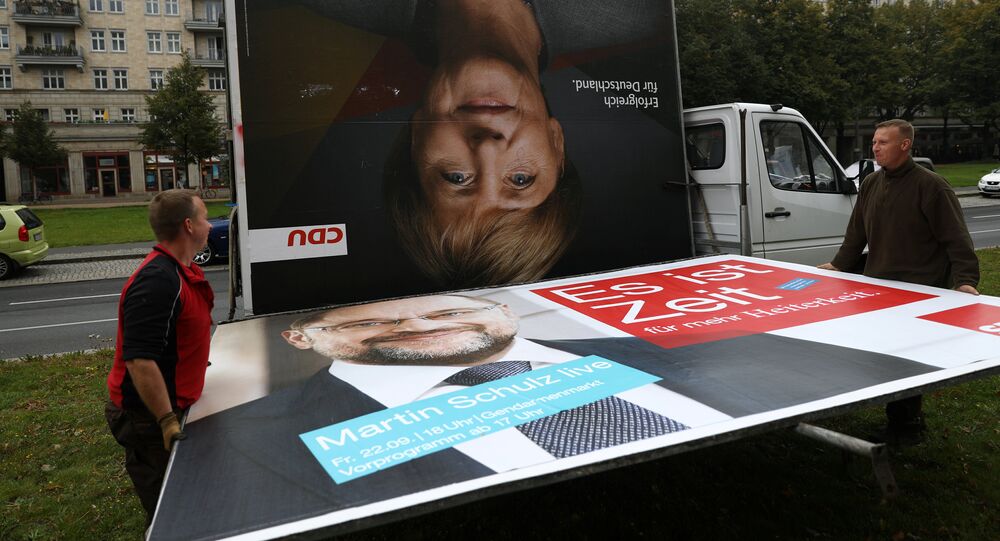 Almost Half of Germans, French, Poles Think US Interferes in Foreign Elections

The majority of the educated European public believe that the US exerts its influence over elections in other countries, according to Sputnik's latest public poll, conducted by the leading French pollster Ifop.

Sputnik asked French pollster Ifop (French Institute of Public Opinion), a renowned international market researcher that has been gathering public opinion for large companies and political parties worldwide since 1938, to discover what Europeans think about the issue of interference in foreign elections in the wake of the accusations of Russia's alleged meddling in other countries.

Russia has been accused by the US of interfering in foreign parliamentary and presidential elections, with the allegations leading to a new round of anti-Russian sanctions levied by Washington.

Ifop interviewed 3,228 respondents over 18 years of age in the UK, France, Germany and Poland, asking them, "Taking into account its political and economic influence and the capabilities of its special forces, which country exerts more influence on the elections in other countries?"

© Sputnik /
Why the Myth of Russian Interference in US Election is 'Destroying American Democracy'
Among the suggested countries were the US, Russia and the EU bloc, other options suggested another country or none.

One-third of the UK residents think it is the US which exerts influence on the elections in other countries. However the percentage is significantly higher in Germany and France (over 40%). Interestingly, both countries held elections this year.

In Poland, which voted in parliamentary and presidential elections in 2015, 43% also point their suspicions towards the US.

Only 21% of the UK residents and less than 30% of continental Europeans, however, believe that Russia has an influence on the voting in other countries.

The number of those who think that the EU interferes in the elections of other countries is almost twice as high in the UK (18%), than in France, Germany or Poland.

Age seemed to have an important influence on the answers, with the tech-savvy under 35’s showing less faith in the impartiality of the US political machine than the older generation.

In all four countries, the poll showed that education also played a factor, with those possessing a higher education choosing the US as the main culprit, in comparison to their less-educated peers.

© Sputnik / Natalia Seliverstova
'To Request Election Interference Press 3': Russian Foreign Ministry Offers VERY Unusual Services
Taking into account the respondents’ existing political preferences, it’s the left wingers who have the strongest belief that the US meddles in other countries’ elections, with supporters of the National Front and the Democratic Movement party less certain.

In Poland, it is mainly the political right(44%) and centrists (43%) who blame the US, while 38% of the left share this opinion.

As for Germany, 46% of Eastern Germans support the idea that the US interferes, versus 39% of the Western Germans polled. Meanwhile, 31% of Westerners think Russia interferes in foreign elections, while only 18% in Eastern Germany share this sentiment.

In the UK, people residing outside the capital think the US interferes more, while about 30% of Londoners support this point of view.