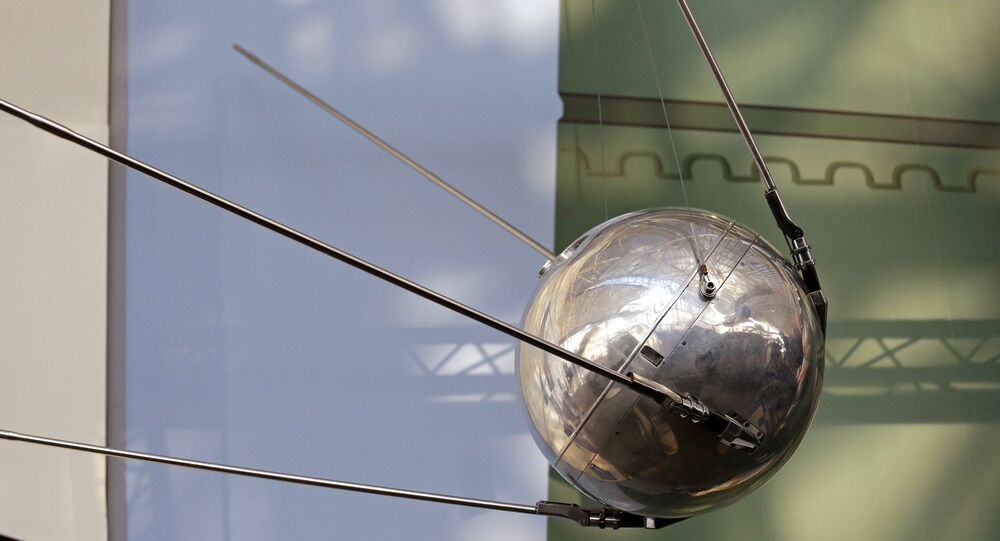 On the 60-th anniversary of the launch of Earth's first satellite, the CIA declassified a bunch of documents on Sputnik-1. The documents claim that while the American public and media were "stunned," US intelligence was not overly surprised. At the same time, they reveal Washington’s embarrassment with the Soviet advances in space at the time.

"US intelligence, the military and the administration of President Dwight D. Eisenhower not only were fully informed of Soviet planning to launch an earth satellite but also knew a Soviet satellite would probably achieve orbit no later than the end of 1957," the released report said.

Youtube / Sputnik
Humanity's First Step in Manned Space Exploration: Yuri Gagarin's Historic Flight
Washington’s concerns about the first country in space emerged several years before the Sputnik launch as such an achievement was regarded as a matter of prestige and military importance. For example, such concerns were voiced in a 1955 letter by CIA Director Allen Dulles to Defense Secretary Charles Wilson.

"The nation that first successfully launches the earth satellite, and thereby introduces the age of space travel, will gain incalculable international prestige and recognition. Our scientific community as well as the nation would gain invaluable respect and confidence should our country be the first to launch the satellite," the letter read.

Dulles also underscored that the successful launch of the first man-made satellite would have a significant "psychological impact" on US allies, neutral countries and, what is more important, "Communist-controlled countries" in the context of the Cold War.

However, several US efforts to launch a satellite failed at the time. The first American satellite, Explorer 1, was fired into orbit only four months after the Soviet launch, on February 1, 1958.

CIA Did not Know the Date of a Soviet Launch

As time was running out before a launch of a Soviet satellite, the CIA understood that it was "imminent." US intelligence, however, did not know the exact date of the launch. On February 8, 1956, a report entitled "US Estimate of Soviet Guided Missile Capabilities" was released.

"Earth Satellite. We estimate that the Soviets are attempting to develop such a vehicle at the earliest practicable date and could have a relatively uninstrumented  vehicle by 1958. A vehicle which could gather and transmit upper atmosphere scientific data could be available by 1963," the document read.

© Photo : Roskosmos
Dawn of the Space Age: Story of Sputnik-1, Earth's First Artificial Satellite (PHOTOS)
Some 18 months later, on June 27, 1957, the CIA released another report entitled "Soviet Preparations for Early Launching of an Earth Satellite" in which American specialists suggested Moscow could launch its first satellite in 1957.

"The USSR probably has the capability of orbiting an earth satellite in 1957. It would be desirable though not mandatory to orbit a satellite within a week before or after the solstice period, about 21 June or 21 December, to enable better observation of the satellite at dawn and dusk," the document read.

The CIA also reiterated in the reports that the US intelligence community was "well aware of the psychological and political advantages" of being the first nation to fire an artificial satellite into orbit.

At the same time, CIA specialists suggested that "the probability of launch failure  is 50 percent and it is possible that the USSR will announce a launch only after it has taken place."

"The USSR will probably make a major effort to be the first country to orbit an earth satellite. We believe that the USSR has the capacity of orbiting, in 1957, a satellite vehicle which could acquire scientific information and data of limited military value. A satellite vehicle possessing substantial reconnaissance capabilities of military value could probably be orbited in the period 1963-1965," read a briefing for Congress dated August 29, 1957.

The released documents contain tons of details about Soviet satellites and missiles, including an analysis of its design, materials, orbital data and radio frequencies. The information was obtained via both open sources and intelligence sources.

© CC0 / NASA / Deep Space Gateway
Roscosmos: International Space Exploration to Continue Despite Geopolitical Situation
As for open sources, the CIA thoroughly analyzed the discussions and speeches of Soviet scientists at international conferences. One of the most cited of them is Anatoliy Blagonravov who coordinated  research of higher atmosphere with the use of rockets in the 1950s. He often participated in international symposiums and conferences.

Moreover, the CIA had access to illegally obtained information. The released documents contain a number of confidential details and mention the names of Soviet secret facilities.

"Observations of models of Soviet satellites and the Mechta space probe and its carrier rocket indicate that aluminum is the preferred material of construction. Reports of a Soviet missile production facility, Plant 82, Tushino, claim that duraluminum and stainless steel sheets were used for missile skins and stainless steel for the nose cones," a document dated January 15, 1960 read.