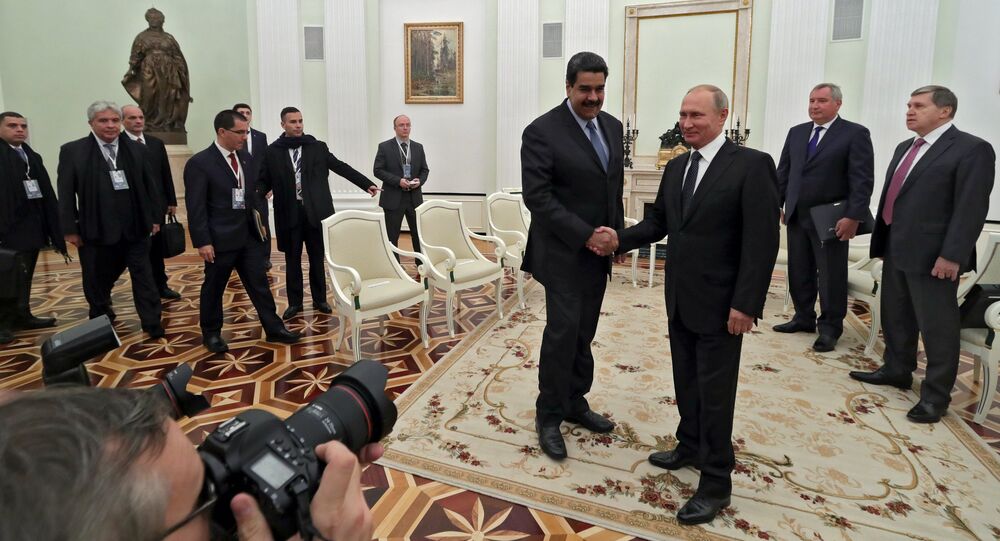 Venezuelan President Nicolas Maduro has come to Moscow for talks with President Putin. Venezuelan political analyst Basem Tajeldine and journalist Jordán Rodríguez told Sputnik that while the Trump administration is bashing their country, the two leaders have sent a clear message to Washington about the expansion of their cooperation.

"The results of the meeting of the two leaders is a clear continuation of the policy of Hugo Chavez, who suggested treating Russia and the BRICS as its close allies. While he was the country's Foreign Minister, Maduro shared this stance and continues to share it now, while holding the post of President," said Jordán Rodríguez about the meeting, which was hosted by Moscow on Wednesday, October 4.

Political analyst Basem Tajeldine, meanwhile, said that the ties between the two countries go far beyond the military sphere, where Russia has gained considerable strength.

© AFP 2020 / THOMAS COEX
President Maduro Says 'Fascist' Group's Plot to Destabilize Venezuela Foiled
"They are consolidating their positions in the energy sector. Both countries have tremendous potential, especially in the oil and gas segment," he said, adding that although Russian is not an OPEC member state, it is a country which should be agreed upon in setting prices, given its importance in the international arena.

Jordán Rodríguez and Basem Tajeldine pointed out that both Venezuela and Russia are currently under sanctions imposed by the US, and it only facilitates the rapprochement between Caracas and Moscow, who share similar views on global politics.

"The governments of the two countries do understand that the war on the oil markets is part of the effort which has been instigated, aimed at impacting the countries which depend on oil incomes. The two presidents, however, have interpreted this conflict very reasonably and addressed such issues as the regionalization of oil prices," said the Venezuelan political analyst.

© REUTERS / Marco Bello TPX
Maduro Puts Army on Alert as Venezuela Threatened by 'the Most Criminal Empire'
Jordán Rodríguez called the meeting a key encounter which comes at a time when the Trump administration is bashing Venezuela. It sends not only a message to Washington but demonstrates a clear opportunity for the further expansion of cooperation between the two countries.

According to the journalist, an alliance between Russia and Venezuela is a "formula of friendship" which is able to stand against military confrontation.

"Venezuelan people lay high hopes on the meeting between Presidents Putin and Maduro. They start viewing Russia as their elder cousin who is always ready to help. It is even more important for Venezuela, which is shown that it is not alone despite the [US] blockade," he concluded.