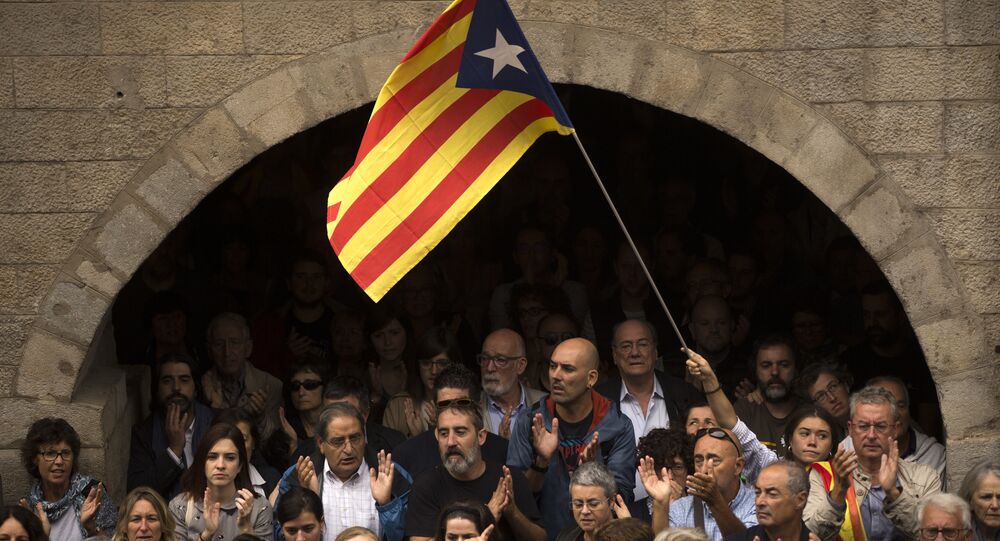 Chief of the Kurdish Regional Government’s foreign relations department has praised the outcome of the voting and slammed the reaction of the Spanish authorities and the UN.

Falah Mustafa, Head of the Department of Foreign Relations for the Kurdish Regional Government (KRG), told Sputnik Turkiye that the Iraqi Kurds support the results of the Catalan independence referendum that was held on October 1.

"There’s no way that we would oppose the demands of other nations that are similar to our own intentions. Since 1905 have been 105 referendums conducted in the world and, according to the published data, 26 of them resulted in a success and led to the proclamation of independence," Mustafa declared.

© REUTERS / Yves Herman
Protesters Rally in Barcelona Amid Catalonia's General Strike (VIDEO)
He criticized the UN’s stance on the matter, stating that the organization should respect the will of the people seeking independence, and stated that the Spanish government’s harsh rhetoric and police violence are completely unacceptable.

"The international community, as well as the Spanish and the EU governments, should reconsider their stance because we’re talking about unarmed civilians, people who decided to come to the voting stations to exercise their democratic rights," Mustafa remarked, adding KRG has no intent of meddling in the internal affairs of Spain.

The KRG representative noted however that it would be inappropriate to compare the situation in Catalonia with the current state of affairs in Iraqi Kurdistan due to certain nuances.

"The Iraqi Kurds are greatly attached to their history, culture and traditions. Throughout our history we have been subjected to chemical attacks and mass extermination, resulting in the suffering of countless civilians. Also, Iraqi Kurdistan was subjected to economic restrictions: one embargo was imposed during the reign of Saddam Hussein and the other was enacted now, after the referendum," Mustafa explained.

He added that Iraqi Kurdistan intends to expand its relations with Catalonia, pointing out that the KRG maintains missions in numerous countries around the world including Spain.

On September 25, residents of Iraqi Kurdistan took part in an independence referendum, with over 90 percent of the voters saying ‘yes’ to Erbil’s drive for sovereignty.