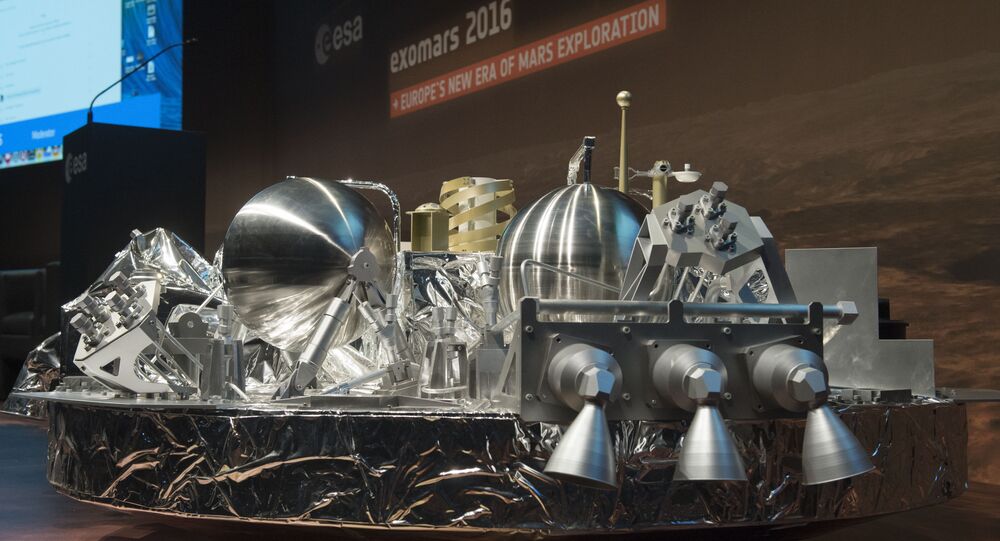 According to the head of the Russian Academy of Sciences' Space Research Institute, the launch of the ExoMars-2020 mission, which will send a European rover to the red planet, is scheduled for July 24, 2020.

MOSCOW (Sputnik) – The launch of the ExoMars-2020 mission from the Baikonur Cosmodrome in Kazakhstan is tentatively scheduled for July 24, 2020, head of the Russian Academy of Sciences' Space Research Institute (IKI) laboratory Daniil Rodionov told Sputnik.

ESA
Russian Devices for ExoMars Mission to Be Ready in Fall 2017
He explained that the Russian-made landing platform and European-made Mars rover would be delivered to the cosmodrome in May 2020, while the landing on Mars was expected to take place in March 2021. Rodionov added that the launch was postponed from 2018 to 2020 to safeguard the projects from the impact of dust storms on the planet.

"There are local dust storms and there are global ones, when once in several years almost the entire surface of Mars is covered with dust. It can be forecast. For example, if the project was launched in 2018, as it had been initially planned, it would have been worse. However, from the standpoint of the positions of Earth and Mars, 2018 would have been more comfortable. But from the standpoint of dust storms, the situation for the launch in 2020 is more appropriate," Rodionov said.

He explained the possibility of dust storms had impacted the service period of a Russian-made landing platform on the surface of Mars, which is expected to operate for one Earth year (approximately half of a Martian year). The Mars rover will have almost the same service life period.

"The Mars rover does not have any precise service life period. It should complete a certain number of operating cycles. I believe that it should work a minimum of 4-5 Martian months [approximately 8-10 Earth months], repeatedly using boring equipment and the whole operating load," Rodionov said.

At the moment, models are being produced. The work on full-size, mass and temperature equivalents of scientific equipment are almost complete. Additionally, the equipment for flight models is being procured.

Two Europe-made scientific instruments – LARA and HABIT – are expected to be delivered to Russia, so that the whole set of scientific instruments could have been connected to the general flight electronics system, tested and then sent to Italy for final assembly in 2018. Throughout 2019, the landing platform and Mars rover will be tested in Cannes and then sent back to Italy. Only after that, the set of equipment will be delivered to the cosmodrome.

ExoMars is a joint mission between the European Space Agency (ESA) and Russia’s Roscosmos space corporation. It aims to prove the existence of methane in the planet’s atmosphere, which could lead to the confirmation of the existence of life on Mars.

A Russian Proton-M rocket carrier lifted off with the ExoMars orbiter and the landing modules from the Baikonur Cosmodrome on March 14. The Schiaparelli lander, which was meant to test technology for the second ExoMars expedition, scheduled for 2020, was ejected from the TGO on October 16, but failed to successfully reach the surface of Mars. The European Space Agency (ESA) has confirmed that the lander crashed.

Russian Devices for ExoMars Mission to Be Ready in Fall 2017