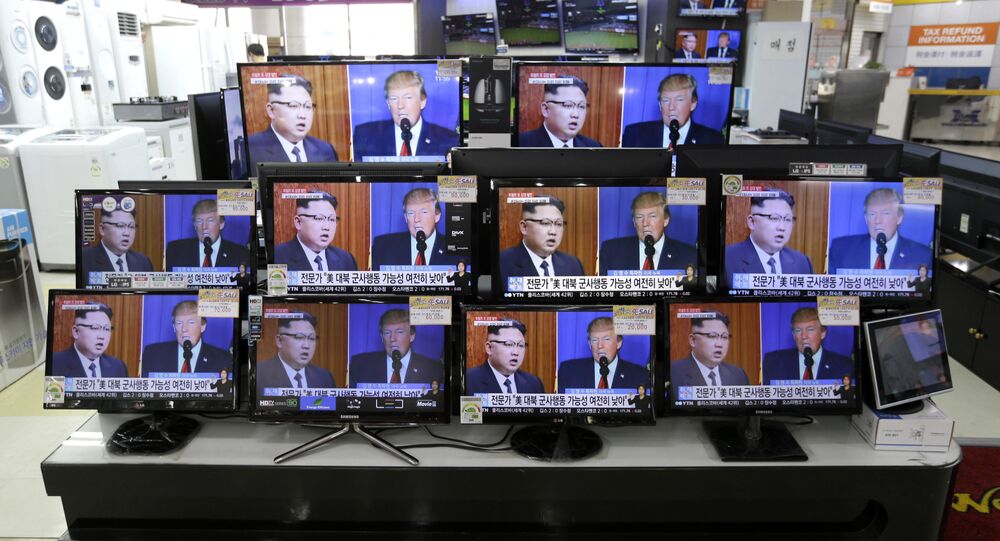 Following the US president's first speech before the United Nations General Assembly on September 19, in which he threatened to "totally destroy" the People's Democratic Republic of Korea (DPRK), and Kim's unprecedented and personal televised response on Friday calling Trump a "mentally deranged US dotard" who would "pay dearly" for his remarks, global leaders have reacted to the growing war of words.

Lu Kang, a spokesman for China's Foreign Minister, attempted to calm tensions on Thursday, stating that the "complicated and sensitive" nuclear issue called for "relevant parties to exercise restraint instead of provoking each other."

In Friday comments on the sidelines of the UN General Assembly, Russian Foreign Minister Sergei Lavrov also called for restraint, offering that Kim and Trump's "kindergarten fight between children" must be eased.

"We have to calm down the hot heads," he said.

Others on the world stage, including leaders of those countries that have long countered US foreign policy, were less politic.

Venezuelan Foreign Minister Jorge Arreaza got to the heart of what many have long opined about the US, that, "of course the country that violates the human rights all over the world seems to have the moral authority to come and speak to the rest of the countries as if they were his employees."

Arreaza also noted that "Trump is not the president of the world."

Even long-serving Zimbabwean President Robert Mugabe — no stranger to controversy — chimed in, declaring of Trump, "Bring us another monster, by whatever name, he will suffer the same consequences," according to CNN.

Leaders of developed countries were no less critical of the strikingly unpopular and politically-polarizing US president's latest tirade.

Canadian Prime Minister Justin Trudeau, while specifically avoiding comment on the heated rhetoric between Trump and Kim, called out the US president for his decision to withdraw from the historic 2016 Paris Climate Accords, stating to the UN on Thursday that "no country on the planet that can walk away from the challenge and reality of climate change."

Luis Videgaray, the Mexican Secretary of Foreign Affairs, questioned Trump's "America First" take on its UN participation, while French President Emmanuel Macron noted that, as nations, "we are inextricably linked to each other in a community of destiny," going so far as to mention a "planetary responsibility," that the US president was ignoring, to his, and his country's, peril.

But Trump's simplistic bellicose rhetoric impressed at least one leader, as Israel's beleaguered Prime Minister Benjamin Netanyahu gushed at the US president's comments, tweeting that he had "never heard a bolder or more courageous speech."

But Netanyahu's cheerleading fell on deaf ears outside of his own party supporters.

Taro Kono, the Japanese Minister for Foreign Affairs, remarked that Trump's increasingly verbal refutation of the Iran nuclear treaty, the Joint Comprehensive Plan of Action (JCPOA), would be resisted globally, as it is "extremely important."

Mogherini asserted that Europe will follow its own course if necessary, declaring, "we will make sure that the [JCPOA] agreement stays."

Trump's words are seen by many in the global academic community as alienating, especially the US president's threats of violence.

Daniel Serwer, the director of the Conflict Management Program at the Johns Hopkins School of International Studies in Washington DC, noted following Trump's UN speech that Washington's "European allies aren't with us on North Korea, Iran or climate change."

Trump is "pretending to lead but nobody is following, Serwer said, adding, "It's that bad."

Trump at the UN: Is the World Trembling or Laughing?