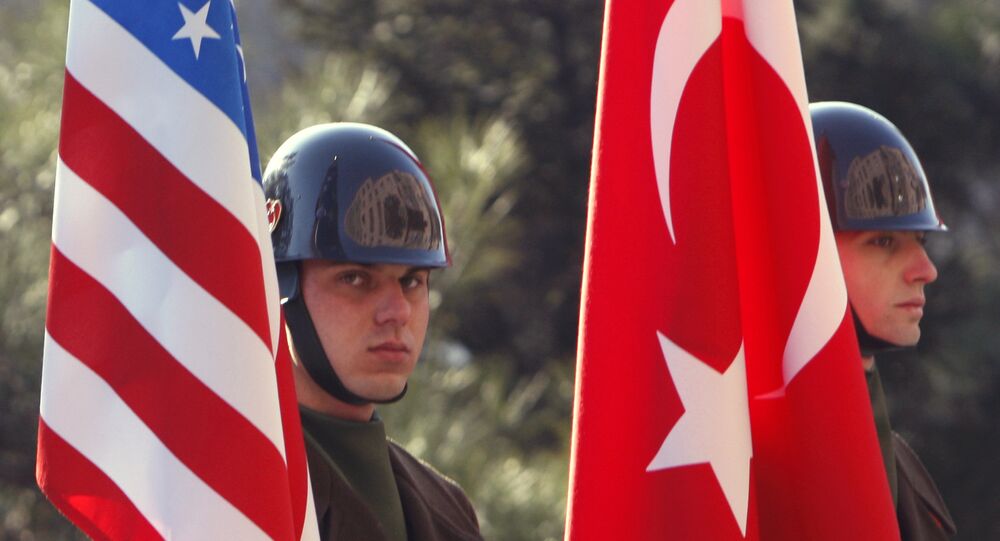 The main reason for Washington-Ankara tension is connected with US disrespect for what Turkey sees as its "red lines", such as Gulen's extradition and stance on the PKK, Ahmet Gencehan Babis of the Turkish Center for International Relations and Strategic Analysis TURKSAM told Sputnik.

Commenting on the US Senate Committee on Foreign Relations' session which dealt with "priorities and challenges in Washington-Ankara ties, Turkish political analyst Ahmet Gencehan Babis attributed the main reason for bilateral tensions to US disrespect for what Turkey sees as its "red lines."

"America should show respect for Turkey's sensitive issues. So far, we have seen quite the opposite. It is difficult to expect an improvement in bilateral relations in a situation where the American side does not support Turkey in its fight against terrorist organizations," Babis told Sputnik Turkey.

© REUTERS / Charles Mostoller
Gulen Explains Why His Extradition to Turkey From US is Unlikely
He added that "the US took under its wing organizations that Turkey considers terrorist, something which has created and will continue to create serious problems in bilateral ties for a long period of time."

"The main stumbling block between Ankara and Washington is related to the extradition of FETO leader [Fethullah Gulen]. Thus far, US authorities have not made any statement or step which would inspire hope for a favorable outcome for Turkey in this matter," Babis said.

He also recalled that the US had refused to send experts to Turkey to train Turkish pilots for F-16 fighter jets.  According to him, Washington insisted on Turkish pilots being trained in the US while continuing to support terrorist organizations operating near the Turkish border.

"Such behavior has nothing to do with the notion of allied relations. Turkey is certainly right in its reproaches in relation to the United States on on this matter," Babis pointed out.

He warned that "if the US position in this [matter] does not change, Turkish-American relations will further exacerbate". At the same time, he said that "one should understand that Turkey, as a member of NATO, cannot easily withdraw from the alliance."

"So the status quo should prompt the US and Turkey to act more carefully and cautiously towards each other," Babis concluded.

During a session of the US Senate Foreign Relations Committee last Wednesday, Turkey was described as Washington's "ally [in NATO], but not a partner."

In addition, senators came to the conclusion that Turkey's plans to purchase S-400 systems from Russia "run counter to the interests of Turkey's allies in NATO."

They said that they expect Ankara to take "steps that would demonstrate its unilateral adherence to allied relations."

© AP Photo / Selcan Hacaoglu
Why US Refuses to Send F-16 Trainers to Turkey, Blocks Pakistan's Help
On July 15, 2016, the Turkish authorities said that an attempted coup was taking place in the country which was suppressed by the next day. About 250 people died during the coup attempt.

The Turkish government accused Fethullah Gulen, an Islamic preacher living in the United States, of involvement in the coup and demanded his extradition to Turkey. Washington has so far refused to do so.

The Kurdistan Workers' Party (PKK) has been involved in an armed conflict with the Turkish state since 1984. The PKK's initial aim of achieving an independent Kurdish state was later changed into a demand for equal rights and Kurdish autonomy within Turkey.