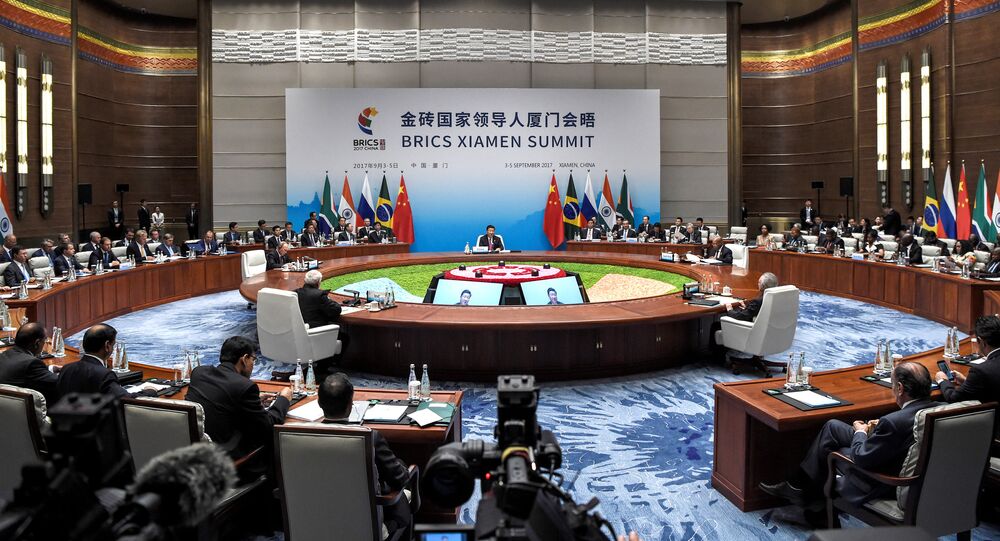 Beijing recently called for the expansion of the BRICS group, which currently includes Brazil, Russia, India, China and South Africa. In an interview with Sputnik, Victoria Panova, a senior strategic planning advisor to Russia's National Committee for BRICS Research, gave her thoughts on the matter.

Commenting on Beijing's push to expand the membership of BRICS, Russian expert Victoria Panova said that first and foremost, the focus should be placed on attracting BRICS allies rather than including more states in the organization.

"First, BRICS should establish concrete mechanisms of interaction and only then think about inviting other countries to join the group," Panova said.

© Sputnik / Igor Ageyenko
BRICS Member States Express Interest in Eurasia High-Speed Railway
She added that "on the one hand, we really need to form a certain circle of friends of BRICS countries, that is, we understand that we will not have real expansion [of the organization] in the near future."

Panova warned against BRICS' isolation, saying that the group should attract more allies from emerging and developing countries.

"Namely, BRICS positions itself as kind of an alternative format which is more transparent as compared with the G7, for example. That's why BRICS should be open to the non-Western world, where they ought to find allies, something that is the bottom line of China's initiative," she said.

Panova described China as a global power which is unsuccessfully trying to find regional allies which could be ready to cooperate with Beijing.

"In any case, I see the BRICS expansion as an unlikely scenario," Panova pointed out.

What's next for BRICS? Check out our 5 takeaways from speeches by President #XiJinping at Xiamen #BRICS2017 summit! #XinhuaSpecial pic.twitter.com/ZLhCRPS2wR

Founded in 2006, BRICS is an association of five major emerging national economies, including Brazil, Russia, India, China and South Africa, which represents almost three billion people and about 20 percent of the world's GDP.

© Sputnik / Grigoriy Sisoev
China Urges BRICS to Put More Efforts to Achieve Just International Order
In July 2017, the international press quoted Chinese Foreign Minister Wang Yi as saying that "Beijing will consider the possibility of a BRIC+ format in order to start a dialogue with other major developing countries."

"We hope to establish broad partnerships and expand our circle of friends so as to turn it [BRICS] into the most effective platform for South-South cooperation," Yi said. He declined to elaborate on what countries could be included in BRICS+.