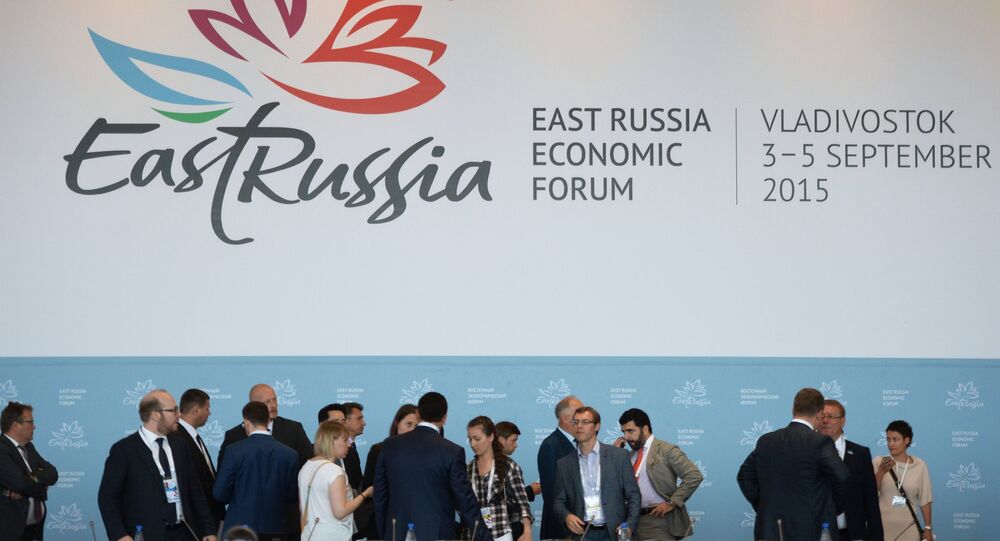 Japan’s Kawasaki Heavy Industries Representative Director Shigeru Murayama on Wednesday in an interview to Sputnik talked about the industrial cooperation between Russia and Japan.

"The Kawasaki Heavy Industries, which I represent, is specifically interested in the energy area. As far as we know, the Far East has no centralized network, and power generation is more localized. We have our own technologies of power generation. As far as we know, you [Russia] mostly use coal, so if the Russian authorities are interested in terms of ecology to replace coal with gas, we could cooperate in this area," Murayama said on the sidelines of the Eastern Economic Forum (EEF) in the Russian city of Vladivostok.

© Sputnik / Michael Klimentyev
Russia, Japan Working on Ambitious, Previously Unattainable Projects
Murayama, who is also the president of the Japan Association for Trade with Russia and the Newly Independent States (ROTOBO), added that energy and natural resources already are "traditional sectors of the Russian economy where Japanese companies are represented," and named agriculture, medicine and healthcare, as well as urban planning, among the "new areas" of cooperation.

"As for the export from Japan, [the exports of] such items as engines, building equipment and materials and car components, are increasing. The increasing export of construction equipment and materials from Japan especially indicates that Russia is actively constructing new facilities. It shows that the situation in the Russian economy is improving and the economy is stabilizing," Murayama said on the sidelines of the Eastern Economic Forum (EEF) in the Russian city of Vladivostok.

By the way, the trade between Russia and Japan has increased by 35-36 percent when compared to 2016.

"As for the import from Russia to Japan, the volume of the import itself may not be changing. But still, given that the prices for energy resources have been recovering recently, and that Japan has seen a disaster on a nuclear power plant and is now actively importing energy resources, particularly gas, for its stations, the demand for Russian natural gas in Japan is increasing," Murayama added.

© REUTERS / Kyodo
Japan to Collaborate With Russia, China to Implement UNSC Resolution on N Korea
He explained that the stabilizing prices for energy resources and the gradual revival of both Russian and Japanese economies shows that "the critical point of our [Russian-Japanese] trade has been passed already."

In addition, Japan and Russia will discuss healthcare and restaurant projects in the Russian Far East during the Eastern Economic Forum (EEF) in Vladivostok, Shigeru Murayama, the President of the Japan Association for Trade with Russia and the Newly Independent States (ROTOBO), told Sputnik on Wednesday.

"There are some specific ideas that will be introduced and discussed during this forum. For example, new cooperation is developing in agriculture, medicine and healthcare areas, one that did not exist between our regions [Japan and the Far East] before," Murayama said.

The two-day EEF started in Vladivostok on Wednesday, gathering over 3,500 participants from more than 50 countries. A number of world leaders are attending the forum, including Russian President Vladimir Putin, his South Korean counterpart Moon Jae-in, as well as Japanese Prime Minister Shinzo Abe. Rossiya Segodnya International Information Agency is a general media partner of the forum.