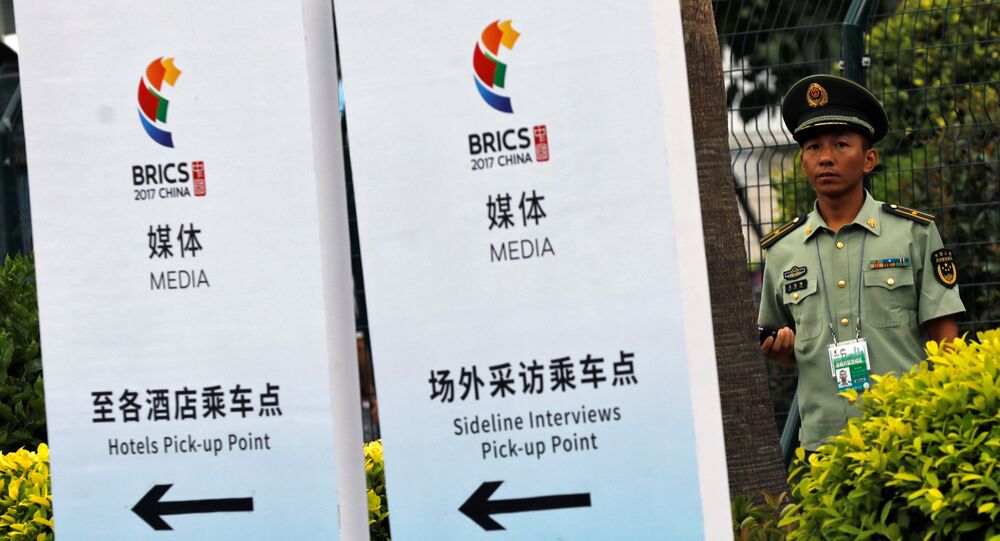 A "BRICS Plus" format applied this year for the group's summit in China's southeastern city of Xiamen is not related to the idea of the bloc's expansion, member of the press office of the Brazilian Foreign Ministry told Sputnik on Sunday.

XIAMEN (China) (Sputnik) – Leaders of five BRICS countries are now arriving to the coastal city to take part in the BRICS summit on September 3-5. China as the hosting nation has also invited the heads of states that represent regions from all various parts of the world, including Egypt, Mexico, Thailand, Guinea and Tadjikistan. Inviting non-member states is a common practice for BRICS meetings, but guest countries usually come from the same region as the host.

"Outreach exercises are a well-established practice in BRICS Summits. These exercises have been carried out during BRICS Summits since 2013 and traditionally involve BRICS leaders and leaders from countries of the regional surroundings of the member that holds the presidency. Brazil supports this exercise. This year the Chinese presidency invited countries from various continents. However, outreach exercises are not related to any idea of BRICS expansion," the member of the press office said.

© Sputnik / Zhanna Manukyan
Brazil Aims to Boost Economic Development at BRICS Summit in Xiamen
Chinese officials did not disclose whether the extension of the format would automatically make the other invited nations permanent partner nations for BRICS. The summit in Xiamen is expected to shed light on this.

"Brazil has high expectations of the Xiamen Summit. The agenda of the 9th BRICS Summit includes important international issues, such as economics and international economic governance; peace and security; people-to-people exchanges; institutional development and the 2030 Agenda for Sustainable Development," the press office member added.

The key topics at the upcoming summit are expected to be regional and global security, trade regimes and measures to fight protectionism, ways to boost information security, work of the New Development Bank as well as cultural and humanitarian cooperation.