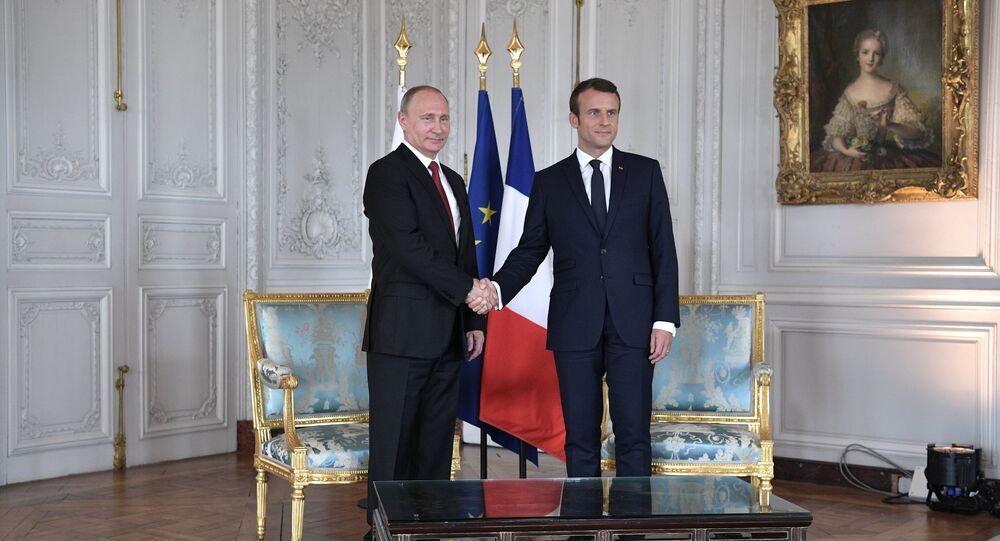 Why Macron Courts Dialogue With Russia After Denunciation in Kiev

Commenting on French President Emmanuel Macron's recent statement about the importance of maintaining dialogue with Russia despite the two countries' differences regarding Ukraine, a Russian expert told Sputnik that the French leader's behavior in dealing with the matter is somewhat inconsistent.

In an interview with the French magazine Le Point earlier this week, Macron said that Paris and Moscow have "absolutely different approaches on Ukraine," but that the two countries nevertheless managed to launch a civil society dialogue and agreed on a spate of issues related to climate change and Syria.

Speaking to Sputnik, Russian political analyst Vladimir Olenchenko said that Macron's statements are out of line with the current situation.

"I don't quite like the tone [of these statements]. If France is interested in a dialogue to resolve concrete international problems which will lead to stability, it would be great. But now Paris adheres to the principle that one country should help another country in implementing a task," Olenchenko said.

© Sputnik / Aleksey Nikolskyi
Putin Shares Macron's Readiness to Talk, Differences Should Not Be Obstacles
"Syria, Ukraine and an agreement on climate change are international problems rather than those of France [alone]. And here we need to talk about an equal dialogue, not about priority pertaining to assistance or concessions," he added.

According to Olenchenko, Macron behaves inconsistently when it comes to the Ukraine issue.

He recalled that "there is a mechanism related to the Normandy Four [format], something that was not created by Macron."

"This mechanism does not work because Ukraine is sabotaging the implementation of the existing accords. The Normandy Four  members, namely, Germany and France, could put pressure on Kiev but thus far, I haven't see them doing so," Olenchenko said.

"Macron signaled his readiness for talks [with Russia], but we should bear in mind that some time ago he met with [Ukrainian President Petro] Poroshenko and directly called Russia 'an aggressor.' In this vein, the question is how we can understand when Macron is speaking sincerely and when he is simply engaged in demagogy," Olenchenko pointed out.

Commenting on Macron's willingness to launch the dialogue with Russia, Olenchenko recalled that such a dialogue is already under way.

"Substantial negotiations between Macron and Russian President Vladimir Putin took place in May, and almost three months later, Macron [suddenly] indicates his intent for bilateral dialogue. It can be interpreted as his signal that he did not forget about the negotiations or his concern not to be on the verge of the [negotiating] process," Olenchenko said.

He also drew attention to Macron's plummeting approval rating, which is why Olenchenko suggested that Macron's statements were first of all addressed to France's domestic policy and the French population.

The Presidents of Russia and France met in Versailles on May 29, with bilateral relations as well as the situation in Syria and Ukraine high on the agenda of their talks.

© Sputnik / Kirill Kallinikov
France Considering Cooperation Agreement With Russia on Election Technologies
According to Vladimir Putin, during the talks both sides tried to find common ground on the main international problems and finally managed to do so.

Kiev entered into deadly armed confrontation with Donbass militia in 2014, after the self-proclaimed Lugansk and Donetsk People's Republics (LPR and DPR) refused to recognize the new Ukrainian government that came to power in what they perceive to be a coup.

The sides to the conflict continue to exchange fire, despite the ceasefire deal that reached in Minsk in February 2015. The peace deal was brokered by the so-called Normandy Four (Normandy Quartet) that comprises Russia, France, Germany and Ukraine.