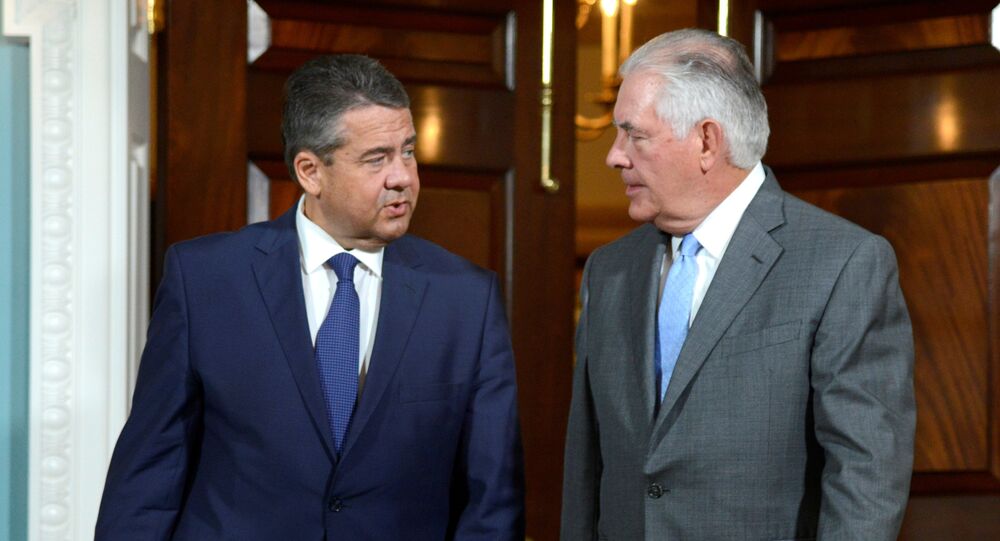 It is only natural that German politicians are floating the idea of banning the US from maintaining a nuclear arsenal in their country, a Russian expert told Sputnik, referring to political bargaining and public opinion.

Commenting on statements made by the German Foreign Minister and the German Social Democratic Party leader, Alexander Kamkin of the Institute of Europe, a Moscow-based think tank, said that the anti-war sentiments in Germany are intensifying for quite certain reasons.

He said that "Europeans sometimes find it hard to comprehend militant rhetoric by [US President Donald] Trump regarding North Korea, NATO structures and the strengthening of the American presence in Europe."

"The bottom line of the two German politicians' statements can be considered the Social Democrats' consolidated position rather than their pre-election move. This is something that they will obviously put forward and try to implement regardless of who will be the next German Chancellor," Kamkin said.

© CC0
'Americans Preparing for War': Why US Testing B61-12 Nuclear Bomb
He noted that that "this initiative was put forward earlier by German politicians, but it did not find understanding among [Berlin's] transatlantic partners and was put on the back burner."

"Whether Shulz and Gabriel will succeed this time in convincing the Americans to withdraw their nuclear weapons [from Germany] is a big question," he added.

"But this is also a topic for political bargaining and negotiations. And, of course, this may help attract more votes because anti-war sentiment in Germany is a public trend," Kamkin pointed out.

Early last week, Martin Schulz, leader of the German Social Democratic Party (SPD) and candidate for the post of German chancellor, pledged to ask Washington to withdraw US nuclear weapons from German territory if he defeats Chancellor Angela Merkel in federal elections next month.

Responding to Schulz's comments, German government deputy spokesperson Ulrike Demmer said that the government supports the "global zero" goal, namely, the complete abandonment of nuclear weapons, and that this goal is shared by many of Germany's NATO and EU allies.

"Political, ethical, and practical opposition to US nuclear weapons in Germany goes back decades."https://t.co/jEP9jk5F6V #de

About 20 US B61 nuclear warheads are presently thought to be stationed at a military base in Buechel, in western Germany.

© AP Photo / Yves Logghe
Schulz Using 'US Nuclear Umbrella' in Germany as Last Means to Take Over Merkel
Germans will go to the polls in federal elections on September 24. Most political observers believe that Chancellor Merkel is set to win a fourth term.

On August 8, the United States completed the second series of flight tests for an upgraded version of its B-61 nuclear bomb, following the first tests in March.

The tests were conducted as part of a program to extend the life of the B61 gravity bomb, which is one of the main pillars of the US Air Force's nuclear arsenal.