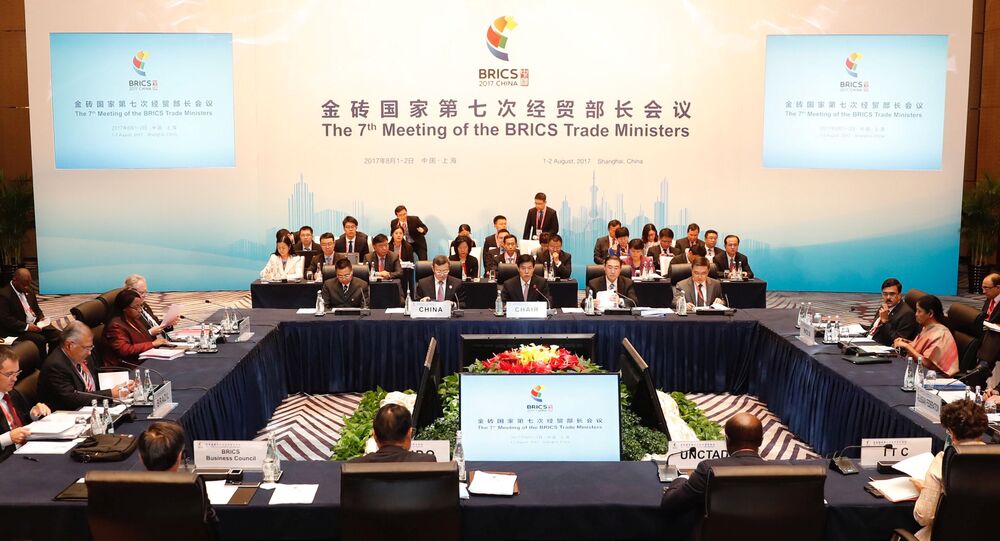 BEIJING (Sputnik) — Other BRICS states share Russia's view on unilateral sanctions, imposed by Western countries, and there are no contradictions on the issue within the bloc, Russia's Ambassador to China Andrey Denisov said Monday.

"China and other BRICS states, but mostly our Chinese partners are, like Russia, against unilateral sanctions, against sanctions as a tool of political pressure. Hence we have no problems with our BRICS partners. Our assessments of recent developments is understood," Denisov told a press conference ahead of the BRICS Summit in the southern Chinese city of Xiamen.

© Sputnik / Vladimir Pesnya
New Anti-Russian Sanctions Reveal Congress Rivalry With US State Dept
He added that the issue of sanctions might be raised at the BRICS summit in light of the bloc's efforts in opposing protectionist policies.

"The issue of sanctions is not our problem. It is a problem of those who imposed these sanctions. It is they who should lift them. It is very likely that these issues will be discussed, probably not alone, but in the context of countering the policy of protectionism in global politics," the diplomat said.

On August 2, US President Donald Trump enacted a law tightening the sanctions against Russia, North Korea and Iran. The law also prevents the US president from removing the sanctions on Russia without congressional approval. The move has been criticized by the Chinese government, which said that disputes arising between different countries should be settled on the basis of mutual respect through and appropriate, fair dialogue, rather than through unilateral restrictive measures.

In general, in 2014, relations between Russia and the West began to deteriorate over Moscow's alleged involvement in the Ukraine crisis and Crimea's reunification with Russia. The United States and the European Union imposed several rounds of sanctions on Russia's energy, banking, defense and other sectors, as well as on a number of Russian officials.