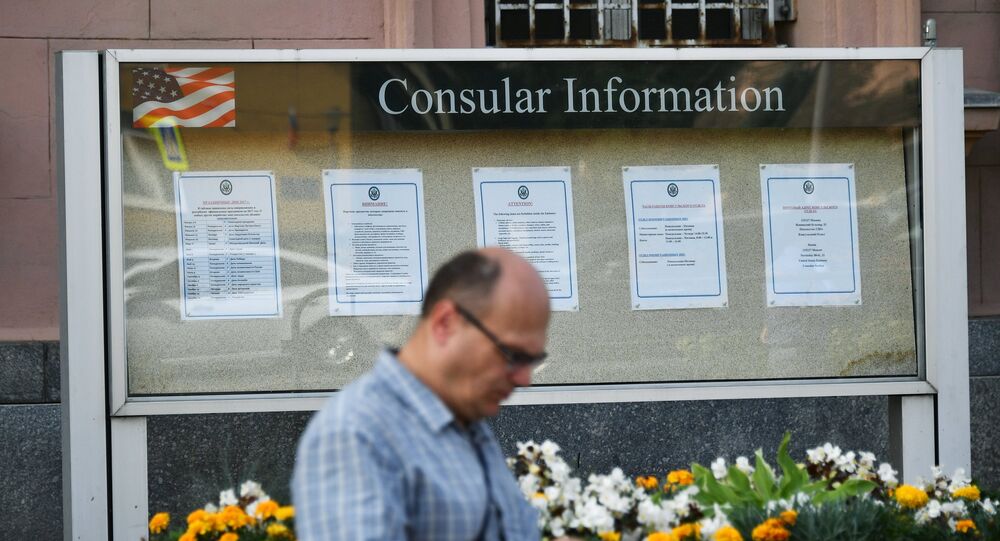 Washington's decision to make the US Embassy in Moscow the only place Russian citizens can receive non-migration visas will negatively affect the tourism flow to the United States, Russian Federal Agency for Tourism (Rosturism) head Oleg Safonov said Wednesday.

MOSCOW (Sputnik) – On Monday, the US embassy in Russia announced that non-migration visa processing would be suspended from Wednesday, after Moscow required that the US diplomatic mission in Russia cut its staff to 455 employees. It is expected that the embassy will resume issuing visas on September 1, exclusively in Moscow.

"Unfortunately, I think that this will have a negative effect on the tourist flow. I think it will decrease as it will be more difficult, more expensive and less convenient for our citizens to get the visa. Hence, this, for sure, will lead to a drop in the number of tourists," Safonov said.

© AP Photo / Alexander Zemlianichenko
US' Russia Visa Suspension a 'PR Stunt' and a 'New Round of Diplomatic Standoff'
He added that the limits in visa services cause complications for Russian travel agencies, as Russian would-be tourists willing to visit the United States are now facing uncertainty over the visa waiting period. At the same time, people from outside of Moscow will have to spend a lot of time and money just to attend a visa appointment at the capital-based embassy, Safonov said.

According to the Rosturism head, the new regulations will not have a serous impact on the overall Russian outbound tourism figures, as the number of tourists visiting the United States is not that high.

"The limitations, I hope, are temporary. I hope the situation will improve, and the visa granting process will return to the prior, rather active regime," he added.

In late July, Moscow announced that the diplomatic presence of the United States in Russia would be cut by 755 people to 455, the same number of diplomatic personnel that Russia currently has in the United States. The Kremlin said it was a response to the 2016 expulsion of 35 Russian diplomats and sanctions passed by the US Congress in July.

Moscow Criticizes Work of US Visa Departments in Russia