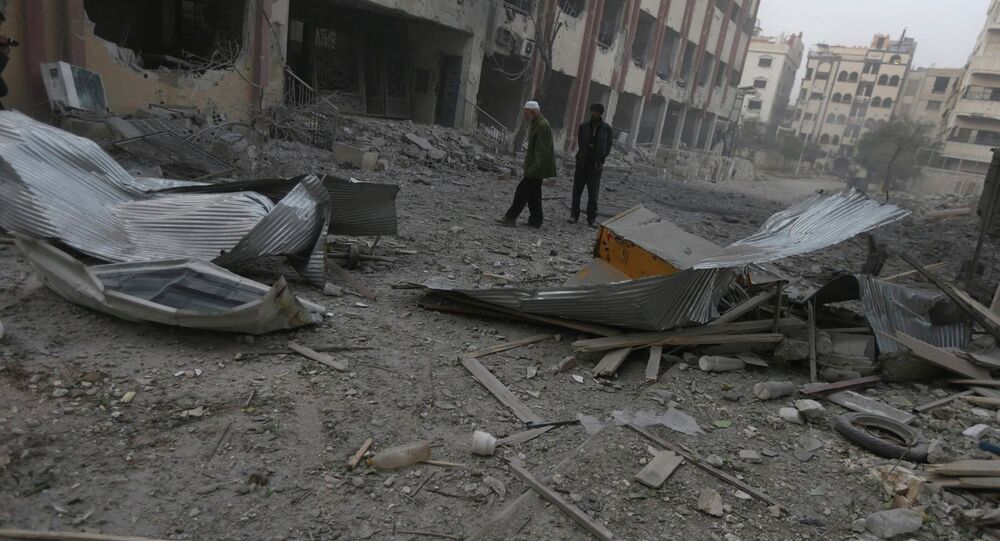 Telling Tales: Why US Continues to Write 'Assad and Chemical Weapons Saga'

Amid the numerous successes of the Syrian army, Washington deliberately ramps up the rhetoric about the alleged use of chemical weapons by Damascus so as to demonize Syrian President Bashar Assad, a Russian military expert told Sputnik.

In a speech earlier this week dedicated to the 4th anniversary of the deadly Ghouta chemical weapons attack, US Ambassador to the UN Nikki Haley called for the prosecution of those involved in the use of toxic agents in Syria.

Touting efforts by the international community to eliminate the chemical weapons program in Syria, Haley claimed that President Assad allegedly "continues to use chemical weapons in attacks on his own people."

© REUTERS / Mohamed Abdullah
Treaty Violation? Damascus Claims to Find US, UK Chemical Weapons in Syria
She specifically referred to a chemical weapons incident in the city of Khan Sheikhoun on April 4, 2017, when she alleged "a Syrian plane dropped a sarin gas bomb."

Speaking to Sputnik, Russian military expert Andrey Koshkin said that it is no accident that the alleged use of chemical weapons by Assad's government remains high on Washington's agenda even though no evidence has been provided.

"The United States and the whole of the West are writing a sort of detective saga titled 'Assad and the Chemical Weapons'. This is a very profitable theme to constantly draw the world’s attention to the allegations that Bashar Assad is a very bad president," Koshkin said.

He added that "today we see the successes of the Syrian government troops which come against the background of the fourth anniversary of the Ghouta chemical attack which was most likely conducted by the Syrian opposition."

"The US sees these two aspects as a 'new page' to make the global community believe that Assad is a 'fearful regime' that allegedly uses chemical weapons against his own people. But these allegations have never been confirmed," Koshkin said.

According to him, those in the White House "even came up with the term 'remote investigation' in order to cheat ordinary people [in the US] and work themselves into a state."

© REUTERS / Ammar Abdullah
A civil defence member breathes through an oxygen mask, after what rescue workers described as a suspected gas attack in the Syrian town of Khan Sheikhoun, April 4, 2017

On April 4, 2016, the National Coalition for Syrian Revolutionary and Opposition Forces, supported by the United States, blamed Damascus for the Khan Sheikhoun incident that left 80 people dead, including children, and injured 200 more.

© Sputnik / Mikhail Voskresenskiy
'Wishful Thinking': What's Behind US Playing Out 'Chemical Weapons Scenario' in Syria
The Syrian army strongly rejected the accusations and laid the blame on local militants. The Syrian authorities said that they had never used chemical weapons against civilians or terrorists, and that the nation's entire chemical arsenal had been destroyed under the control of the OPCW.

Moscow: US Claims on Chemical Weapons May Be Aimed to Interfere in Syria Affairs