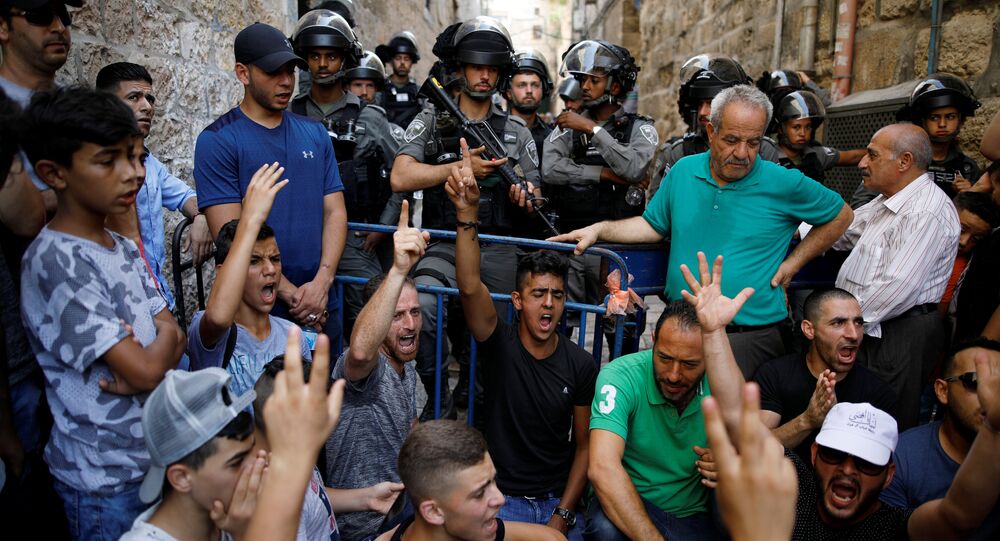 Palestinian Negotiator Accuses US of Stimulating Israel to Carry Out 'Apartheid'

Palestinian chief negotiator Saeb Erekat said that the absence of a clear declaration by the United States that the final goal of the peace process is the implementation of the two-state solution formula encourages the Jewish state to implement an "apartheid" policy toward Palestinians.

© AP Photo / Mahmoud Illean
Israeli Forces Detain 21 Palestinians, Including Lawmaker in West Bank
GAZA (Sputnik) — The lack of US support for the principle known as the two-state solution formula or adequate reaction to Israel's settlements policy encourages the Jewish state to implement an "apartheid" policy toward Palestinians, Secretary General of the Executive Committee of the Palestine Liberation Organization (PLO) and Palestinian chief negotiator Saeb Erekat said.

"The absence of a clear declaration by the United States that the final goal of the peace process is the implementation of the two-state solution formula within the 1967 borders and the silence regarding the activation of Israel's colonial settlement policy are perceived by the Israeli government as an opportunity to destroy the two-state solution," Erekat said in a statement, adding that Israel is thus seeking to implement an "apartheid" policy by building a single state with two systems.

In May, US President Donald Trump visited Israel as part of his first official, overseas trip in a bid to promote peace between Israelis and Palestinians, and contribute to agreements between the two sides.

© AP Photo / Andrew Harnik
US to Consult With Jordan’s King on Israeli-Palestinian Issues - Trump
On June 21, Trump’s son-in-law and adviser Jared Kushner and Special Representative for International Negotiations Jason Greenblatt met with Israeli Prime Minister Benjamin Netanyahu and Palestinian Authority President Mahmoud Abbas during a trip to Jerusalem and Ramallah. Kushner's objective was to reaffirm the White House’s commitment to the goal of a lasting peace deal between the Israelis and Palestinians.

On Monday, media reported, citing leaked Kushner's comments, that the US administration might not have anything "unique" to propose to settle the Israeli-Palestinian conflict.

In March, the UN Economic and Social Commission for Western Asia (ESCWA) accused Israel of applying "apartheid regime" policies regarding the Palestinians.