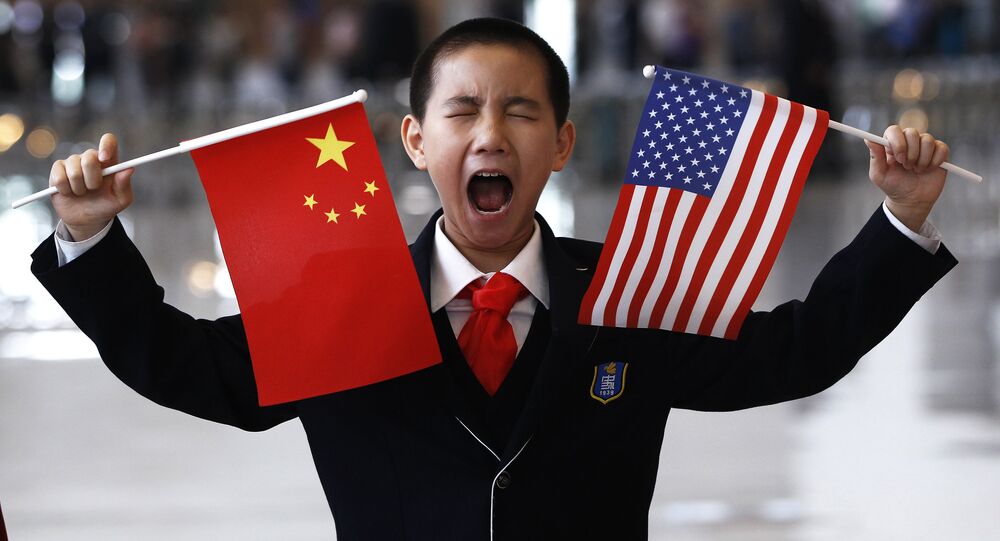 Isolated America? What if China Really Responds to Suggested US Sanctions

Commenting on the recent US media reports that Washington is "crafting a set of economic measures meant to punish China," a well-known Chinese economist said that it is unaccepted to talk with Beijing as if it is a small- or a middle-size state. Chinese media, meanwhile, suggested how China could strike back.

© REUTERS / Jason Lee
Anti-China Sanctions: The Real US Aim in Asia, and How Beijing Can Respond
On Monday, the US-based magazine Politico reported that "President Donald Trump’s top advisers are huddling behind the scenes in a bid to craft a set of economic measures meant to punish China" for "not doing enough to stop North Korea from building a nuclear weapon."

Citing sources from the US administration, the outlet suggested that a final decision on the possible punitive measures, including trade restrictions, is "expected as soon as this week."

Commenting on the reports, a well-known Chinese economist, who refused to disclose his name, told Sputnik that the US position is "absolute nonsense" and it is unacceptable to talk with Beijing as if it is a small- or a middle-size state.

The reason behind the current deadlock in the settlement of this nuclear issue is not China's approach towards it. It could not be resolved only with the help of China's unilateral efforts or with the suggested US sanctions.  If the issues can't be resolved with the suggested methods, China shouldn't bear all the responsibility for it, the expert said.

There should be sincere and real efforts from various countries. The analyst went on to ask what the connection was between trade and economic ties between China and the US on one hand and the developments on the Korean Peninsula on the other.

© CC0
When is the World Going to Impose Sanctions on America?
The development of trade contracts between China and the US should not have any connection with the internal affairs of the US, nor should it affect any other countries.

The Chinese economist also commented on the recent tweets of the US leader that he is "very disappointed in China," which is doing "NOTHING for us with North Korea, just talk[s]. We will no longer allow this to continue. China could easily solve this problem!"

"If any country is bound up by political factors in its trade and economic relations, it creates additional uncertainties in its position. President Trump likes to create a phony image and weight with the help of Twitter. However it only has an effect only on small- and middle-size countries and does not work with China.  China is able to defend its position," he told Sputnik.

Meanwhile, the Hong Kong-based South China Morning Post suggested how China could strike back. It published a list of the American companies which would suffer the  most in a trade war with Beijing.

© AFP 2020 / NICOLAS ASFOURI
'Growing Mistrust Between China and US' at Heart of North Korean Antagonism
"China’s 2016 box office takings edged up 3.7 per cent, sputtering after the previous year’s astonishing 48 per cent growth. Still, that’s 45.7 billion yuan (US$6.7 billion) in receipts, second only to the US, and 42 per cent of takings were by foreign movies," the newspaper said.
It further explained that China’s government only allows three dozen imported movies every year on a revenue sharing basis, where the studios get 25 percent while the Chinese distributor gets the lion’s share.
Hollywood studios have been lobbying China to increase the import quota and to concede a larger share of revenue, and have threatened suits at the World Trade Organization if an agreement isn’t reached by 2018, it said.

The newspaper explained that China’s airlines will need 6,800 new aircraft valued at US$1 trillion over the next two decades, according to a November 2016 forecast by Boeing, while competitor Airbus puts the estimate at 6,000 planes worth US$945 billion.

"Either way, that’s the biggest single aviation market in the world. In previous trade and financial disputes — from trade imbalance to concerns about the yuan’s value — with the US or with the EU, China’s state-owned carriers would typically make a bulk order of aircraft from either the American or the European manufacturer to smooth over the disputes," it said.

© AFP 2020 / NICOLAS ASFOURI
US to Overtake EU as China's Largest Trade Partner
"Boeing is banking on Chinese airlines to take delivery of three in every 10 of its best-selling 737 models, enough to support 150,000 American jobs. Boeing is scheduled to open its first overseas completion center for 737 planes next year, in Zhoushan in Zhejiang province. Airbus already does the final assembly of its competing A320 aircraft in Tianjin," it said.

Also on the list is Apple: "the Greater China region comprising the mainland, Hong Kong and Taiwan made up 25.3 per cent of Apple’s 2016 operating income, not a market to be trifled with."

Starbucks, General Motors, Ford, Chrysler and Wal-Mart Stores also have a lot to lose in case China wants to retaliate, the outlet concluded.