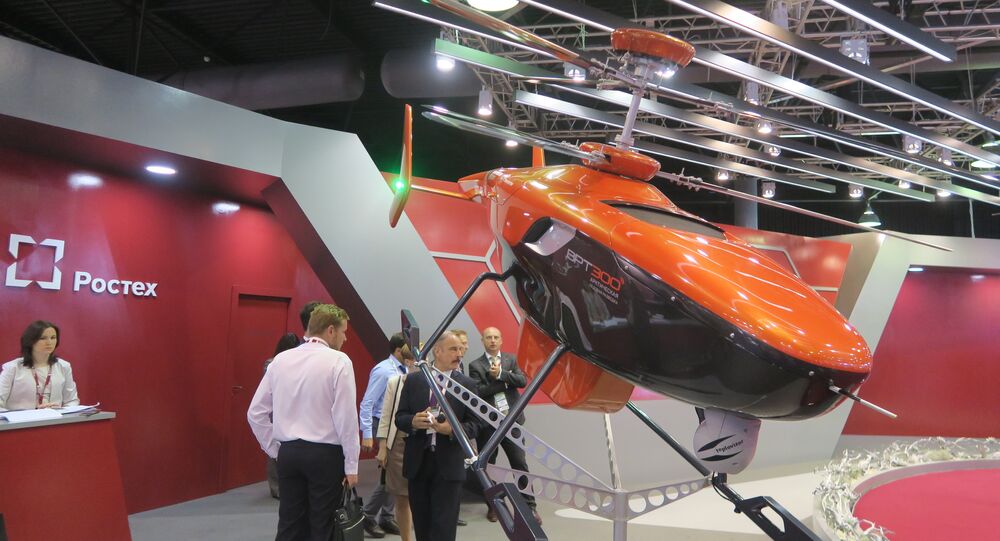 China has expressed interest in buying a Russian unmanned helicopter designed to help in the exploration of the Arctic. The vehicle was presented at the MAKS-2017 air show currently under way in Zhukovsky outside Moscow.

An Arctic version of the VRT300 vehicle has already generated interest from the Chinese, the Russian Helicopters press service told Sputnik.

The VRT300's Arctic Supervision version is equipped with a side-scan radar for conducting ice reconnaissance and operations in the Arctic.

Another version of the VRT300, Opticvision, boasts an increased range of flight for monitoring and remote probing.

"The VRT300 Arctic Supervision is designed for developing the transport system of the Northern Sea Route, as well as assistance in the development of the Arctic. The vehicle is equipped with an on-board side-scan radar of the X-band high resolution capable of quickly assessing the dynamics of the ice situation. The vehicle's diesel engine and the ship-based capability make the VRT300's Arctic version indispensable for both icebreakers and drilling platforms," the press service said.

The 70-kg target load makes it possible to use the vehicle for the transportation of various cargoes from a ship to a polar station and back. Other tasks include the assessment of ice thickness on the path of a vessel, support of search and rescue operations at sea and the discovery of large ice areas suitable for locating scientific polar stations.

"The development of the Arctic is of paramount importance to China which plans to become one of the operators of the Northern Sea Route in the near future. In this regard, the [Russian Helicopters] holding notes the interest of potential customers from China toward the Arctic version of the VRT300," the press service added.

Earlier, it was reported that China is interested in developing the Arctic together with Russia, in particular, transporting up to 15 percent of its external cargo traffic to the Northern Sea Route.

© Photo : Russian Helicopters
A Russian convertible aircraft is on display at the MAKS-2017 air show

© Photo : Russian Helicopters
A Russian convertible aircraft is on display at the MAKS-2017 air show

The VRT30 is seen as a sort of flying laboratory to help create a convertiplane with a take-off mass of up to two tons in the future.The advantage of aerial vehicles, made according to the scheme of a convertiplane, is that their operation does not require the presence of a runway.

© Sputnik / Vladimir Astapkovich
'Simply Mind-Blowing!': Russia's T-50 5th Gen Fighter Steals the Show at MAKS-2017 (VIDEO)
In addition, thanks to the rotary mechanism of the screws the convertible aircraft is capable of both developing high speed and performing tasks in the hovering mode.

By the fourth quarter of 2017, the VRT30 convertor is due to enter the second stage of testing, during which it will be tested in various flight modes, weather conditions and with target payload elements on board.

The press service of Russian Helicopters told Sputnik that the VRT30's serial production is scheduled for the end of 2018.