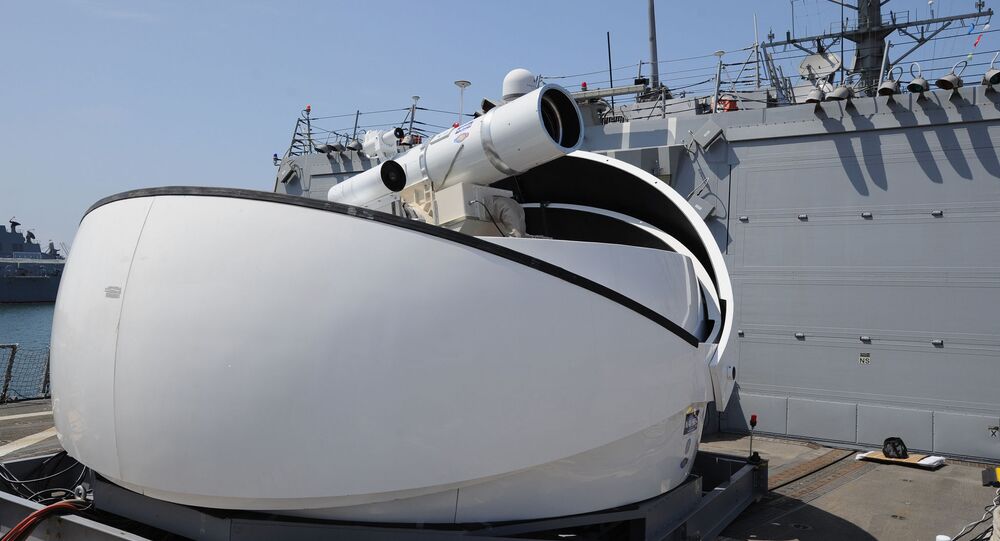 Challenges for deploying lasers as battlefield weapons are not easily solved, despite demonstrations that beams of concentrated light can destroy small targets such as drones and speedboats, former US House of Representatives Armed Services Committee aide Subrata Ghoshroy told Sputnik.

© AP Photo / US Navy, John F. Williams
US Laser Weapon Tests in Persian Gulf Are 'Warning Signal to Iran' (VIDEO)
WASHINGTON (Sputnik) — On July 18 in the Persian Gulf, the US Navy warship Ponce conducted a live fire test using its laser weapons system known as LAWS. Footage from the demonstration showed the LAWS disabling an airborne drone and a speedboat similar to those used by Iran.

"There is no doubt lasers can destroy targets," Ghoshroy, now a researcher with the Massachusetts Institute of Technology [MIT], said on Wednesday. "The challenges are not easily solved for lasers to become deployable battlefield weapons."

In 2014, the Ponce conducted nearly the same LAWS test in the Persian Gulf with similar targets, according to the Office of Naval Research.

Ghoshroy told Sputnik that his assessment of the 2014 test published in a Bulletin of the Atomic Scientists report still holds.

"Fiber-based lasers consume about ten times as much power as their older brothers — and reliably generating that huge amount of energy under battlefield conditions is a challenge," Ghoshroy wrote in May 2015.

Ghoshroy concluded that lasers, or directed energy weapons, offer the tantalizing possibility of being game changers, but they will not likely be ready for prime time in the battlefield anytime soon.