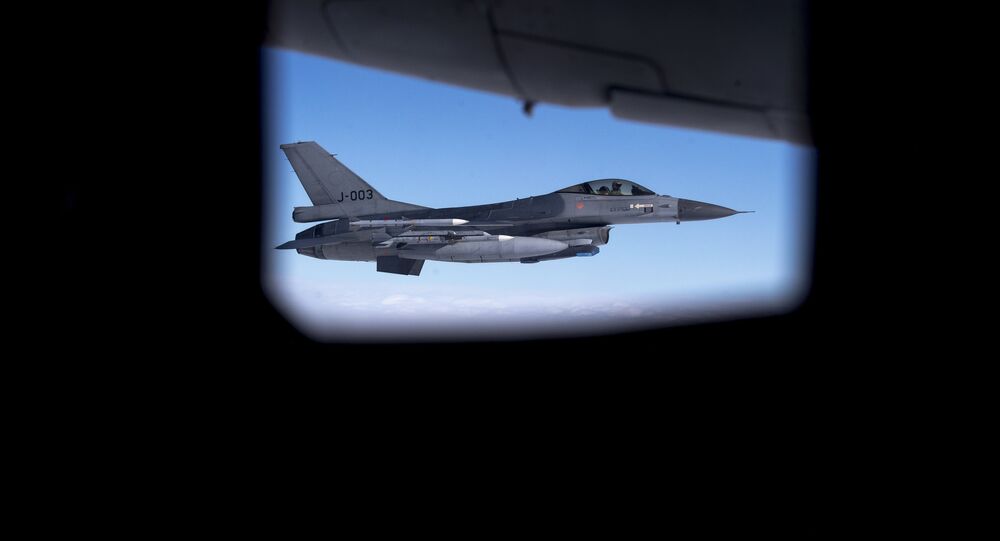 © AP Photo / Czarek Sokolowski
Is NATO Preparing for 'Military Aggression Against Russia'?
The Russian Defense Ministry said on its website that Russian jet fighters have conducted at least six intercepts of foreign reconnaissance planes near Russia's borders in the past week.

In mid-June, 14 such intercepts were carried out by Russian warplanes, according to the official newspaper of the Russian Defense Ministry Krasnaya Zvezda (Red Star).

On June 21, a NATO F-16 fighter aircraft attempted to approach the plane carrying Russian Defense Minister Sergey Shoigu over neutral Baltic waters, but was promptly chased away by a Russian Su-27 fighter jet.

Speaking to Sputnik, Russian military expert Boris Rozhin recalled that the past few years have seen more and more NATO reconnaissance near Russia's borders. At the moment, he says that this activity is connected to NATO's drills in the Baltic States.

© Sputnik / Igor Zarembo
Pentagon Reveals Mid-Flight Photos of Russian Su-27 Intercepting US Military Aircraft
Earlier this week, Politico quoted a NATO official said as saying that the alliance will express its frustration about "the aggressive and dangerous maneuvers of Russian military pilots over the Baltic Sea" during a Russia-NATO Council meeting.

Golovatyuk told Spuntik that even though NATO planes often violate rules applying to flights over neutral waters, the alliance does not think twice before pointing the finger at Russia.

"I believe that NATO was simply frightened about our flights over the Baltic Sea and the Kaliningrad region, where we have a large military grouping, so they think that these flights are allegedly unsafe and can cause incidents. There are specific rules for flying over neutral waters, and we do not violate them, and we do not enter any territory," Golovatyuk said.

He referred to a recent incident with a NATO fighter jet which tried to drive a Russian transport plane into a zone of turbulence. "And only the appearance of our fighter prevented negative consequences," according to Golovatyuk.

"So they [NATO members] themselves are not very clean in this respect, and let them first pull out the 'log' from their own eyes, before they start to blame us," he added.

"For example, NATO planes will provoke our military pilots in order to accuse us of some unsafe actions. It's clear that any such situation may lead to a catastrophe and the main thing is not to react to these provocations," he concluded.

© Sputnik / Alexey Malgavko
Russian Su-27 Vs. US RC-135: 'Russian Spy Jets Don’t Fly Along US Borders'
On June 20, Russia scrambled its fighters to intercept a US Boeing RC-135 surveillance plane, and on June 6 Russian fighters intercepted a US B-52 strategic bomber which attempted to approach Russia's borders; both intercepts took place over the Baltic Sea.

In June, Russia's MiG-31 and Su-27 fighters were scrambled in response to 23 flybys, most of them by US planes, according to Krasnaya Zvezda.

The newspaper estimated that US RC-135 planes and Global Hawk drones had been involved in ten reconnaissance missions; four such mission were conducted by Norwegian P-3 Orions, and three by Swedish Air Force's Gulfstream intelligence planes.

What We Know About NATO-Russia Council