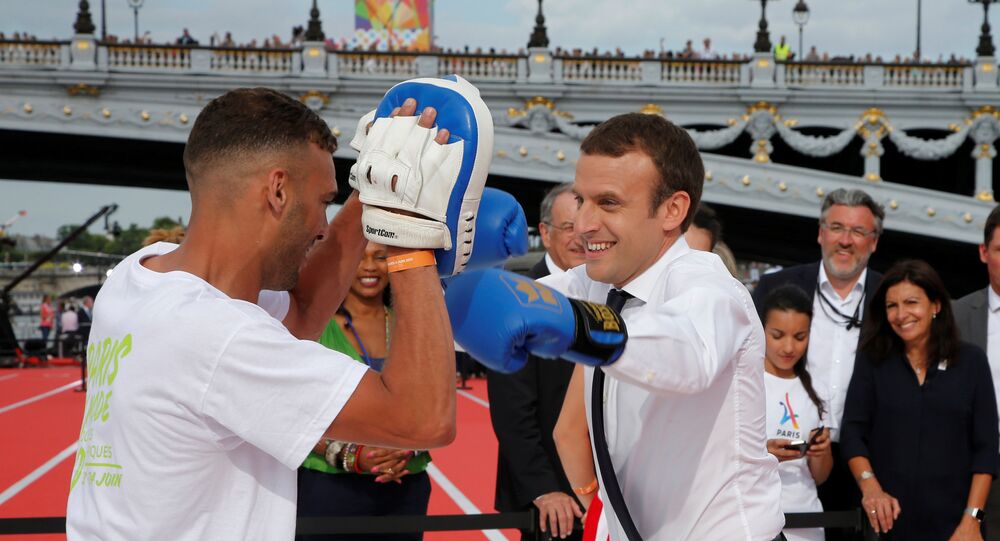 After almost two months in office, French President Emmanuel Macron still provokes public outcry by boxing, playing tennis in a wheelchair and examining a nuclear powered submarine. Sputnik looks into how Twitter users are reacting to the presidency Macron-style.

Some Internet commentators suggest, somewhat sarcastically, that each day of the French leader is thoroughly planned and devoted to a certain topic, among them sport and traveling.

Needless to say, each and every step taken by Macron is thoroughly documented across an array of social networks, so that Internet users are always kept in the loop regarding his presidential events.

Macron’s personal Twitter page shows him getting on board a ship, playing tennis, boxing and scoring a goal.

On the eve of the first round of the French parliamentary elections, Macron and his wife Brigitte appeared in public in the resort of Le Touquet.

French President Emmanuel Macron returns the ball while sitting in a wheelchair as he plays tennis on the Pont Alexandre III in Paris pic.twitter.com/0CEffI5xdq

The French press has surprisingly remained tight-lipped on all this, unlike the Twitterati with one of them saying that "for Macron, France is a big amusement park."

"Macron onboard a ship, a plane and a submarine – it's clear, you elected a five-year-old boy [in the person of Macron]," another Twitter user said.

"Moviemakers of 'Macron on a bicycle in Le Touquet', 'Macron in Versailles' and 'Macron sits on a train' now present 'Macron on a submarine'," this tweet reads.

Strike a Pose: Why is Macron Flexing His Military Muscles?