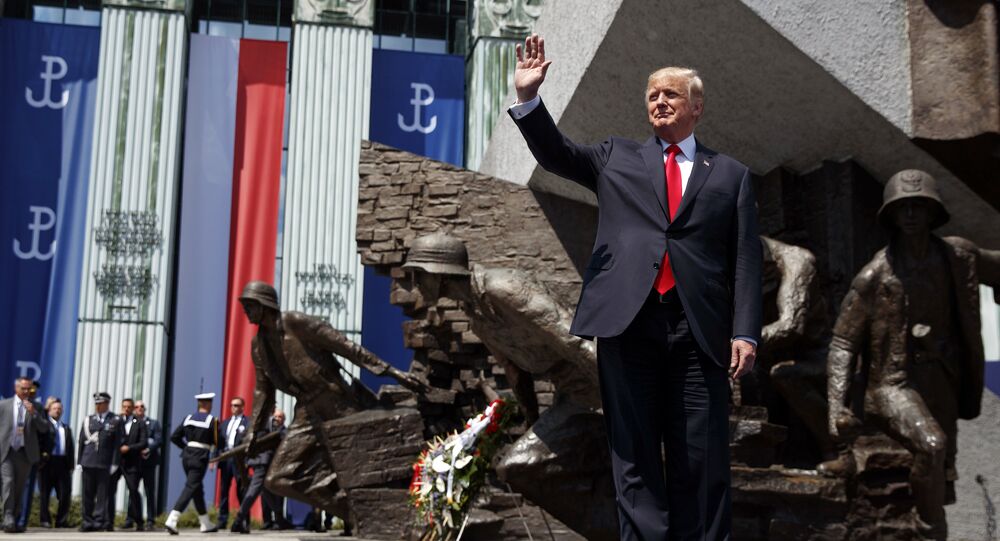 One of the goals of US President Donald Trump's recent speech in Warsaw was to motivate Poland to fight Germany amid ongoing conflicts inside the European Union, Russian blogger Ivan Danilov wrote in his article for RIA Novosti.

© REUTERS / Carlos Barria
Trump in Poland: ‘Western Civilization’ Must Defend its Values
Earlier this week, US President Donald Trump delivered a speech in Warsaw, during which he made a number of stern remarks regarding Russia, something that provoked a negative reaction from the Russian media and among Russian experts.

In particular, Trump called on Russia to "cease its destabilizing activities in Ukraine and elsewhere, and its support for hostile regimes, including Syria and Iran."

He also urged Moscow to "join the community of responsible nations in our fight against common enemies and in defense of civilization itself."

In his article for RIA Novosti, Russian blogger Ivan Danilov said that "acute emotions about Trump's speech are understandable, but it seems that for its interpretation, it's necessary to look at the situation through the eyes of an economist."

"From an economic point of view, the goal of Trump speech was to ensure the sale of very expensive American gas to Poland, force Poland to pay billions of dollars to NATO, that is, the US military and industrial complex, and to motivate Poland to fight Germany in the context of conflicts within the European Union," Danilov said.

© AP Photo / Evan Vucci
'Very Expensive Visit': Poles to Pay for Gas, Missiles, Even Melania's Outfits
He added that Trump deliberately mentioned Russia and the so-called "Russian threat" as well as historical conflicts between Russia and Poland in order to achieve the above-mentioned goals, "and we must admit that the American president did it brilliantly."

According to Danilov, Trump resolved the first two goals by actually offering the Poles a sort of bonus in the form of "independence from the Russian [gas] supplies" and "presenting NATO as a very expensive but necessary medicine for all geopolitical risks."

"Trump's last and most difficult task was to persuade Warsaw "to bravely pursue an open and difficult conflict with Berlin" amid the struggle for the preservation of American control over the European Union," Danilov said.

© REUTERS / Agencja Gazeta/Jacek Marczewski
A man stands in front of a banner against U.S. President Trump ahead of his public speech in Warsaw, Poland July 6, 2017

He added that "to achieve this goal, it was necessary to turn off the Poles' rational thinking, as well as their historical memory."

"This is needed in order to forget how Poland ended up after it simultaneously had to confront Russia and Germany.  Warsaw has made few such attempts in the past, and each time they ended with the disappearance of Poland from the world map," Danilov pointed out.

According to him, "staging an open conflict with the EU's most powerful state whose economic and political power allows it to claim the status of the EU leader is political suicide for Poland."

"To achieve his goal, Trump uttered the most pathetic part of his speech, in which he nearly announced a crusade in defense of Western values, praised Poland for being faithful to the ideals of the collective West and, of course, promised 'protection and constant support' from the United States," Danilov said.

© AP Photo / Alik Keplicz
Best Snub of 2017? Poland’s First Lady Rejects Handshake From Trump (VIDEO)
He did not rule out that "Warsaw's future adverse remarks against Moscow and Berlin will be perceived by Polish politicians as elements of a holy war in defense of Western civilization from German and Russian barbarians."

"However, experience shows that counting on overseas assistance in a conflict with immediate neighbors is a lose-lose strategy," Danilov concluded.

Trump Says Had 'Great Experience' During Visit to Poland