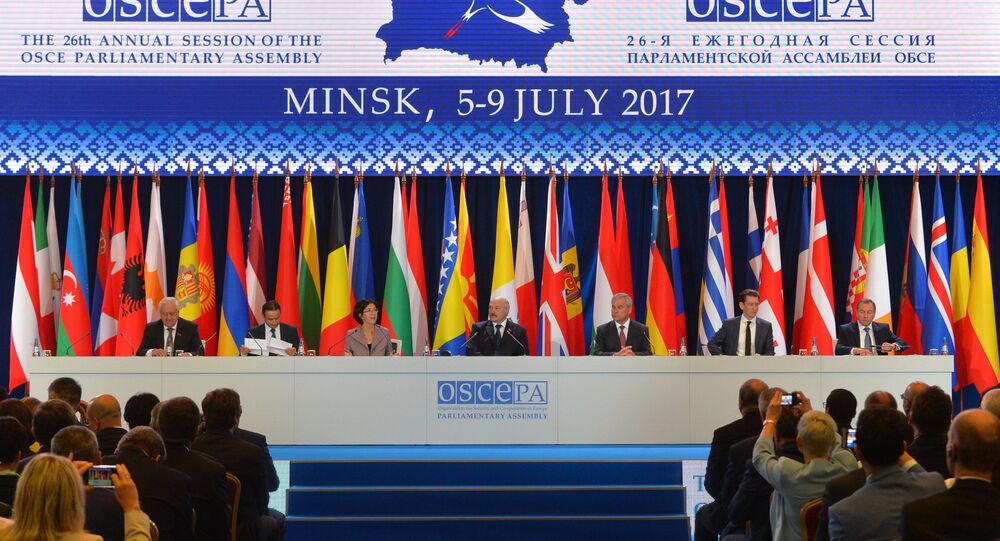 The 25th Annual Session of the Organization for Security and Co-operation in Europe Parliamentary Assembly (OSCE PA) voted on Sunday in favor of a resolution on "Strengthening the role of the OSCE in countering terrorism" proposed by Russian delegate Nikolay Kovalev.

© Sputnik / Viktor Tolochko
OSCE PA Supports Russia's Proposed Resolution Against Religious Discrimination
MINSK (Sputnik) – The resolution stressed the crucial role of parliaments in helping to counter terrorism and called on the OSCE states to take a decisive action to neutralize the threat posed by the propagation of the ideology of terrorism in the Internet and the social media.

The document reaffirms respect for the sovereignty, territorial integrity and political independence of the OSCE participating states and underscores the central role of the United Nations in countering terrorism recognizing the need for all actions to be undertaken in conformity with the UN charter.

The resolution calls on the OSCE participating states to take effective measures so that anyone who participates or assists in the financing, planning, preparation or perpetration of terrorist acts is brought to justice.

The document also calls for the establishment of a counter-terrorism committee within the framework of the OSCE Parliamentary Assembly to work toward a convergence of the approaches of the participating states in combating the terrorist threat and to coordinate their actions in this regard.