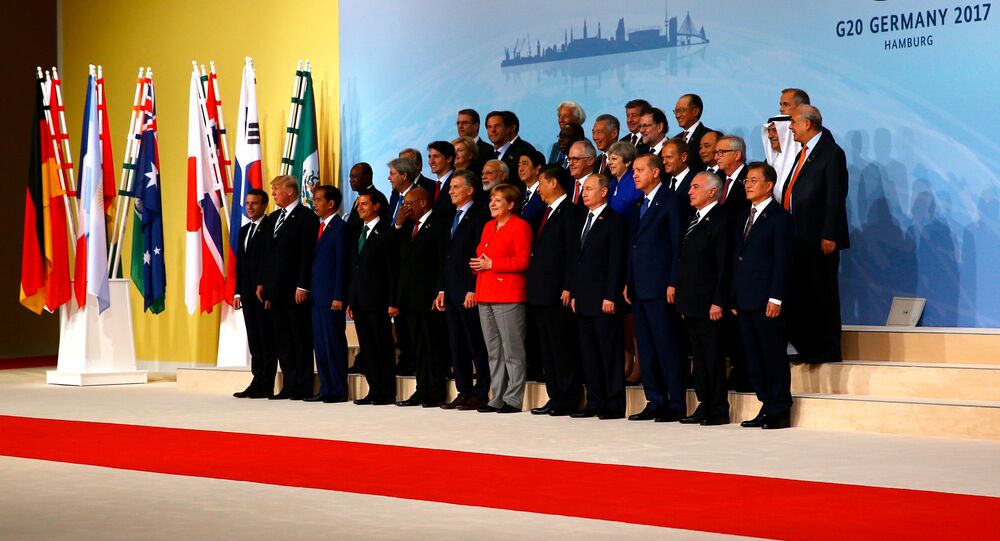 The second day of the G20 summit in Hamburg saw a whole array of significant talks, including those which brought together the Presidents of Russia, Turkey and China.

© Sputnik / Michael Klimentyev
Putin on Meeting With US President: Trump You See on TV is Very Different From the Real Person
Although the second day of the G20 summit was less interesting than the first one, it saw a number of important meetings involving Russian President Vladimir Putin and his Turkish and Chinese counterparts Recep Tayyip Erdogan and Xi Jinping, respectively, according to Gevorg Mirzayan, an associate professor of the political science department of the Russian government's Financial University.

In his article for RIA Novosti, he recalled that during the first day, Vladimir Putin met his US counterpart Donald Trump for their first-ever talks, during which they agreed on a number of pressing issues related to Syria, Ukraine and cybersecurity.

The Kremlin press service announced on July 8 that Russian President Vladimir Putin, his French counterpart, Emmanuel Macron and German Chancellor Angela Merkel discussed the conflict in Ukraine and its settlement during a working breakfast on the sidelines of the G20 summit on Saturday.

"The situation in Ukraine and ways of settling [the conflict] were discussed," the statement said.

A look into the body language of the world leaders at the G20 summit in Hamburg. pic.twitter.com/PTRFhW0SAQ

"The President explained the Russian position to the interlocutors briefly but comprehensibly, as he always does," Peskov said.

"There is an understanding that it is necessary to take effective measures that would lead to a real cease-fire on the contact line and ensure the removal of heavy weapons from there," he added.

On Friday, Putin and Trump agreed to establish a bilateral channel of communication between representatives of Russia and the United States to promote the peaceful settlement of the conflict in Ukraine, something that will, notably, be implemented on the basis of the Minsk peace agreements.

Russia, Germany and France, along with Ukraine, are members of the so-called Normandy Four, which is seeking the political settlement of the Ukrainian conflict which erupted in 2014 after the overthrow of former president Viktor Yanukovych.

"Another star of the G20 summit in Hamburg was Turkish President Recep Tayyip Erdogan, a real outcast of the Western world," Mirzayan said.

He added that some experts hoped that during the summit the Turkish leader would finally manage to repair relations with Europe, but to no avail.

Erdogan was never able to reconcile with Angela Merkel at the summit, and it was reflected during his final speech.

As for Erdogan's meeting with US President Donald Trump, it was not planned but at the end of the day, the two leaders managed to hold a 20-minute talk on the sidelines of the G20 summit.

"However, it is unlikely that the parties arrived at a consensus during the talks, given their differences regarding the Kurdish issue.  Washington supports the Syrian Kurds because it sees them as the only US allies in postwar Syria, but for Erdogan, the Syrian Kurds, with their push for autonomy, pose a threat to Turkey's national security. If the US does not understand and accept the Turkish stance, the US should also be seen as a threat, according to Ankara," Mirzayan said.

In this regard, Erdogan's cooperation with Moscow has been much more fruitful, he believes.

"If Ankara wants to avoid complete isolation, it has to cooperate with Moscow and accept Russian conditions of the game in Syria, including President Bashar Assad remaining in power," Mirzayan added.

Erdoğan, Merkel hold talks ahead of G20 summit as the tension between the two countries escalates https://t.co/nAsdCYNdpg

On Saturday, Vladimir Putin said at a press conference after the G20 summit and discussed the ongoing Syrian conflict with his Turkish counterpart Recep Tayyip Erdogan. Putin believes that certain compromises can take place sometimes.

"That's why we will also move forward on the other issues, on the other de-escalation zones… We had very detailed talks on this issue with the Turkish president," Putin said.

"To a great degree it does not depend on us. A lot of is connected with the contradictions among the regional countries. Everyone has their own concerns, their own preferences, their own interests and legitimate interests. We should look for compromises. You know that sometimes we succeed in doing it," he pointed out.

"During such meetings, the East Asian leaders typically try to save face, so if we look at official media reports, it may seem that the parties have not clinched any breakthrough agreements," Mirzayan said.

"The Chinese leader noted that, despite some positive exchanges between the parties, Japanese-Chinese relations are being led aside by complex factors: there can be no compromises on history or Taiwan, and Japan should respect China's position on this issue," according to the state-run Chinese news agency Xinhua.

The Japanese media outlets in turn reported that Shinzo Abe demanded that the Chinese side should "tame" North Korea and make Pyongyang stop its provocations.

"In fact, China would very much like to help Japan resolve the North Korean issue, given that Kim Jong-Un's provocations first of all ride roughshod over China's interests. However, Beijing is tired of explaining to everyone that it is unable to force Kim to dance to China's tune," Mirzayan said.

He described all this as "an abnormal relationship between two immediate neighbors," saying that "Abe and Xi will continue to work in order to create an atmosphere of trust between Beijing and Tokyo."

"This is a very tricky task and the G20 alone is certainly not enough to resolve it," Mirzayan concluded.

© Sputnik / Michael Klimentyev
The Meeting the World Waited For: What did Putin and Trump Manage to Agree Upon?
The two-day G20 summit brought together leaders from the world's 20 top industrialized nations in the German city of Hamburg. However, it has been marred by violent protests against this way of making decisions that affect the world.

On Friday, Trump held talks with Russian President Vladimir Putin on the sidelines of the G20, in their first-ever face-to-face meeting. US Secretary of State Rex Tillerson said they had very positive chemistry.

Trump, for his part, described the first day of the summit as "great" and said he was "looking forward to day two."