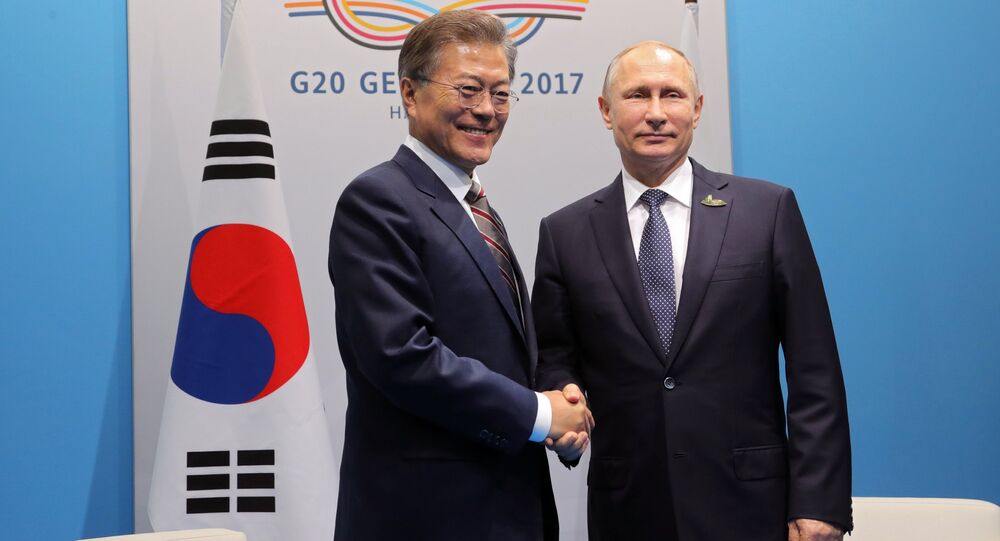 Russian President Vladimir Putin and his South Korean counterpart Moon Jae-in are meeting on the sidelines of the G20 summit in Germany's Hamburg.

© AFP 2020 / JUNG Yeon-Je
South Korea Foreign Minister Hopes to Develop Strategic Partnership With Russia - Foreign Ministry
MOSCOW (Sputnik) – The leaders are expected to talk about the situation on the Korean peninsula as well as expanding bilateral cooperation, according to Kremlin aide Yury Ushakov.

The diplomatic relations between Russia and South Korea were established on September 30, 1990.

On September 6, 2013, Putin held the first bilateral meeting with South Korean then-President Park Geun-hye, elected on December 19, 2012. The negotiations took place on the sidelines of the G20 summit in St. Petersburg.

In November 2013, Putin paid an official visit to South Korea. After the high-level talks, the parties signed a package of documents stipulating bilateral cooperation in various fields. Putin addressed participants at a closing plenary meeting of the Russia-Republic of Korea Dialogue forum. The Russian president also attended the ceremony of unveiling a monument dedicated to Russian poet Alexander Pushkin in Seoul and laid flowers at a monument to deceased sailors of the Russian cruiser Varyag and anti-submarine corvette Koreyets in Inchon.

On February 21-24, 2014, South Korean Prime Minister Chung Hong-won paid an official visit to Russia and attended the opening ceremony of the XXII Olympic Winter Games in Sochi. On February 22, he held negotiations with Russian Prime Minister Dmitry Medvedev and had a brief conversation with Putin the next day. The parties discussed key bilateral issues in trade, energy, investments, humanitarian cooperation and others. They also reviewed trilateral economic projects involving Russia, South Korea and North Korea.

Putin and Park also met on the sidelines of the Asia-Pacific Economic Cooperation (APEC) Leaders’ Meeting held in Beijing and the G20 summit in Brisbane, Australia in November 2014. The leaders then held a meeting on September 3, 2015 during official events in Beijing marking the 70th anniversary of the end of the World War II.

On November 30, 2015, the two presidents met on the sidelines of the UN Climate Change Conference in Paris. Both leaders discussed prospects for expanded trade and economic relations and the situation on the Korean peninsula.

Another meeting between Putin and Park took place on September 3, 2016 on the sidelines of the Eastern Economic Forum in Vladivostok. They discussed the current state of bilateral relations and their development prospects. After the talks, a package of documents stipulating cooperation in the industry, healthcare and fisheries sectors was signed in the presence of both heads of state.

On May 12, 2017, the Russian president had a telephone conversation with newly elected South Korean President Moon Jae-in, congratulating him on his election and wishing him success. The two leaders discussed topical issues on the bilateral and international agendas and expressed their mutual interest in further expanding mutually beneficial political, economic and cultural-humanitarian cooperation.

Moscow and Seoul maintain fruitful cooperation between their security councils and governments. On April 28, 2016, Russian Foreign Minister Sergey Lavrov and former South Korean Foreign Minister Yun Byung-se met in Beijing on the sidelines of the Conference on Interaction and Confidence-Building Measures in Asia (CICA).

In June 2016, Yun paid a working visit to Moscow to meet Lavrov and discuss the expansion of bilateral political dialogue, development of trade and economic cooperation, as well as expanded cultural and humanitarian contacts.

On February 18, 2017, Russian and South Korean foreign ministers met on the sidelines of the Munich Security Conference.

According to the Russian Federal Customs Service, Russia-South Korea trade turnover reached $15.14 billion by the end of 2016, with Russian exports and imports totaling $10.03 billion and $5.11 billion respectively. In 2016, South Korea ranked ninth in Russia’s trade turnover.

According to the Republic of Korea Ministry of Trade, Industry and Energy, Russian direct investment volumes in the South Korean economy are totaling $196.26 million.

Examples of successful investment cooperation include the Hyundai Motor car assembly plant in St. Petersburg, a Samsung Electronics home appliances plant in the Kaluga Region, an LG Electronics plant in the town of Ruza in the Moscow Region and a Lotte Group hotel development/shopping mall in Moscow.

Russian-Korean cultural contacts, including those in the area of education, continue to develop steadily. South Korea annually receives about 100 Russian students, lecturers and researchers under various educational programs. Some Korean citizens study in Russia free of charge under federal budget scholarships, while some pay full tuition expenses.

Over the past few years, Russians and Koreans have become more and more interested in their countries’ cultural-historical heritage. On January 1, 2014, Russia and South Korea introduced visa-free travel that helps promote the above-mentioned process.