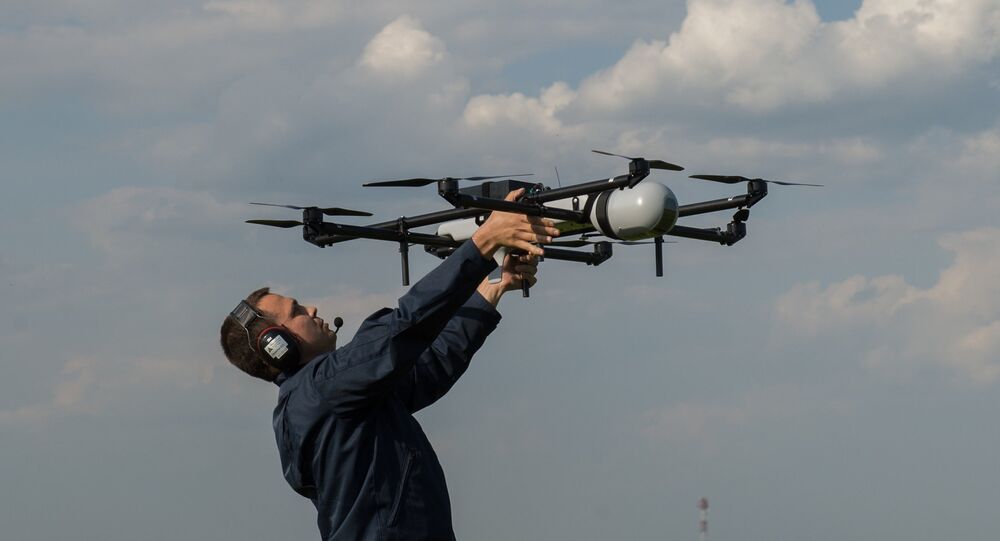 Russia to Catch Up With US, Israel in Drone Creation Soon - Deputy PM

Russian Deputy Prime Minister Dmitry Rogozin in an interview to Sputnik speaks about the Russianprospekts in the sphere of military and intelligence.

"Concerning the UAVs I should only say that there is no point of speaking about some lagging behind. It has been rapidly reduced and will be completely eliminated soon," Rogozin said in an interview.

Rogozin specified that he was speaking about both combat and reconnaissance drones.

A drone, or an unmanned aerial vehicle, is a remote-controlled aircraft without a human pilot aboard. Drones are currently used in policing, firefighting, pipeline checks, as well as for military purposes.

Besides, the Russian industry is ready to create the combat railway-based ballistic missile system code-named "Barguzin" and a 100-tonne ballistic missile if the projects are included in the 2018-2025 state armaments program, Deputy Prime Minister Dmitry Rogozin told Sputnik.

"The industry is at the level of absolute readiness to create in the event that a decision is made and included in the state arms program," Rogozin said.

"In my opinion, in terms of nuclear propulsion systems, everything is in perfect order," Rogozin said.

He pointed to the renewed turbine production at the Kirov-Energomash plant, a subsidiary of St. Petersburg Krovsky Zavod, that facilitates nuclear propulsion manufacturing for civilian and military ships, including nuclear icebreakers and heavy cruisers.

"The effectiveness of our armed forces usage on the basis of defensive sufficiency principle ensures that no aggressor will dare to unleash a war of aggression against our country," Rogozin said.

© Photo : Ministry of Defence of the Russian Federation
Russian Defense Ministry Owns Syria Strikes Footage Putin Showed to Stone
According to Rogozin, some external forces want to push Russia in a "ruinous arms race," but Russia will not be taken in by such provocations, as by the number of military equipment Russia cannot compete with the combined potential of NATO.

Earlier this month, the Politico media outlet reported, citing several congressmen, that the US presidential administration was considering US Congress' proposal to withdraw from the INF Treaty. Russia’s Department for Nonproliferation and Arms Control (DNAC) Deputy Director Vladimir Leontiev said there was a possibility that the United States' withdrawal from the INF Treaty would cause an arms race.

By the way, Russia is capable of responding to any challenge or threat to the country’s security, Russian Deputy Prime Minister Dmitry Rogozin told Sputnik.

"There is no challenge to our security that we would not be able to face – there is none," Rogozin said.

© Sputnik / Mikhail Klimentyev
Putin: US View of Russia as Threat, Geopolitical Rival 'Mistake'
According to the deputy prime minister, the experts are identifying weak areas in the country’s security, which require additional efforts.

"Moreover, I have tasked master designers and managers of technological directions to carefully keep track of all the processes that occur abroad to understand where we are in the coordinate system, which of our solutions match the most advanced solutions, where we are ahead of them, where we have weaknesses and where to focus additional efforts involving fundamental and military applied science," Rogozin said.

In May, the deputy chief of staff of the Russian National Antiterrorism Committee (NAC), Alexei Kovalev, said that the number of terror-related crimes in Russia decreased more than 10 times over the past five years. The most recent terrorist attack took place in the Russian city of St. Petersburg in April, when a metro explosion claimed lives of 16 people including the attacker. As many as 11 people have been arrested as part of the investigation into the incident.

"The year 2019 will already be the beginning of serial production of MC-21-300," Rogozin said, adding that this aircraft is designed for 180-210 passengers.

Additionally, the deputy prime minister explained that politics always interfered with the matters of export orders, with the leading Western manufacturers largely dictating the rules in the aviation market and having an impact on buyers in third world countries through political influence.

"If third world countries want to buy the plane, which will be a sovereign property of those countries, and all of whose on-board electronics will not be disabled via satellite by the Western manufacturers at the wave of a political wand, then, of course, it is better to buy the aircraft, which possesses more profitable technical characteristics and is more interesting for aviation companies … Therefore, I believe that MC-21 is definitely the future," Rogozin said.

The MC-21 is a twin-engine short-and mid-range airliner with a capacity of 150-212 passengers. The presentation of the aircraft took place in June 2016 in the Russian city of Irkutsk. The plane’s maiden flight was on May 28, followed by a series of test flights in June.

"It does not exceed our industry's capabilities in work during peacetime," Rogozin said when asked how much the industry's utilization rates have increased since the Russian air campaign in Syria began two years ago.

"You can go to various exhibitions as much as you like and explain that our weapons are good, but the best criterion for evaluating the effectiveness of our weapons is their combat use, which happened in Syria," Rogozin said.

He added: "The sharp rise in contracts for the purchase of Russian weapons and Russian weapons systems and aviation speaks first of all to the fact that we have equipped the Army and Navy with very good weaponry."

"In fact, the operation in Syria has transferred our aerospace forces into a different, premier military league", Rogozin said.

According to Rogozin, the counterterrorist operation in Syria has fully demonstrated the advantages of the Russian aviation, instantly deployed to a remote theater of military operations.

"The system of service of these aircraft has demonstrated the ability to maintain the air posture of the aviation in the zone of combat operations in good, absolutely operable condition. And accuracy of weapon hits has convinced us that we should increase the orders of these systems, which fully paid off," the deputy prime minister said.

Since September 2015, Russian aerospace forces have been carrying out airstrikes in Syria targeted at terrorist positions. This is being done at the request of Syrian President Bashar Assad. In accordance with a decision made by Russian President Vladimir Putin, the biggest part of the Russian air forces left Syria in May 2016 after its task was successful fulfilled.

© Sputnik / Maxim Blinov
From Su-35 to S-400: Russia to Showcase Over 400 Military Hardware Pieces at Arms Expo in May
As for the situation with the Syrian Su-22 downed by the US-led coalition in Syria, it is a matter of grave violations of the coalition agreements on coordination of actions in the sky, Russian Deputy Prime Minister Dmitry Rogozin told Sputnik.

"I am responsible for the technical side of the issue. From the technical side, we see all that is happening in the Syrian sky. Politically, we draw on the agreements with the coalition on the coordination of our actions in the sky. If these rules are blatantly violated by the US-led coalition, then it is not a question of technical means, but the question of gross violations of the agreements. And this will be discussed in another subspace," Rogozin said commenting the recent incident with the Syrian Su-22 downed by the US-led coalition.

In June, the US-led coalition said it shot down a Syrian Su-22 fighter-bomber south of the city of Tabqah after the Syrian aircraft allegedly attacked the positions of the US-allied Syrian Democratic Forces (SDF). Damascus said the Syrian aircraft was performing tasks against Daesh (banned in Russia).