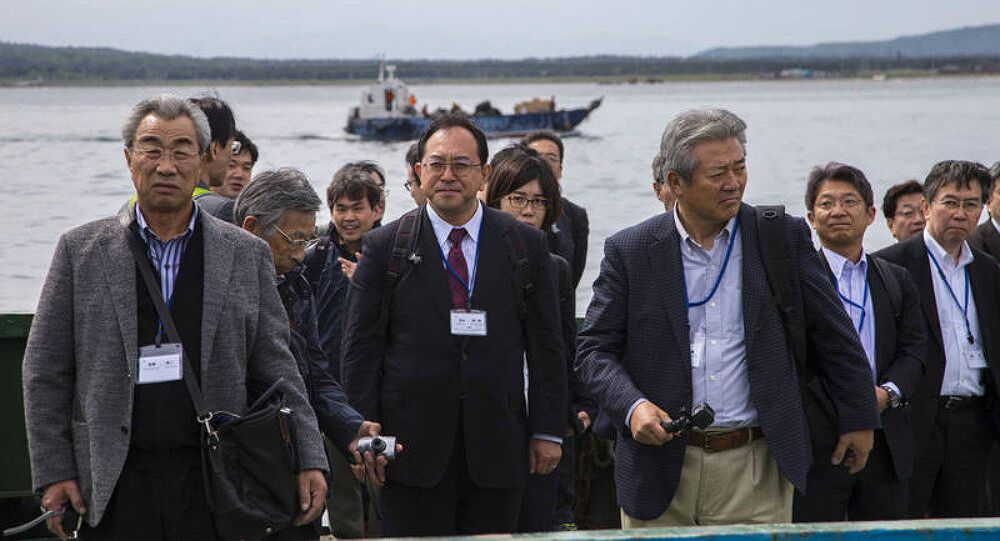 Commenting on the arrival of the first-ever Japanese business mission in Russia's Kuril Islands, Russian political analyst Yury Pochta said that despite the existing disagreements, Moscow and Tokyo continue to develop bilateral social and economic relations.

© Sputnik / Ekaterina Chesnokova
No Consensus on the Horizon: Russia, Japan Still Bickering Over Kuril Islands
The press service of the Sakhalin region's governor said that earlier this week, a business mission from Japan arrived in the Kuril Islands, the first such event in the archipelago's history.

The Japanese delegation includes 69 people, including representatives of 32 private companies, as well as government and municipal structures.

"The group is headed by Eiichi Hasegawa, Special Adviser to the Japanese Prime Minister, and in the next five days the delegation will visit the islands of Kunashir, Iturup and Shikotan," the press service said.

While in the Kurils, the Japanese intend to explore opportunities for bolstering joint economic activity, something that was previously agreed upon by Russian President Vladimir Putin and Japanese Prime Minister Shinzo Abe.

The group is expected to visit facilities that have been recognized as potential sites for the development of joint Russian-Japanese economic activity on the Kuril Islands.

© REUTERS / Issei Kato
Russia-Japan Relations Have Good Prospects if Tokyo Cuts Ties With ‘American Cerberus’
Earlier this year, a group of Japanese experts visited Russia's Sakhalin Region to discuss bilateral projects in the field of agriculture and fisheries, as well as tourism, energy, medicine and the recycling of domestic waste.

Meanwhile, Sakhalin region governor Oleg Kozhemyako touted the visit as a big step in bilateral relations. According to him, local authorities are ready to provide appropriate conditions for developing businesses in the region.

For his part, Eiichi Hasegawa noted that the Japanese deem it "important to find as many points of contact with the Russian side in the Kurils as possible."

He said that the inspection of the facilities will allow the Japanese to determine the most promising directions for bilateral cooperation and developing specific projects.

Speaking to Sputnik, Russian political analyst Yury Pochta pointed to the fact that Moscow and Tokyo continue to bolster social and economic ties in the face of differences over issues related to the bilateral post-WWII peace treaty.

He recalled that "Russia and Japan have recently been trying to normalize bilateral relations tarnished by the legacy of the Second World War."

"Negotiations continue, but the Japanese maintain high expectations that Russia is ready to give part of the Kuril Islands in exchange for Tokyo's promises of economic cooperation with Moscow," he said.

Pochta added that "the Japanese still react angrily to any trips of Russian officials to the Kuril Islands, which is why a certain tension persists."

He also said that "Russia has repeatedly called for establishing economic cooperation on the use of these islands because they are poorly developed." On the other hand, Russia continues to strengthen the defense capacity of this region, according to him.

"Russia clearly sticks to its position, which stipulates that no compromises on the territorial issue should be given. But as for the development of socio-economic relations between Russian and Japan, let's be friends. I think that this is a fairly successful tactic," Pochta concluded.

Russian-Japanese relations have long been complicated by the fact that the two nations have never signed a permanent peace treaty after World War II ended.

© Sputnik / Ekaterina Chesnokova
Russia Champions a 'Pioneering' Solution by Promoting Cooperation With Japan Over Kurils
This was due to a disagreement over a group of islands, which Russia calls the Southern Kurils and Japan refers to as the Northern Territories, which consist of four territories: Iturup, Kunashir, Shikotan and Habomai.

The revitalization of relations between Moscow and Tokyo started when Prime Minister Shinzo Abe met with Russian President Vladimir Putin and presented an eight-point bilateral economic plan during his landmark visit to Sochi, Russia in May 2016.

The plan covers such areas as oil and gas development, and the modernization of ports and airports in the Russian Far East. In September, Abe participated in the 2016 Eastern Economic Forum in the Russian port city of Vladivostok.