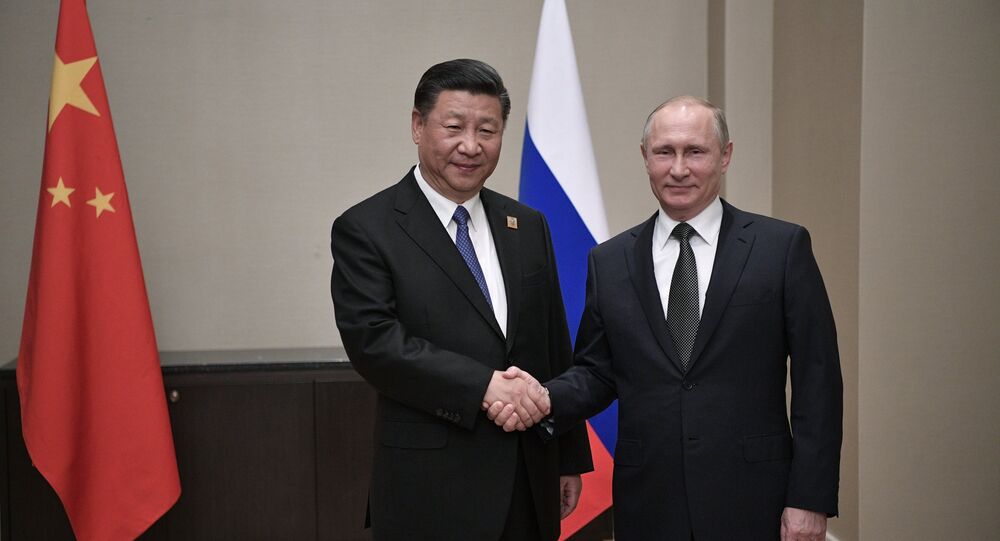 Western sanctions and counter-sanctions from Russia gave an unexpected lift to the Russian agricultural sector, which lead to an opportunity for a major breakthrough in in export of Russian pork to China, according to experts.

MOSCOW (Sputnik), Tommy Yang — Russia’s agricultural industry is expected to make a major breakthrough after Russian President Vladimir Putin meets with Chinese President Xi Jinping, who will be in Moscow for an official visit next week, as the nation’s meat producers could finally be allowed to export their products to the Chinese market, experts told Sputnik.

Western sanctions and counter-sanctions from Russia gave an unexpected lift to the Russian agricultural sector, especially meat producers, as Russian authorities invested billions of dollars in boost domestic food production to compensate the void left by the ban on food imports from Europe.

© Sputnik / Mikhail Klimentyev
Putin Says Sanctions Led Russia to Self-Sufficiency in Pork, Poultry
Now, Russian meat producers are eyeing for a stake in the lucrative market in China, the world’s largest pork consumer. Major regulatory hurdles, such as veterinary inspection requirements, are expected to be lifted during the upcoming official visit of the Chinese president, paving the way for the long-awaited access to the Chinese market.

Negotiations between top Russian meat producers, including Miratorg and Rusagro, and their Chinese counterparts started about two years ago, initiated by the Russia’s Ministry of Economic Development, experts involved in the negotiations told Sputnik.

"Both parties have reached an understanding of what the other side needs. Basically, all the documents are pretty much ready, just waiting to be made official during the meeting between Putin and Xi," Oleg Remyga, head of the China Studies Lab at the Skolkovo Moscow School of Management, told Sputnik.

According to Remyga, both Miratorg and Rusagro have invested in meat production facilities in Russia’s Far East regions, close to the border with China, in recent years, in preparation for exports to the Chinese market.

© Sputnik / Vitaliy Timkiv
Russian Agriculture Exports to China to Total 52 Mln Tonnes by 2028
Russian Deputy Minister of Economic Development Alexey Gruzdev said earlier this week that Putin and Xi would probably discuss agricultural cooperation as one of the new directions during their meeting in Moscow.

Meat production experienced explosive growth in recent years as the Russian government pursued an ambitious goal of high levels of self-sufficiency in food production, targeting 85 percent of self-sufficiency in meat and poultry by 2020. Official figures from Russia’s Ministry of Agriculture showed that in the first six months of this year Russian meat imports fell by almost 5 percent, while meat exports grew by 20 percent compared to the same period of the previous year.

Russia’s National Union for Pork Producers (NSS) said pork production in the country rose 9.9 percent from the previous year to 3.39 million tonnes in 2016. According to figures from the NSS, top Russian pork producers such as Miratorg and Rusagro almost tripled their production volume from 2011 to 2015.

© Sputnik / Vitaliy Timkiv
China Puts Stake on Investments in Russian Agriculture Sector
However, Remyga, the expert at the Skolkovo Moscow School of Management, warned that due to the low profitability of agricultural products, any change in market conditions or business terms could have a significant impact on Russian exports.

"When Russian companies tried to export wheat to China, their Chinese customers said wheat could only be imported from Russia in a special type of bag, which incurred additional cost. It took the Russian Ministry of Agriculture 3-4 months to try to negotiate and resolve this issue," he said.

During a briefing this week regarding to the Chinese President’s upcoming visit to Russia, Wang Shouwen, the vice minister of China’s Ministry of Commerce, expected the trade turnover between the two countries to top $80 billion this year. According to official figures, the Russian-Chinese trade jumped 26.1 percent in the first five months of this year to $32.39 billion. Bilateral trade stood at $69.5 billion in 2016, up by 2.2 percent from the previous year.

In addition to the increase in trade volume, the structure of Russian exports to China has also been improving, Remyga noted.

"The share of oil and gas in Russian exports to China continued to fall, as agricultural products started to substitute their roles," he said.

"Pork used to account for over 90 percent of meat consumption in China, falling to about 65 percent in recent years, as growing income allowed Chinese citizens to diversify their choice of meat," Feng Yonghui, chief analyst at the pork industry consultancy Soozhu.com, told Sputnik.

Feng expects pork’s dominance in China to continue in the next 20-30 years as Chinese cuisine evolved around pork over the centuries.

"Pork’s superior position on the Chinese dining tables accumulated over thousands of years. It’s hard to be shaken. If you open the menu in a Chinese restaurant, over 50-60 percent of the dishes are made of pork," he said.

As domestic production struggled to meet pork consumption in China in recent years, Beijing started to lift restrictions on imports and allow pork to be imported from more and more countries. Official figures from the Chinese customs showed that the nation imported about 1.6 million tonnes of pork in 2016, up 108.4 percent from the previous year, at the value of about $3 billion.

© REUTERS / Kim Kyung-Hoon
China Hopes to Increase Agricultural Exports to Russia - Chinese Ambassador
The Beijing-based industry analyst believes Russian pork has a good chance in the Chinese market, especially for byproducts of pork such as pig head and pig feet.

"Pork byproducts such as pig head and pig feet are usually thrown away as trash or used as animal feeders in other countries, while they’re favorable delicacies for Chinese consumers. Stewed pig feet is supposed to help you maintain your beautiful skin," Feng said, adding that about half of China’s pork imports were byproducts including pig head, pig feet or pig intestines.

Feng suggested that lower prices are still the key for pork products from Russia to stay competitive in the Chinese market.

"China’s pork imports more than doubled last year because prices in the domestic market hit a record high of about $3 per kilogram. Imports slowed in the first few months of this year, as prices fell to about $2 per kilogram. Cheaper prices were still the main reason Chinese companies wanted to import pork from overseas," he said.

Feng pointed out that outbreaks of African swine fever in Russia last year could concern Chinese authorities in charge of food safety and certification, noting that China banned pork imports from 14 pork plants and warehouse in the United States over the use of ractopamine, a prohibited feed additive.