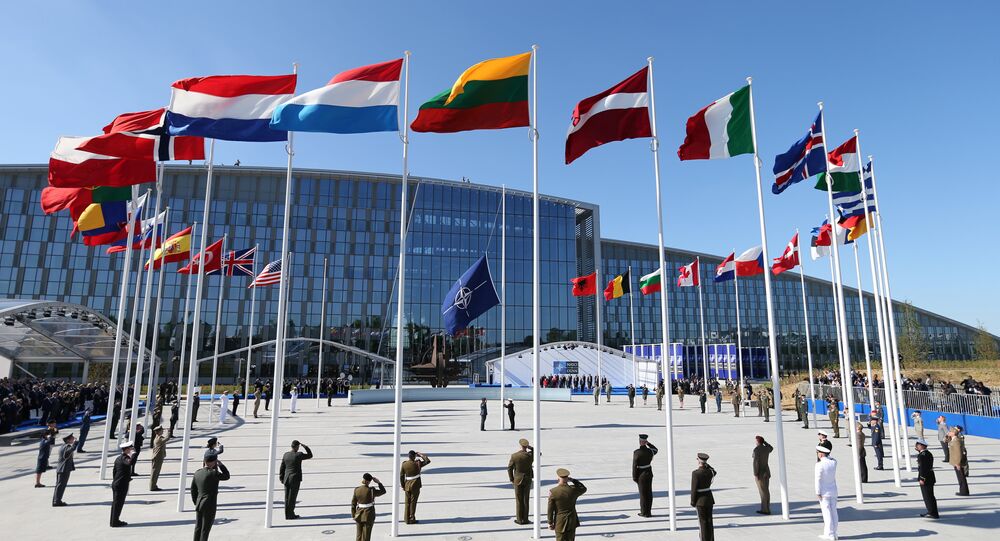 From Cyberspace to Nuclear Deterrence: How NATO Will Boost Its Combat Potential

During a meeting in Brussels earlier this week, NATO's defense ministers specifically agreed on strengthening the defense potential of the alliance and discussed the future of a NATO mission in Afghanistan.

© REUTERS / Ints Kalnins
Peace on the Horizon? NATO Statements on Russia Indicate 'New Tendency'
On Thursday, the defense ministers of NATO countries agreed on new goals to strengthen the alliance's combat potential pertaining to a number of key areas, including heavy equipment, air refueling and an increase in the number of forces ready for rapid deployment.

The meeting was held a month after a NATO summit where participants made new decisions on the growth of the alliance's defense spending, in line with their previous obligations and US demands.

From Cyber Defense to Nuclear Deterrence

According to NATO chief Jens Stoltenberg, the new objectives are also related to training the existing NATO military units and the creation of additional ground, maritime and cyber forces.

US Defense Secretary James Mattis told reporters that these plans pertain to "everything, from cyberspace to nuclear deterrence."

Stoltenberg, in turn, noted that this includes, among other things, the strengthening of the alliance's air defense capabilities, such as naval air defense systems and the development of NATO's air force with the help of aircraft that will be capable of operating under the conditions of an access restriction system (A2/AD).

NATO's plans to boost its defense capability came amid new data on the growth of the alliance's defense spending.

United States spending accounts for $683.4 billion of this sum, while the contribution of other members of the alliance will increase at their fastest pace in at least eight years.

A Contingent in Afghanistan: Waiting for Promises

Also high on the agenda of the Thursday gathering was the future of NATO's Resolute Support mission in Afghanistan.

Speaking to reporters after the meeting, Stoltenberg said that the NATO presence in Afghanistan will be in place after 2017 and that the NATO contingent there will be strengthened. However, the alliance has yet to clarify the exact number of troops it will deploy to Afghanistan.

Sources said that about 4,000 additional NATO servicemen may be deployed to Afghanistan in the future.

"Today I can confirm that we will increase our presence in Afghanistan. Fifteen nations have already pledged additional contributions to the Resolute Support mission. And I look forward to further announcements from other nations," Stoltenberg told reporters before a NATO defense ministers' meeting at the Alliance headquarters in Brussels.

NATO is waiting for the decision of the United States, which has yet to determine its strategic goals in the region. According to Mattis, the ministerial meeting in Brussels will allow Washington to move forward in this regard. Right now, the 13,500-strong NATO contingent in Afghanistan includes 6,900 US soldiers.

On Wednesday, Stoltenberg said that NATO was not planning to resume combat operations in Afghanistan, but was determined to enhance training and assist Afghan forces.

He added that NATO does not consider the decision to stop the alliance's mission in Afghanistan in 2014 a mistake.

"The decision on the completion of the NATO military operation [there] and transition to the training mission was not wrong," Stoltenberg told journalists. He noted that "it is better to allow local armed forces to stabilize the country than for their work to be done by NATO forces."

© REUTERS / Ints Kalnins
With Friends Like These: NATO Hummer Crashes Into Civilian Car in Lithuania
For his part, the Pentagon chief acknowledged that the withdrawal of US troops from Afghanistan was handled too quickly.

"Looking back on it, it's pretty much a consensus that we may have pulled our troops out too rapidly, reduced the numbers a little too rapidly," Mattis said.

Commenting on Mattis' statement, Afghan Acting Defense Minister Tariq Shah Bahrami noted that "the international community could not leave its forces in Afghanistan for too long."