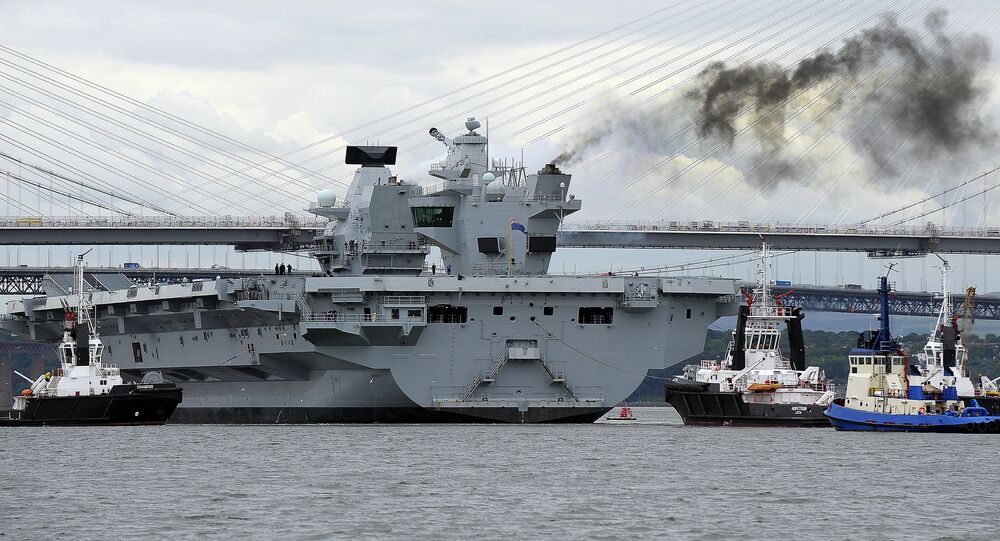 The British Defense Secretary's comments that Moscow will look with "envy" on Britain's new aircraft carrier prompted a retort from Russian Defense Ministry spokesman Igor Konashenkov, who described the HMS Queen Elizabeth is nothing but a "convenient sea target."

© Sputnik / Press service of the Northern Fleet/Andrey Luzik
Admiral Kuznetsov's Mission in Syria 'Dispels Doubts Over Russia's Naval Capabilities'
The HMS Queen Elizabeth, a 280-meter (919-foot), 65,000-ton aircraft carrier, left the Scottish port of Rosyth in the early hours of Tuesday to conduct sea trials for a week in the North Sea.

Named after Queen Elizabeth I, the aircraft carrier, which is worth £3.0 billion ($3.8 billion), is touted as the largest ship in the history of the British naval forces. It took eight years to build the vessel.

In an interview with the Telegraph, British Defense Secretary Michael Fallon heaped praise on the Queen Elizabeth and tried to make fun of the Russian aircraft carrier Admiral Kuznetsov.

Commenting on this, Russian Defense Ministry spokesman Igor Konashenkov in turn said that "the British Defense Chief Michael Fallon's statement regarding the superiority of the new UK aircraft carrier over the Russian aircraft carrying cruiser Admiral Kuznetsov in terms of external beauty exposes his utter ignorance of naval science."

Fantastic photo taken by Su-30SMs while they are flying above the #RussianNavy aircraft carrier Admiral Kuznetsov during Syrian campaign. pic.twitter.com/QWLfDqRBrz

"In contrast, the Admiral Kuznetsov is armed with air defense and anti-submarine weapons, as well as with anti-ship Granit missiles," he explained.

"For that reason, it is in the interests of the British royal navy not to show off the 'beauty' of its aircraft carrier on the high seas any closer than a few hundred miles from its Russian 'distant relative'," Konashenkov added.

He was echoed by Russian military expert Oleg Ponomarenko, who urged the British Defense Secretary to focus on warships' combat capabilities rather than the beauty of their exteriors.

"Our aircraft carrier is a more independent vessel and is much better protected if, for some reason, the escort ships are unable to reach their tasks," he said referring to 200 missiles on board the Admiral Kuznetsov and 200 more short-range missiles at the Kortik anti-aircraft system.

"It is a very serious weapon. The Queen Elizabeth is also equipped with similar systems but its stock of missiles is insignificant. This British ship is only designed for local conflicts," Ponomarenko said.

© AP Photo / Russell Cheyne
Lead UK Aircraft Carrier HMS Queen Elizabeth's Use of Outdated Windows Could Backfire, Get It Hacked
Traditionally the Russian navy has relied on submarine warfare rather than carrier groups to project naval power. The Queen Elizabeth has a sister ship, the Prince of Wales, which is expected to enter active service in 2020.

Meanwhile, fears have been raised that Britain's largest=ever warship could be vulnerable to cyberattacks. The Queen Elizabeth set out for sea trials amid concerns about it using an outdated Microsoft Windows XP operating system.