MOSCOW (Sputnik) — Russia has always been ready to cooperate with the United Kingdom and the West in countering terrorism in the regions of its origin and in the targeted countries, Konstantin Kosachev, the chair of the Russian upper house of parliament's foreign affairs committee said Sunday.

"Russia has been ready from the beginning and maintains its readiness to cooperate with the United Kingdom and the West against this common threat. There, where it comes from, and here in our countries. How many tragedies should take place until our potential allies in countering terrorism change their minds? Or rather world perception?," Kosachev said on Facebook.

© REUTERS / Hannah McKay
London Bridge and Borough Market Terror Attack: What is Known So Far
The lawmaker expressed his condolences to the victims of the deadly incident in London.

On Saturday, at 10:08 p.m. local time (21:08 GMT), a vehicle had struck pedestrians on London Bridge. The vehicle with three suspects continued to drive from London Bridge to Borough Market, after which the suspects left the vehicle and carried out a stabbing attack at the market. The attackers were confronted by the police and shot dead within minutes.

"A comprehensive program of action to combat international terrorism was proposed by Russian President Vladimir Putin at the UN General Assembly summit in September 2015. [Its essence lies] in creating a broad international anti-terrorist coalition that could rally different forces on the basis of common values and international law, guided by the principles of the UN Charter," he said speaking at the International Institute for Strategic Studies (IISS) Shangri-La Dialogue Asia Security Summit in Singapore. 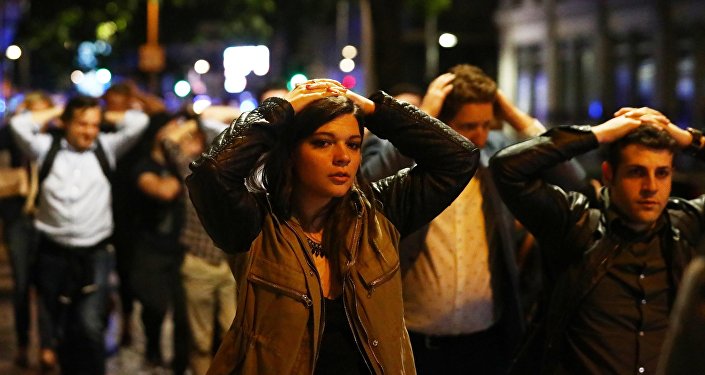 © REUTERS / Neil Hall
Torries Suspend National Campaigning Amid Terrorist Attacks in London
The official added that Moscow advocated the expansion of international cooperation in the fight against terrorism in the framework of Shanghai Cooperation Organization, ASEAN Regional Forum and ASEAN Defence Ministers' Meeting (ADMM), stressing that Russia viewed ASEAN member states as strategic partners in such fields as regional security and stability.

The Association of Southeast Asian Nations (ASEAN) was established in 1967 and currently comprises 10 southeast Asian states. The relations between Russia and the bloc date back to 1991 and have been developing under various ASEAN partnership mechanisms since then.

The IISS Shangri-La Dialogue is a foreign affairs and defense forum attended by leaders from around the Asia-Pacific region and held annually since 2002 in Singapore.