The United States is pulling out from the Paris Climate Agreement signed by 195 nations, President Donald Trump announced Thursday. 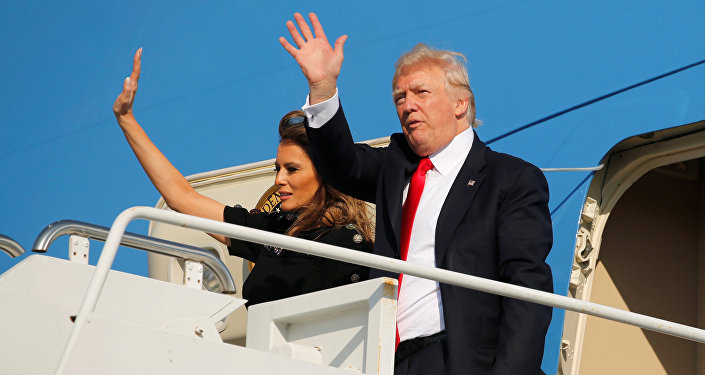 © REUTERS / Jonathan Ernst
'We're Getting Out': Trump Yanks US From Paris Climate Deal
"The United States will withdraw from the Paris climate accord," Trump said in a speech in the White House Rose Garden.

He said that the 2015 landmark deal is too costly for US companies and unfair because it results in a "massive redistribution" of American wealth to poorer countries.

"I was elected to represent the citizens of Pittsburgh, not Paris," Trump said.

The US will cease "all implementation" of the "non-binding accord" and "draconian" burdens it imposes," the President stated, adding that Washington will seek a "better deal".

The Paris climate deal, established within the UN Framework Convention on Climate Change and championed by former US President Barack Obama, was signed in 2015 by 195 countries and ratified by 148 states. The agreement aims at keeping the increase in average global temperature at below two degrees Celsius above pre-industrial levels by reducing greenhouse gas emissions.

© REUTERS / Dylan Martinez
Trump Paris Accord Exit Abdicates US Global Leadership on Science - Ex-Envoy
Washington’s withdrawal from the deal could become an "anti-stimulus" for other countries in reducing carbon emissions, according to Gerardo Honty, an expert at the Latin-American Center for Social Ecology.

At the same time, he suggested that Trump’s decisions will not have serious consequences for the legal part of the deal.

"In legal terms, their pullout from the agreement is not a big deal. The same happened to the Kyoto Protocol after the US refused to ratify it. The agreement remains in force," Honty told Sputnik Mundo.

The Kyoto Protocol was not ratified by the US due to opposition from the administration of then-President George W. Bush. He said that the deal "would cause serious harm to the US economy." As of June 2017, the US is the only signatory that has not ratified the Protocol.

© REUTERS / Osservatore Romano
Vatican Outraged Over US Exit From Paris Climate Deal, Calls it 'Slap in the Face'
Honty assumed that the situation in the global market will not be determined by Washington’s decision to pull out from the deal. In fact, it will depend on a decrease or increase in greenhouse gases emissions by American companies.

According to Honty, there are major players in the American market that push for developing renewable energy.

"If those companies succeed in their activities greenhouse gases emissions by US companies will decrease, regardless of who stays in the deal," he pointed out.

"The Paris Agreement itself is weak. Despite all the pledges, average global temperature remains two degrees above [pre-industrial levels]. What could really help are changes to domestic policy of other countries on the matter," Honty said.

According to the expert, "climate change is real" and this is a fact based on scientific research.

"The majority of scientists and specialists say that it is real. Siding with the minority means greater risks. Research data proves that without human activities average global temperature would be 1.5-2 percent below the current level. The opposite argument is used by conservative forces that want to preserve and justify the current model of production and consumption," Honty concluded.

Russia Plans to Ratify Paris Accord by 2020 - Environment Minister