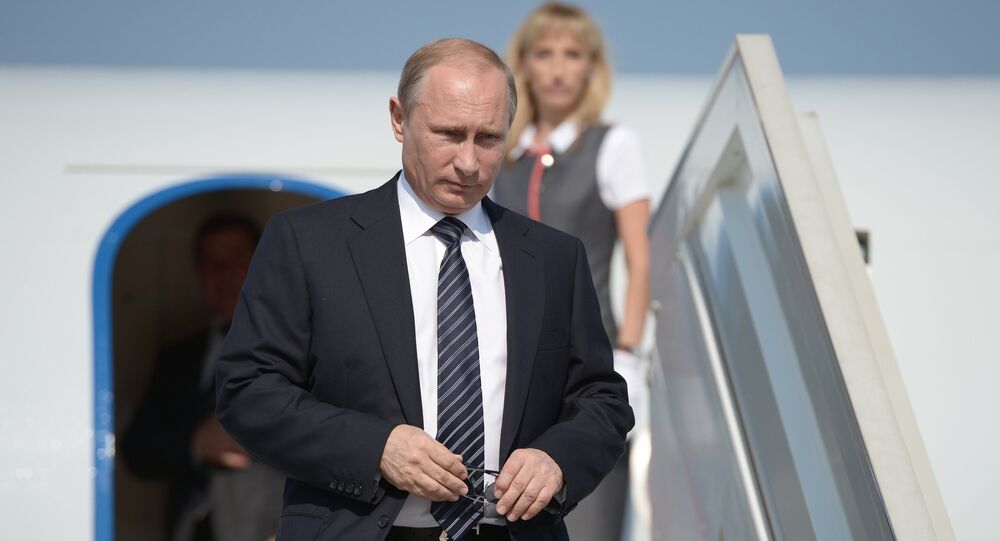 Syria and Ukraine are expected to be high on the agenda of Monday's talks in Paris between Russian President Vladimir Putin and French counterpart Emmanuel Macron; experts say that the talks will unlikely lead to a breakthrough in bilateral ties tarnished under former French President Francois Hollande.

© Sputnik / Irina Kalashnikova
French Presidential Hopeful Macron Pledges: I Can Manage to Get Putin's Respect
On Monday, Russian President Vladimir Putin will sit down with his French counterpart Emmanuel Macron in Versailles for talks that are expected to focus on a number of pressing issues related to Syria and Ukraine.

In an interview with RT, Russian expert on France Alexander Vershinin said that the fact that the negotiation will be held in Versailles "indicates Paris' desire to smooth out the unpleasant impression" of former French President Francois Hollande expressing doubt about the feasibility of his meeting with Putin in October 2016.

"No one expected Macron to start mending ties with Russia so quickly. Today we see an obvious attempt to set back the clock and resolve the contradictions between Russia and France through direct contact. Russia is ready to start developing bilateral ties from scratch. Another question is whether this can be done, given that the contradictions are very deep," Vershinin said.

He added that "Paris is no longer the capital where these contradictions can be resolved" and that "Macron would rather act as an intermediary between Russia and the United States."

Notably, the new French President shares the view of his predecessor on the Ukrainian crisis, which is why it is still unclear how Paris intends to link its push for dialogue with Moscow with its position on Ukraine, according to experts.

"First and foremost, Macron is a pragmatic economist who can count money. However, he is inexperienced in foreign policy issues, and besides, he cannot act independently, because France is built into the front of Western countries, where it does not play the first fiddle," Vershinin said.

© REUTERS / Regis Duvignau
False Flag en Francais: CIA 'May Have Hacked Macron to Stop Russian-French Rapprochement'
Yevgeny Osipov, a senior fellow at the Institute of World History of the Russian Academy of Sciences, for his part, told RT that he didn't expect any breakthrough solutions during the talks between Vladimir Putin and Emmanuel Macron.

"The two leaders will discuss a full range of bilateral issues, including economic cooperation. But as long as the regime of mutual sanctions remains, any breakthroughs cannot be expected, especially given that Macron is still in favor of extending the restrictive measures," according to Osipov.

"The most important thing is the very fact of this [Putin's] visit, especially after last autumn's scandal, which broke out due to Hollande's stance. The Putin-Macron talks are due to improve the climate in relations between the two countries," he said.

He also described the Versailles meeting as "a step which is now capable of laying the groundwork for the future rapprochement" between Russia and the EU on the whole.

#Putin, #Macron to meet in Versailles on 300th anniversary of Tsar Peter’s visit to France https://t.co/cCez2AEB7k

In an interview with the Russian online newspaper Vzglyad, Alexey Pushkov, head of the Russian Upper House's Information Policy Committee, said that "the French President inviting the Russian leader to Paris indicates the EU's final refusal to try to isolate Russia."

Russian political analyst Kirill Koktysh, in turn, told Vzglyad that in line with pragmatic considerations, Macron's policies cannot be a mere "continuation" of those implemented by his extremely unpopular predecessor Francois Hollande, who was ultimately responsible the impasse that came to characterize Moscow's relationship with Paris.

"Under Hollande, Russian-French relations deteriorated significantly. Improvements can easily be achieved — it is enough to at least partially restore what has been destroyed," Koktysh said.

According to him, "from the first meeting between Putin and Macron we should not expect anything other than [for them] to establish personal relations and work out a space for the dialogue that can be established between Russia and France."

"During the Versailles talks, Macron will try to test the statements that were announced at the recent G7 summit and get a Russian response to these statements. In any case, it is unlikely that Macron received any mandate for bargaining during the talks," Koktysh concluded.

For his part, Russian Upper House member Andrey Klimov told Vzglyad that bearing in mind one of the most acute problems in France, the problem of illegal migration, fueled by conflicts in the Middle East, Macron cannot but conclude that the Syrian issue cannot be resolved without interaction with Russia.

"Therefore, it is not surprising that it was Syria that was named the main topic of the meeting between Macron and Putin," Klimov said.

Last week, Kremlin spokesman Dmitry Peskov said that the agenda of the talks would be wide-ranging. He noted that it would include bilateral cooperation, the coordination of efforts in the fight against terrorism and the settlement of the ongoing crises in Syria and Ukraine.

© REUTERS / Stephane De Sakutin/Pool
Russia 'Hopes for Fruitful Dialogue and Cooperation' With Macron's France
According to Peskov, during their first meeting, Putin and Macron will get acquainted and exchange views on the key problems and issues, including regional conflicts.

"You know, the agenda is, in fact, obvious. First, the two presidents should get acquainted; this will be their first meeting. Second, Russia and France have a very extensive agenda of bilateral relations: these are trade and economic cooperation projects, cultural interaction, and so on and so forth," Peskov said.