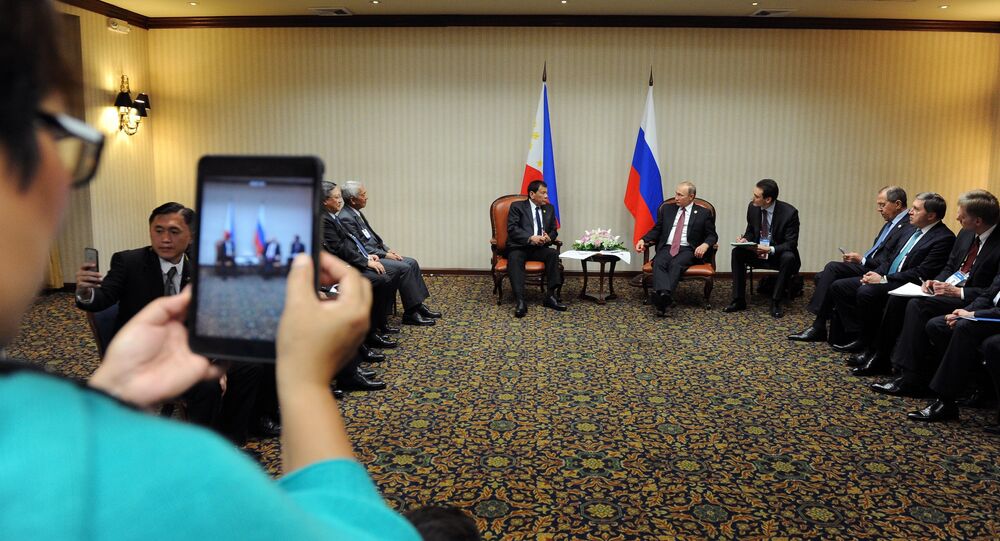 Philippine President Rodrigo Duterte arrives in Moscow on May 22 to sit down with Russian President Vladimir Putin. The two leaders are expected to discuss ways of expanding bilateral political, economic and military cooperation.

Apart from high-level talks with Russian President Vladimir Putin scheduled for May 25, Duterte is also expected to speak at the Moscow State Institute of International Relations, Russia's top university for future diplomats, and meet with representatives of the Philippine diaspora in Russia.

In an interview with RT, Duterte said that the main goal of his visit is try to establish "good business relations Russia."

"I have nothing against America…, but my foreign policy has shifted. I want to deal with China and Russia. Because in the Western world, it's double talk," he pointed out.

In early May, Duterte said that he might turn down US President Trump's invitation to visit the White House, because he was "tied up" with a busy schedule.

The U-Turn of "the Unsinkable Aircraft Carrier"

Described as the "unsinkable (US) aircraft carrier," the Philippines was ceded to the United States in 1898 by Spain following over 300 years of Spanish colonial rule, and Washington's new suzerainty was guaranteed by a violent three-year conflict in which the archipelago failed to achieve independence.

In 1946, the Philippines formally became independent following a brief period of Japanese rule during WWII, but Washington still retains its military presence there.

After Duterte came to power in the Philippines in July 2016, the situation related to Manila's foreign policy changed significantly.

Speaking to RT, Russian expert Yelena Fomicheva said that "America has always seen the Philippines as its long-standing ally, but it turned out that certain changes are taking place."

According to her, the policy pursued by the new Philippine President, who signaled a readiness to reduce the influence of the United States and strengthen cooperation with Russia and China, is in line with the strategy chosen by other countries in the region.

In an interview with RT, Professor Larisa Yefimova of the Moscow State Institute of International Relations described Duterte as a person who does not belong to the traditional elite, "educated in the American or pro-American spirit."

"He is a person who took on the mission to make the Philippines an independent sovereign state," she said, adding that Duterte needs Russia's support in order to implement the strategy of reducing US clout in the Philippines.

Pres. #Duterte is scheduled to depart Davao on May 22 afternoon for an official visit to Russia upon the invitation of Russian Pres. Putin. pic.twitter.com/5VRYeKwccU

"Russia is seen by Manila as the largest international player, whose stance is heeded all across the world. Dutherte's visit to Moscow will serve as a signal to other international actors that the Philippines has a large-scale and diverse range of opportunities in the global arena," she said.

She added that "Duterte is not going to be a puppet of the US, China or Russia" and that "he needs the Philippines independent, which is why he will seek to build friendly relations with these three countries."

Russian political analyst Dmitry Mosyakov, for his part, told RT that the key priorities of Duterte's foreign policy include developing friendly ties with China and with Russia while maintaining relations with the United States, while at the same time Manila will seek to decrease its dependence on the United States.

According to Philippine media, during Duterte's visit to Moscow the sides are expected to sign an agreement on bilateral defense cooperation.

Experts recalled in this regard that earlier this year, the Philippine Minister of Defense signaled Manila's readiness to purchase Russian military aircraft and small arms, as well as armored vehicles, helicopters and submarines.

The Philippines is seeking to boost defense and security cooperation with Russia during President #Duterte visit to Moscow Russia this week. pic.twitter.com/Zg0r36qPsh

Yeleba Fomicheva in turn said that the Philippines' move to buy Russian weapons will be not a one-day process and that it is only natural that Manila is turning to Russia as an alternative to the US and China, despite these two Pacific rim powers also manufacturing high-quality weapons.

Apart from the defense cooperation deal, the sides are also due to ink a spate of treaties on mutual legal assistance, trade and investment, as well as on the peaceful use of atomic energy.

"The Philippines has a number of tropical products that may be of interest to Russia, and on the other hand, they have embarked on the development of industry and high technologies," Larisa Efimova told RT.

As for Russia, it can supply fertilizers, machinery and equipment to the Philippines, according to her.

© AFP 2019 / TED ALJIBE
'You Must Be Kidding': Duterte Won't Allow US to Treat Philippines as Colony
"The prospect of developing mutually beneficial trade is very good," she said, noting that the Philippines can become a significant market for Russian goods.

The 2016 trade turnover between Russia and the Philippines only totaled 226 million dollars. In this vein, the Philippine delegation will certainly try to improve the situation during Duterte's current visit to Russia, given that Russia's annual trade turnover with nearby Vietnam amounts to billions of dollars.

According to Dmitry Mosyakov, Duterte's visit to Moscow reflects the success of the Russian strategy on turning to the East which specifically stipulates "expanding full-fledged ties with the countries of Southeast Asia."

"We should understand that we are only taking the first steps and we are entering markets where we have never been before," which is why he said one should not overestimate Dutherte's current visit to Russia.