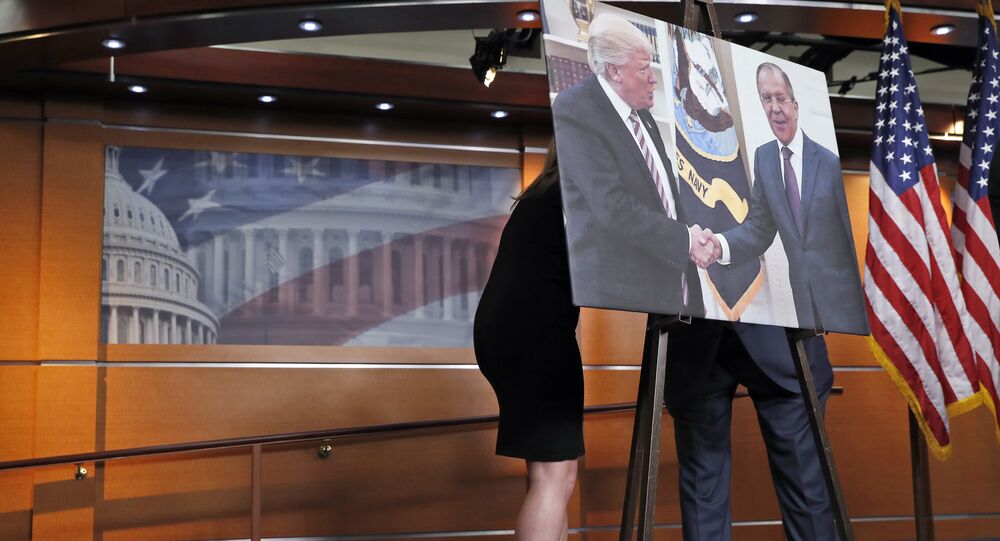 In an interview with Sputnik, Russian political analyst Grigory Dobromelov heaped praise on President Vladimir Putin's recent statement about Russia's readiness to provide US Congress with a transcript of the Trump-Lavrov Talks.

"If the US administration considers it appropriate, we are ready to provide the US Senate and Congress with the transcript of the talks between Lavrov and Trump," Puitn said.

He added that it could happen only "if the US Administration wants it, of course."

McMaster on Trump talk with Russian officials: He feels "hamstrung in his ability to work with Russia" https://t.co/2VPOZAeech pic.twitter.com/9pLlQwno8W

Putin's statement came after the Washington Post reported that Trump allegedly told Lavrov and Russia's Ambassador to the United States Sergey Kislyak information about a terror threat involving laptops on airplanes. The information reportedly came from a US partner through an intelligence-sharing agreement.

Speaking to Sputnik, Russian political analyst Grigory Dobromelov said that similar scandals "indicate the American establishment's inability to cope with the political rift that arose right after the election of President Donald Trump."

"The very fact that all this was commented upon by the head of another state reveals the depth of the contradictions that are now in place between different groups of the US political elite. First and foremost, it reflects the level of distrust among Trump's opponents in his team," Dobromelov said.

He praised Russia's "non-standard yet meticulously adjusted" reaction to "this rather non-standard development of the situation."

"It's absolutely clear that the US media could have asked the Trump Administration to give this information," Dobromelov said, referring to the US media's main task "to discredit Trump and his attempts to build a constructive dialogue with Russia."

"That's why Russia is also ready to take unprecedented steps in terms of transparency, right down to providing [confidential] information that would have never been published under any other circumstances," he concluded.

Trump met Russian Foreign Minister Sergei Lavrov and Russian Ambassador to the US Sergey Kislyak on May 10.

© Photo : RUSSIAN FOREIGN MINISTRY
What's Behind Bogus Story About Trump Sharing Sensitive Intel Data With Russia
Denying the claims about his giving secret information to Russian officials, the US President at the same time said that he had "an absolute right" to share facts regardin terrorism and air flight safety with Russians.

Earlier, US Secretary of State Rex Tillerson said that the claims are false, and that Trump, in a meeting with Lavrov and Kislyak, had discussed a wide range of issues related to counterterrorism, but had not mentioned sources, methods or military operations.

What is 'Obstruction of Justice'? Special Counsel Takes Over Trump-Russia Probe