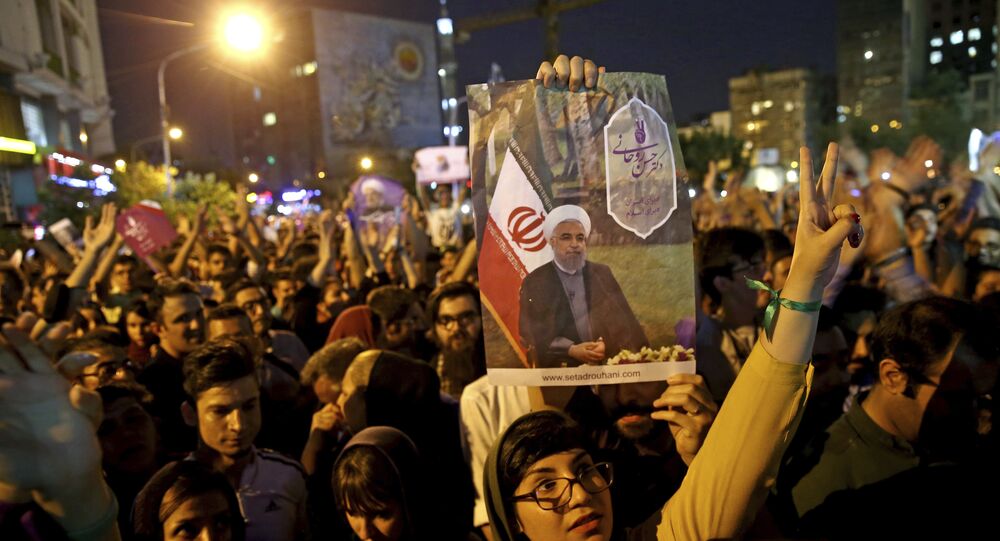 'Real Issue': Iran's 'Deep State' Up in Arms Against 'Any Rapprochement With US'

In an interview with Sputnik, Sina Azodi, a US-based expert on Tehran's foreign policy and US-Iranian relations, specifically focused on the outcome of this week's presidential elections in Iran.

According to the final results, Rouhani gained 57 percent of the votes, allowing him to declare victory without the necessity of proceeding to a run-off election between the top two candidates.

His main rival — a hardline cleric and former prosecutor Ebrahim Raisi – came in second with around 38 percent.

The turnout in the Friday presidential election reached 73 percent, as more than 40 million Iranians cast their ballots.

Iran’s President Hassan Rouhani Re-elected. If the nuclear issue can solved,the US should push for better relations. https://t.co/85J9eCpF3R

68-year old Rouhani was first elected Iran's president in June 2013, with 18 million citizens casting their ballots for him. He took office promising to open Iran to the world and managed to negotiate a watershed nuclear deal with the world powers in 2015.

Speaking to Sputnik, Sina Azodi, a US-based expert on Tehran's foreign policy and US-Iranian relations, gave his thoughts on the May 19 presidential elections in Iran, which he said ended with a "predictable" result.

Touching upon Iran's domestic affairs, Azodi said that Rouhani "has another four years" to resolve a bevy of social issues and that although "he has done a lot, it's not enough."

"He has been able to reduce inflation but at the price of high unemployment and low national production. So he needs to work on both of these and actually tell people that 'this is what I've done and this is what can be done as the result of the nuclear deal'," Azodi added.

When asked about the future of Iran-US relations in light of Rouhani's re-election, Azodi specifically pointed to the Iranian President's readiness to sit down with Washington.

"But the real issue is Iran's [so-called] 'deep state' which is strongly against any rapprochement with the United States. I'm not sure that they will allow any engagement with Washington," Azodi said.

"The deep state" is thought to be "the secret and semi-secret networks of military, security and intelligence forces that allegedly profess support for Iran's Supreme Leader Ayatollah Ali Khamenei,"  according to the Huffington Post.

"So we really have to wait and see if Rouhani can manage to get the approval of Ayatollah Ali Khamenei and if the Trump Administration is willing to talk to Iran," Azodi added.

He predicted an "extremely difficult" development of relations between Tehran and Washington during President Rouhani's second term, especially given the existence of "the deep state" in Iran.

"His re-election ensures the predictability of Tehran's actions both in relations with Russia and in the most pressing issues on the international agenda," Slutsky told reporters.

© REUTERS / Fatima Zahra Animation Studios
Profit and PR: Key Reasons Why Iran Might Become Next Target for US Tomahawks
Konstantin Kosachev, head of the Russian Upper House's Foreign Affairs Committee, also stressed the importance of Rouhani's re-election, calling it a "good sign both for the country and for the world."

According to Kosachev, Rouhani knows how to make agreements and aims for them, which is "a good signal for the whole unstable region and for Russia."

US Imposes Iran-Related Sanctions on Individuals, 4 Entities, Including Chinese

US Company Seeks Cooperation With Iran in Oil Industry