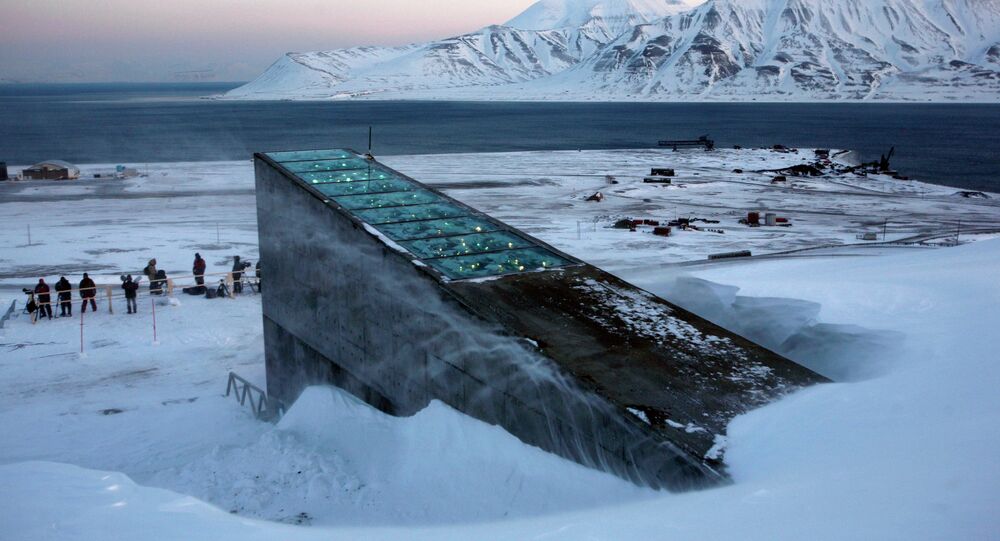 The Svalbard Global Seed Vault, the last-resort storage site for seeds designed to protect global plant biodiversity in the event of a planetary disaster or nuclear war, was almost flooded because of extremely high temperatures in the Arctic.

© AP Photo / John McConnico
A Step Closer to the End? Syria War Prompts First Withdrawal from Doomsday Seed Vault
The Global Seed Vault was specifically designed with nuclear war in mind. It was even supposed to withstand a mythical nuclear winter — but it was nearly foundered by global warming.

The storage facility's entrance was swamped by melted and then refrozen permafrost (soil and water) after extremely high temperatures on Svalbard caused an unusual amount of heavy rain instead of light snow to fall.

"A lot of water went into the start of the tunnel and then it froze to ice, so it was like a glacier when you went in," said Hege Njaa Aschim, from the Norwegian government, which owns the vault.

Fortunately, the water froze before it could reach the vault itself and damage the seeds contained there. The ice was broken up and removed by the vault employees, but the breach has raised concerns over the storage's security.

"It was supposed to [operate] without the help of humans, but now we are watching the seed vault 24 hours a day," Aschim said. "We must see what we can do to minimize all the risks and make sure the seed bank can take care of itself."

According to Aschim, the breach happened because engineers never considered that the Arctic's layer permafrost, which is supposed to be, as the name suggests, permanent frost, would melt.

"It was not in our plans to think that the permafrost would not be there and that it would experience extreme weather like that," Aschim said.

"The Arctic and especially Svalbard warms up faster than the rest of the world. The climate is changing dramatically and we are all amazed at how quickly it is going," says Ketil Isaksen of Norway's Meteorological Institute.

The vault crew is now performing maintenance work to waterproof the entire 100-meter-long tunnel into the mountain, with trenches are being dug to channel the rain and the melting permafrost away. Workers will also remove some electrical equipment that produces heat and will install pumps to take away the water in case other protections fail.

What concerns the scientists the most is whether the weather the vault recently experienced was an anomaly or if it is going to repeat in future years.

"We have to find solutions. It is a big responsibility and we take it very seriously. We are doing this for the world," Aschim said.

At Least One Dead as Avalanche Hits Norway's Svalbard