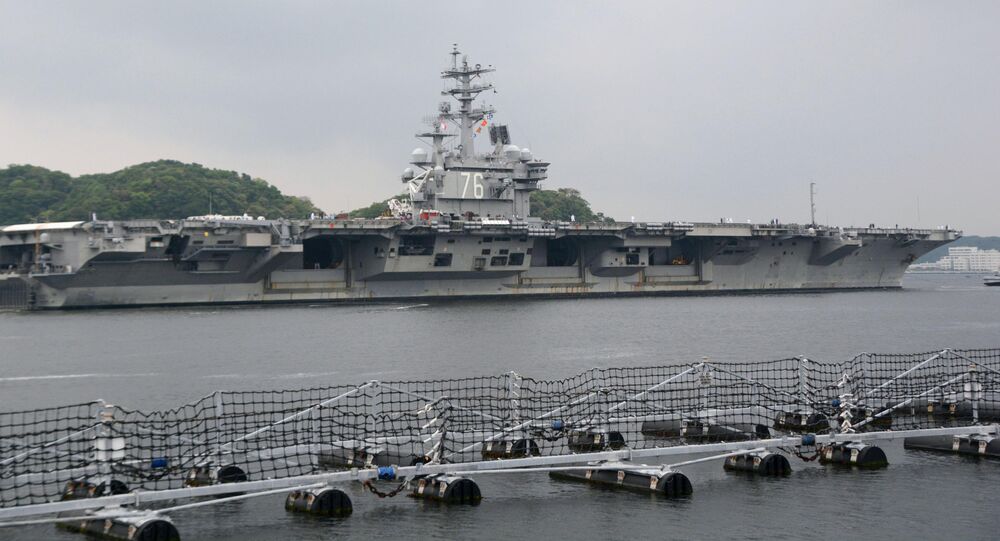 US Redeploys Aircraft Carrier to Korean Peninsula, But It Isn't About Pyongyang

In an interview with Sputnik, Russian security expert Lev Korolkov commented on a possible goal of the US aircraft carrier Ronald Reagan being redeployed to the Korean Peninsula.

The Ronald Reagan is ultimately expected to replace the USS Carl Vinson, which was stationed near the Korean Peninsula last month as a show of force amid rising tensions in the region, CNN reported.

The US Navy is moving a second aircraft carrier, USS Ronald Reagan, to the Korean Peninsula. https://t.co/846Nd8uhwG

The latest North Korean missile test was carried out on Sunday, when a ground-to-ground intermediate ballistic missile fell into the Sea of Japan.The next day, the country's government confirmed the missile had successfully reentered the Earth's lower atmosphere.

Speaking to Sputnik, Russian security expert Lev Korolkov described what the US Navy hoped to accomplish by redeploying the Ronald Reagan.

"First of all, it is a show of force and an attempt to put pressure on Russia and China, the main powerhouses in this region. The second task is to support Washington's allies, namely, Japan and South Korea. And only lastly, it is directed against North Korea," Korolkov said.

According to him, everyone knows perfectly well that despite the declarations of its leader Kim Jong UN, North Korea will never be the first to launch an attack.

"Even so, the US wants to exert pressure on Pyongyang to make it suspend work on developing nuclear weapons, given that North Korea is making some progress in this field. But there will be no conflict because neither side is ready for it," Korolkov concluded.

Meanwhile, media reported that newly-acquired satellite images show that North Korea is modernizing its Sohae Satellite Launching Station located in the North Pyongan province, from which four ballistic missiles were launched in March 2017.

According to the analytical portal 38 North, the footage showed on Thursday that new roads were being constructed all through the launch site. The images also revealed new observation points and an excavation serving a yet-unknown purpose near the launching pad.

© REUTERS / KCNA
N Korea Missile Test Comes 'Very Close' to Threshold for US Retaliation
On March 6, North Korea launched four missiles from Sohae in the direction of the Sea of Japan and tested a new high-thrust rocket engine 12 days later.

Since the beginning of 2016, North Korea has carried out a number of missile launches and nuclear tests, prompting worldwide criticism and an escalation of tension on the Korean Peninsula.

As a result of Pyongyang's actions, the UN Security Council tightened sanctions against North Korea in an attempt to force the country to put an end to its ballistic missile launches and nuclear tests.