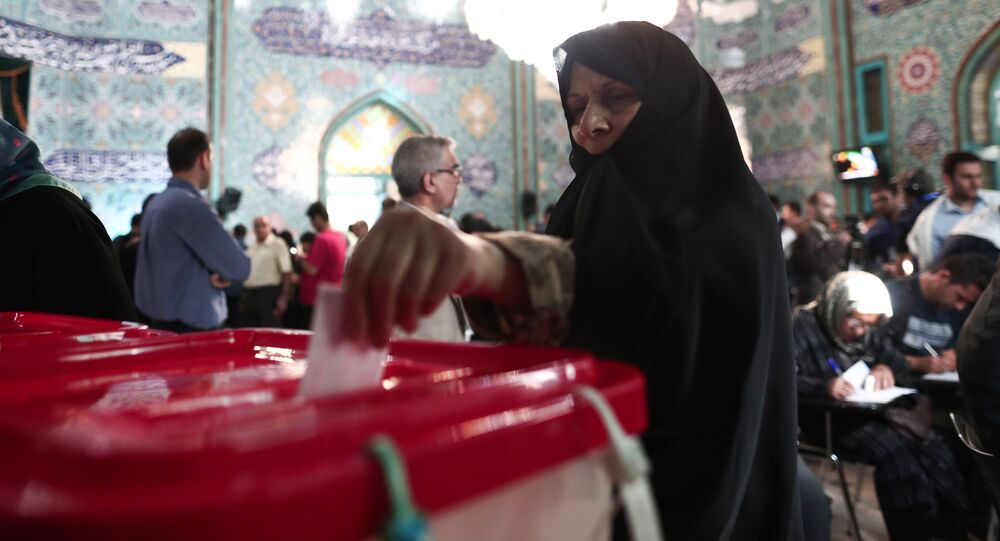 What Russia Has to Say About the Presidential Election in Iran

With Iran voting in presidential elections on Friday, many continue to speculate on Moscow's position on the matter; Russian political analyst Nikolai Kozhanov, for his part, said that actually, Moscow isn't taking a side.

© REUTERS / TIMA ATTENTION EDITORS
Iranians to Cast Ballots in Presidential Election on Friday
In an interview with Sputnik Persian, Russian political analyst Nikolai Kozhanov said that Moscow is not particularly concerned about the results of the presidential elections in Iran, which kicked off on Friday.

Any candidate who gains the support of more than 50 percent of voters will become the country's president.

However, if no candidate reaches this threshold, a run-off election will be carried out between the two presidential hopefuls who receive the highest number of votes.

Speaking to Sputnik, Kozhanov predicted that the main competition will take place between Hassan Rouhani and Ebrahim Raisi, something that he said is confirmed by the latest opinion polls and Iranian experts' forecasts.

In addition, it is worth taking into account the charisma of these two political figures, who clearly overshadow the other presidential candidates, according to Kozhanov.

"Making predictions on who will finally win is very dangerous and difficult. The Iranian elections are known for their being influenced by a factor of unpredictability," he said.

Kozhanov, however, added that "judging by the current situation, Rouhani has every chance of being re-elected for a second term."

"During [the pre-election] debates, Rouhani managed to demonstrate that he is much better than his opponents, even from the point of view of the discussion," Kozhanov said.

"For Russia, strictly speaking, it doesn't matter who will win because the political field [in Iran's elections] is represented by different gradations of conservative forces; they all know full well  that under the current state of affairs, Iran has no alternative but to continue in maintaining a sustainable dialogue with Russia," he concluded.

Earlier, Russian Foreign Ministry Spokeswoman Maria Zakharova said that "how the elections in Iran will be taking place is exclusively within the competence of the Iranian people."

© REUTERS / President.ir/Handout
Unlikely Bedfellows: How Trump Sanctions Relief Could Aid Rouhani in Elections
"We will work with those who will come to power in Iran. We proceed from the assumption that the relations between our two countries should preserve positive dynamics and historical ties that we had developed," she said.

Zakharova recalled that traditionally, Russia's position on an electoral process is in line with the UN Charter, which clearly warns against meddling in the internal affairs of other countries and exerting pressure on a state.