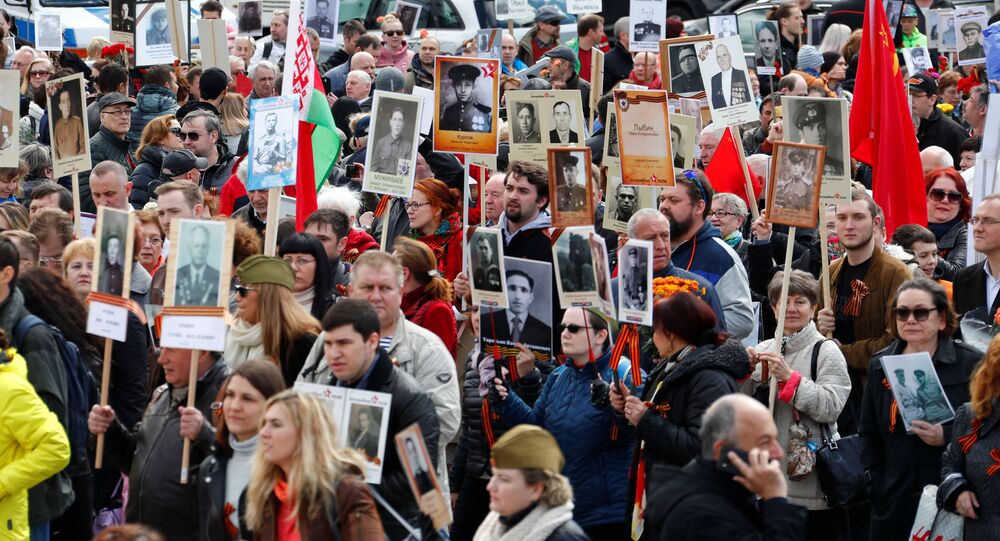 Millions of people in Russia and countries across the world have participated in the "Immortal Regiment" marches to honor those who fought against Nazism in the World War II.

MOSCOW (Sputnik) — The "Immortal Regiment" is a patriotic initiative that commemorates WWII soldiers in marches held across Russia and other countries. Within the framework of the movement, people march with images of their family members, who had participated in World War II. For the first time, the rally took place in 2012, in Russia's Tomsk and then has spread to other cities and countries across the world.

© Sputnik / Vladimir Grebnev
Victory Day: World Order Created by Soviet Defeat of Fascism ‘Inconvenient’ for West
According to the Russian Interior Ministry, more than 800,000 people joined the commemorative march in Moscow, which has become an absolute record for the event. The march followed the annual Victory Day parade on the Red Square. Russian President Vladimir Putin participated in the event for the third time. Like in the previous years, he carried a photo of his father, who had served as a sailor in Sevastopol.

In St. Petersburg, hundreds of thousands of people marched through Nevsky Prospect, with city’s Governor Georgy Poltavchenko taking part in the event, according to the St. Petersburg administration website. The march ended at the Palace Square, where a gala concert was held.

According to organizers, record 270,000 people marched through the Red Prospect in Russia’s third-most populous city of Novosibirsk, compared to some 250,000 people last year.

Hundreds of thousands of residents of Yekaterinburg took part in the march in the city center, including acting Governor of Sverdlovsk Region Yevgeny Kuivashev, who carried the portrait of his grandfather – participant of the Great Patriotic War.

In Russia’s fifth most populous city Nizhny Novgorod, some 20,000 residents took part in the commemorative event, marching with portraits of loved-ones through the city center. The march ended with participants singing Russian wartime songs.

© Sputnik / Vladimir Astapkovich
About 8 Mln Russians Took Part in 'Immortal Regiment' Marches Across Country - Ministry
The "Immortal Regiment" march in Kazan gathered around 100,000 people, ending at the Millennium Square in the city center. During the march, 600 people carried the Victory Banner of 200 square meters (2,152 square feet). About 45,000 city’s residents participated in the event last year.

In the Crimean city of Sevastopol, more than 30,000 people, including Dmitry Ovsyannikov, the acting governor, gathered in the city center to participate in the commemorative rally.

According to the Russian Interior Ministry’s spokeswoman Irina Volk, as many as 7.8 million people participated in the "Immortal Regiment" marches across the country this year.

The "Immortal Regiment" events were also held in various cities in Europe as well as in the United States.

This year, at least 20 US cities hosted the marches ahead of the Victory Day celebrations, compared to nine cities in 2016. The "Immortal Regiment" marches were held in Washington, New York, Boston, Philadelphia and Los Angeles, among other locations. Hundreds of people, including children and war veterans, marched down the central streets of Washington DC on Sunday despite the rain and chilly weather.

© REUTERS / Fabrizio Bensch
Third Annual 'Immortal Regiment' March Held in Berlin
In Paris, the "Immortal Regiment" parade took place on Monday, with participants being guarded by police for security reasons. Russian Ambassador to France Alexander Orlov took part in the event together with his spouse and children, all of them holding the portraits of their relatives who had participated in World War II. According to Orlov, the Paris parade gathered several hundred people this year, which is more than in 2016. The ambassador told Sputnik that the march in France was a demonstration of the strong Russian-French ties.

Thousands of people carrying portraits of their relatives gathered at the Trafalgar Square in London on Tuesday to mark the 72nd anniversary of victory over Nazi Germany.

The third annual "Immortal regiment" march was also held in Berlin. Several hundred people carrying photographs of their relatives who participated in the Great Patriotic War gathered near the Brandenburg Gate and then marched to the memorial to the fallen Soviet soldiers in Tiergarten Park.

© Sputnik / Vladimir Pesnya
‘Immortal Regiment’ in Tallinn Could Gather Over 1,000 People - Organizer
The "Immortal Regiment" marches were also held in the capital cities of the Baltic states – Riga, Vilnius and Tallinn, attracting thousands of participants.

Belarus’ capital Minsk was among many other former Soviet cities, which commemorated the WWII soldiers with the "Immortal Regiment" march.

In the Kazakh capital of Astana, about 20,000 people took part in the event.

COMMEMORATIVE MARCHES IN OTHER COUNTRIES

In Israel, thousands of people marched through the center of Jerusalem to mark the Victory Day. Veterans and home-front workers, prisoners of concentration camps and ghettos from different parts of the country took part in the march, alongside the "Immortal Regiment," despite hot weather.

© Sputnik / Vladimir Presnya
Israel Marks Victory Day by 'Immortal Regiment', Veterans Marches in Jerusalem
Over one hundred people took part in the march in the Chinese capital of Beijing, according to a Sputnik correspondent. The event was organized with the help of the Russian Embassy in China. The participants marched across the Chaoyang park stopping at the sculpture symbolizing a Soviet pilot, then sent air balloons with the name of the event up in the sky before honoring the memory of the war victims with a minute of silence. Russian Ambassador to China Andrei Denisov took part in the ceremony and laid flowers at the memorial.

© AFP 2020 / Sergei SUPINSKY
Ukraine Puts Eurovision Above Celebrating Victory Over Nazi Germany
In Ukraine, the celebrations of the Great Victory were marred by provocations and clashes with radicals, as well as by attempts to block the "Immortal Regiment" march. The "Immortal Regiment" marches took place in multiple Ukrainian cities, while the biggest one was held in Kiev, with some 3,000 people having participated in the action.

Despite the fact that Kiev police tightened up security at the Park of Eternal Glory — a final destination of the march, a group of radicals managed to block the entrance to the park. Other radicals gathered at the Eternal Flame memorial, preventing participants of the march from laying flowers, which finally led to clashes between the sides.