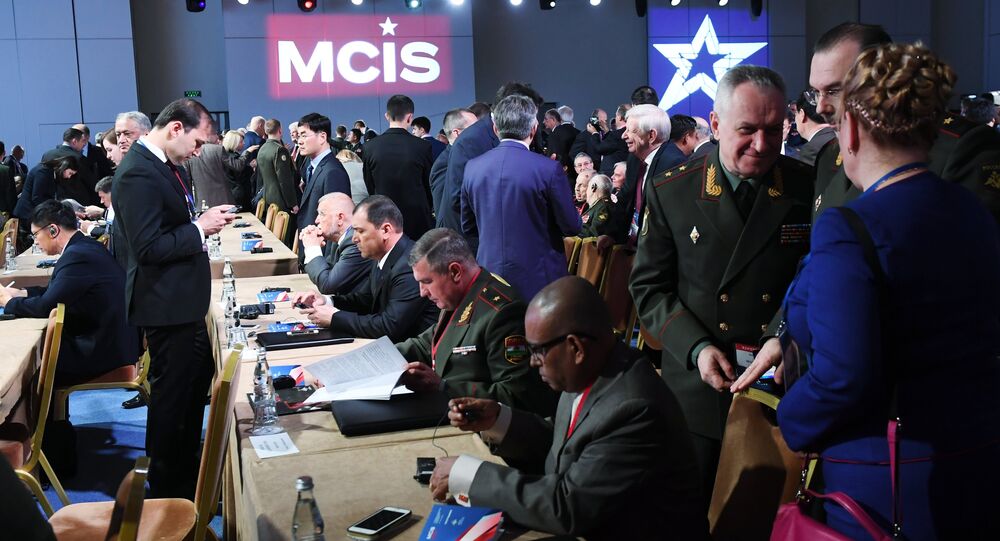 The main issues of the second day of the VI Moscow Conference on International Security, held under the title "Global Security: The XXI Century Challenges" on April 26-27 in the Russian capital.

MOSCOW (Sputnik) – Discussions on the second day of the VI Moscow Conference on International Security were dominated by the challenging issues of anti-terrorism cooperation and the volatile situation in the Middle East, particularly Syria and Afghanistan.

The security conference, held under the title "Global Security: The XXI Century Challenges" on April 26-27 in the Russian capital, saw the participation of more than 750 guests from over 80 countries.

On Wednesday, participants in the conference called for more global anti-terrorism efforts amid the spread of radical groups such as the Islamic State (ISIL, also known as Daesh) terrorist organization, which is banned in Russia and numerous other countries.

© Sputnik / Sergey Orlov
Russia 'Doing Everything' to Protect Itself Amid NATO Expansion
Russian defense officials raised concerns over the expansion of the North Atlantic Treaty Organization (NATO), warning that this only heightens international tensions. Russian Chief of General Staff Gen. Valery Gerasimov stressed on Wednesday that long-overdue "open and pragmatic" ties between Russia and the West could bolster security, particularly in Europe.

On Thursday, Russian officials expressed doubts about the prospects of a potential boost in Russia’s cooperation with the West, including in the Middle East, in light of the recent foreign policy decisions of the new US administration.

"Many believed that common sense would finally prevail and the countries would together, on the basis of mutual respect and trust, move toward resolving regional conflicts and seek answers to such challenges as international terrorism. These hopes are not yet met," Naryshkin told the Moscow security conference.

Guterres stressed that the metro blast that struck St. Petersburg earlier in April must move the international community to improve counterterrorism ties, amid the spread of global terrorism that is not lessening, despite the individual efforts of UN member-states.

Egypt’s Assistant Defense Minister Mohamed Elkeshky said Thursday that Cairo was calling for more cooperation in the struggle against terrorism, "with any of the countries both in the West and the East."

According to Russian Chief of General Staff Gen. Valery Gerasimov, the West ignores Moscow’s proposals on joining efforts in countering terrorism, which creates favorable conditions for the Islamic State (IS, also known as Daesh) terrorist group.

US STRIKES IN SYRIA IMPEDE FIGHT AGAINST TERRORISM

© REUTERS / Joshua Roberts
After Dropping MOAB on Afghanistan, Trump May Be Considering Escalation
The US missile attack on a Syrian airfield casts doubt on US President Donald Trump's election campaign pledge to jointly combat the Daesh terrorist group, Naryshkin added.

On April 7, the United States launched 59 Tomahawk cruise missiles at Syria's military airfield in Ash Sha’irat, claiming it was a response to the alleged chemical weapon use in the Idlib province.

"The recent US Tomahawk strike at the air base in Syria, which served as a stronghold for government troops to attack terrorist positions, makes us question the sincerity of President Trump's election promises to make every effort to forge a joint international struggle against the Islamic State," Naryshkin stressed on Thursday.

On April 4, the National Coalition for Syrian Revolutionary and Opposition Forces blamed the Syrian government for an alleged chemical weapon attack in Syria’s Khan Sheikhoun. Damascus denied any involvement in the Idlib incident, while the Syrian army said it did not possess chemical weapons as the Syrian chemical arsenal had been destroyed, as verified by the Organization for the Prohibition of Chemical Weapons (OPCW) in January 2016.

© Sputnik / Maxim Blinov
'The Russians Are Most Effective in Syria' - Philippines Defense Minister
On Wednesday, speaking at the Moscow security conference, Russian Foreign Minister Sergey Lavrov called for an "open and transparent" investigation into the Idlib incident.

Acting Secretary General of the Collective Security Treaty Organization (CSTO) Valery Semerikov told the security conference Thursday that the West had been using chemical weapon attacks, carried out by terrorists in Syria and Iraq, to discredit the government of Syrian President Bashar Assad and to downplay the role that Russia has played in combating terrorism in the region.

Philippines' National Defense Secretary Delfin Lorenzana told Sputnik on the sidelines of the conference on Thursday that Russia has proven to be "most effective" in Syria, while the US-led coalition and Washington, which has been supporting the so-called Syrian "moderate opposition," will bring further chaos to Syria.

Daesh to Increase Terrorist Activities in Middle East, Internationally - Stratfor
According to the Russian Foreign Intelligence Service (SVR) Director Sergey Naryshkin, the Middle East region as a whole has fallen hostage to a Western geopolitical game.

"Foolish Western attempts to reshape the particularities of Afghanistan, Iraq, Libya, and Iran based on their own templates have not led to anything but waves of chaos and violence," Naryshkin warned, speaking at the Moscow security conference on Thursday.

The SVR director emphasized that the US deployment of the "Mother of All Bombs" in Afghanistan was a good example of Washington’s "show of force not [being] coordinated with anyone."

© Sputnik / Alexander Natruskin
Daesh Militants Move From Syria, Iraq to Afghanistan, Posing Threat to CSTO - CSTO Chief
On April 13, the US military dropped the Massive Ordinance Air Blast (MOAB) bomb in Afghanistan’s Nangarhar province, targeting a tunnel complex believed to be used by the Islamic State terrorist group, according to the US Central Command. The MOAB, dubbed the "Mother of All Bombs," is the largest non-nuclear bomb in the US military arsenal.

On Wednesday, Col. Gen. Igor Korobov, chief of the Russian General Staff's Main Directorate, raised concerns over the strengthening of IS positions in Afghanistan. Speaking at the conference, Korobov said that the number of Daesh terrorists in Afghanistan could grow from 3,500 to at least 7,000 by the end of 2018.

According to Korobov, over 10,000 servicemen were killed and more than 11,000 civilians were killed or wounded in Afghanistan last year.

Korobov stressed that the strengthening of Daesh in Afghanistan is facilitated by the availability of funds from areas controlled by the terrorists in Iraq and Syria, as well as foreign "sponsors."

Valery Semerikov added that Daesh terrorists are now moving from Syria and Iraq to Afghanistan, which poses a threat to the countries of the CSTO.

US ‘DOUBLE STANDARDS’ IN RELATION TO NORTH KOREA

© REUTERS / Yonhap
Lavrov: Russia Hopes US Not to Take Unilateral Actions Against North Korea
Talking about North Korea's nuclear program development, Sergey Naryshkin said that it differs little from the United States' withdrawal from the Anti-Ballistic Missile Treaty (ABM) in terms of non-proliferation.

"North Korea is subject to fierce international pressure due to its withdrawal from the Treaty on the Non-Proliferation of Nuclear Weapons [NPT] and its excessive activity in the nuclear sector, but this step by Pyongyang differs little from Washington's decision to withdraw from the Anti-Ballistic Missile Treaty," Naryshkin told an audience at the Moscow conference.

On December 13, 2002, then US president George W. Bush announced that Washington would unilaterally withdraw from the ABM Treaty with the USSR. The treaty, signed in 1972, barred the parties from deploying anti-ballistic missile systems that could cover the entire territory of their countries, or providing a base for such broad-range defense.

The NPT came into effect in 1970 with the aim to prevent the spread of nuclear weapons. North Korea withdrew from the treaty in 2003. In 2005, the country declared itself a nuclear power. The United States, Japan and South Korea, as well as Russia and China, took part in talks with North Korea on the denuclearization of the Korean peninsula between 2003 and 2009, when Pyongyang withdrew from the talks.

A Chinese military representative told the Moscow security conference on Thursday that China was proposing a simultaneous halt to North Korea’s pursuit of nuclear weapons.

© Sputnik / Iliya Pitalev
North Korea Ready to ‘Go to the End’ in Confrontation With US - Mission to UN
On Wednesday, a representative of the Chinese military stressed at the Moscow security conference that US actions in the region run counter to the efforts made by the United Nations and the international community to resolve the North Korean nuclear issue peacefully, through dialogue.

Lavrov told the security conference on Wednesday that military options in resolving the North Korean issue are fraught with disaster in the region. Lavrov voiced Moscow's disapproval "with the disproportionate build-up under the pretext of the North Korean threat of the US and its regional allies' military activity."

Russia plans to condemn US military maneuvers on the Korean Peninsula at a meeting of the UN Security Council on Friday, according to Russian Deputy Foreign Minister Gennady Gatilov.

Naryshkin told the conference on Thursday that the classification by NATO of cyberspace as a new operational area "is about legalizing the planning and carrying out of cyberattacks by NATO against a potential enemy."

Naryshkin warned that NATO’s decision is a serious threat to regional and global stability.

He contrasted Russia’s cybersecurity approach with that of NATO. "The difference is that NATO seeks to ensure cybersecurity only for a narrow range of states, members of the alliance. Russia stands for equal security for all states."

According to deputy head of the Main Operational Directorate of the Russian General Staff, Maj. Gen. Igor Dylevsky, the information space has become a new theater of military operations as more than 120 countries are developing information weapons and state armies are setting up structures intended for action in the information sphere.

He told the Moscow security conference on Wednesday that the United Nations should expand its list of acts of aggression stipulated by UN General Assembly Resolution 3314 (1974) to include information warfare attacks that have led to serious human casualties and destruction of infrastructure. He also called for the initiation of a mechanism within the UN framework to stop the proliferation of information weapons that could get in the hands of terrorists or cause technogenic catastrophes.

'Depressing': Russia Sees No Attempts by NATO to Restore Dialogue