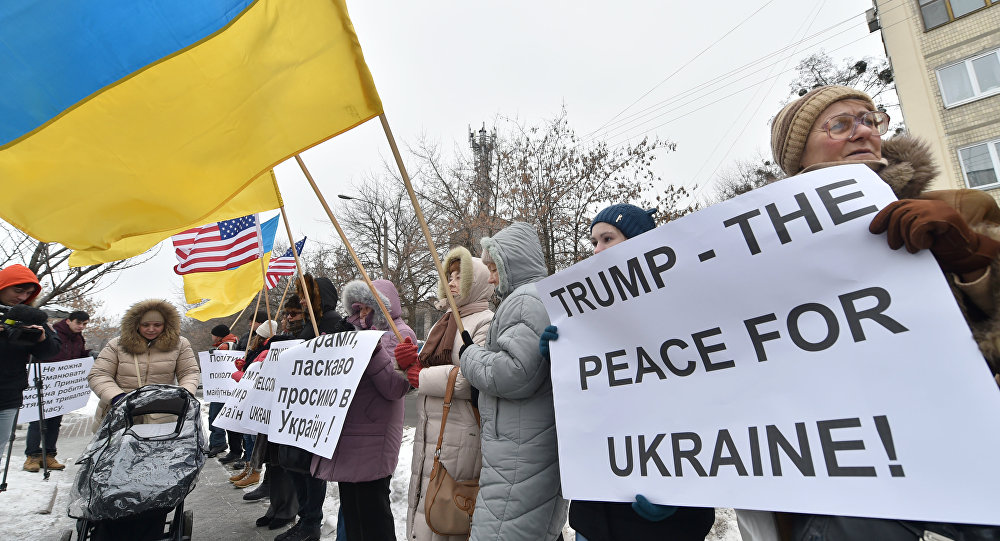 A significant reduction in US financial assistance to Ukraine can be perceived as a form of political pressure on Kiev, Russian political scientist Boris Shmelev told Sputnik.

© AFP 2019 / YURIY DYACHYSHYN
Why is US Slashing Military Aid to Ukraine?
In an interview with Sputnik, Russian political scientist Boris Shmelev described Washington's decision to considerably cut its financial assistance to Ukraine as a sort of signal to Kiev.

The interview came after the magazine Foreign Policy reported that the administration of US President Donald Trump is considering a proposed project stipulating a reduction in overall foreign financial assistance in fiscal year 2018, including a significant cut in aid to Ukraine.

The news outlet quoted the State Department budget document as saying that Ukraine is facing a 68.8 percent reduction in the US financial aid that had been allocated to it to revive its economy and implement reforms.

Speaking to Sputnik, Boris Shmelev of the Institute of Economics of the of the Russian Academy of Sciences said that such a significant cut in US financial assistance to Kiev once again indicates that Ukraine is not among the current US Administration’s top foreign policy priorities.

In any case, it is too early to speak of the Trump administration finally elaborating its foreign policy concept, according to him.

"However, it seems that from the point of view of this administration, Ukraine and the Ukrainian crisis are Europe's headache. In other words, Washington believes that it is Europe, the EU and Germany in the person of Chancellor Angela Merkel that should deal with resolving the Ukrainian crisis," Shmelev said.

© Sputnik / Alexander Kryazhev
The Coal Facts: Kiev's Plan to Import US Anthracite Lacks Economic Justification
He referred to America's "global commitments," such as the Syrian crisis and the situation on the Korean Peninsula, where he said the US is seeking "to show its worth."

He also did not rule out that the reduction in US financial assistance to Ukraine could be seen as a kind of signal to Kiev.

"It is a sort of pressure on Kiev because they demand that the Minsk peace agreements should be implemented. Of course, it is possible to constantly blame Russia for allegedly blocking the implementation of these agreements, but one should keep in mind that Moscow is not a party to the conflict in Ukraine," Shmelev pointed out.

He also drew attention to the fact that as for Europe, it is already tired of the endless Ukrainian crisis and Kiev's inconsistent position on the matter.

He recalled that the situation in Ukraine is expected to top the agenda of talks between Chancellor Angela Merkel and senior Russian officials during her visit to Moscow in early May.

"Of course, it is too early to predict how these talks will wrap up but it's clear already now that Europeans are concerned about and tired of the Ukrainian crisis, which shows no signs of abating. During the talks, Ukrainian President Petro Poroshenko says one thing but under the influence of the [country’s] radical forces does quite the opposite," Shmelev said.

In February 2015, the Kiev forces and supporters of Donbass independence in eastern Ukraine signed a peace agreement in the Belarusian capital of Minsk.

© Sputnik / Stringer
Enough is Enough! ... US 'Tired of Ukraine', Wants to Distance Itself From Kiev
The deal stipulates a full ceasefire, the withdrawal of weapons from the line of contact in Donbass, as well as constitutional reforms that would give special status to the Donetsk and Lugansk People's Republics.

US Assistance to Ukraine Likely to Decline in 2017