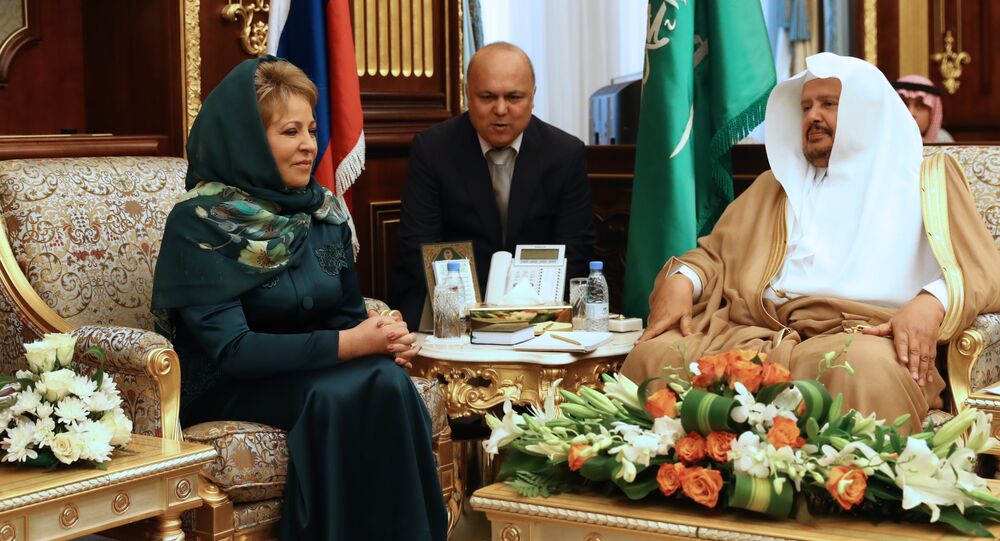 © Photo : Pixabay
Russia Hopes to Continue Cooperation on Oil Output Reduction With Saudi Arabia
In an interview with Sputnik, Muhammed al-Zalfa, a former member of Saudi Arabia's Consultative Assembly, specifically touted the political clout of Moscow and Riyadh, which he said may cooperate in order to resolve the Syrian crisis.

Speaking to Sputnik, al-Zalfa told Sputnik that Matviyenko's trip to Saudi Arabia indicates the seriousness of the negotiations, which may help bring stability to the region.

"Russia is one of the [major] world powers, and Saudi Arabia has a lot of [political] weight in the region, which is why both sides can have a significant impact on settling regional crises there. By joining forces, these countries can find solutions to a wide range of Middle Eastern conflicts, especially in Syria," al-Zalfa said.

He pointed out the positive effect of the introduction of a visa-free regime between Moscow and Riyadh for the development of bilateral relations.

Saudi Arabia is interested in cooperation with Russia in terms of military equipment as well as the energy and insurance sectors, in order to avoid putting all its eggs in one basket, according to al-Zalfa.

Russian expert Andrey Ontikov, for his part, told Sputnik that "the current situation prods the two countries to strengthen ties despite their disagreements about the future of Syrian President Bashar Assad."

"There are many opportunities for cooperation in the economic and political spheres. This meeting [between Matviyenko and Salman bin Abdul Aziz al-Saud] was needed to clarify the positions of the parties on the crises in Syria and Yemen," Ontikov said.

According to him, a political solution to the Syrian crisis cannot be achieved without Saudi Arabia taking part in the negotiating process, especially in Kazakhstan's capital Astana.

"There are constant talks between the countries, but [solutions] need to be put into practice, for example, when it comes to the fight against terrorism," he added.

Earlier this month, Kazakh Foreign Minister Kairat Abdrakhamanov said that preparation is continuing of talks on the settlement of the Syrian crisis in Astana; they are set to take place in May.

© REUTERS / Amir Cohen
Israel-Backed Anti-Iran 'NATO 2.0' Puts Russia and Saudi Arabia 'on Thin Ice'
The intra-Syrian talks in Astana are mainly devoted to the ceasefire arrangement in Syria and everything that is beyond the monitoring of the government in the country is being widely discussed in the international arena, Abdrakhmanov added.

Astana hosted three rounds of talks on the Syrian settlement brokered by Russia, Turkey and Iran, held on January 23-24, February 15-16 and March 14-15.

During the talks, the participants agreed to set up a ceasefire monitoring group, among other issues. The next meeting on Syria in Astana is expected to take place in early May.