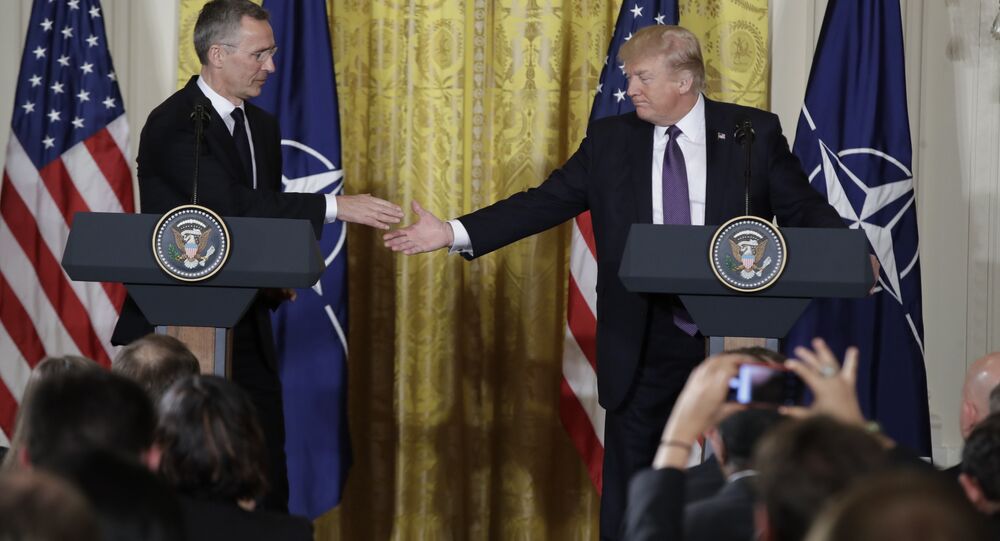 At a meeting in Brussels last month, US Secretary of State Rex Tillerson stated, "As President Trump has made clear, it is no longer sustainable for the US to maintain a disproportionate share of NATO's defense expenditures."

On Tuesday, Trump signed a US instrument of ratification to allow the Balkan nation of Montenegro to join NATO following a Senate vote in March to support the ratification.

During the conference on Wednesday, the president said, "Since 1949, the number of NATO states has more than doubled."

"I'll work closely with our NATO allies," he said, "to adapt to the threats of the future."

"We must work together to solve the disaster taking place in Syria," he added. "It is time to end this brutal civil war, defeat terrorists, and allow refugees to return home."

Trump said other countries must pay their "fair share" instead of relying on the US, which he says will make everyone more secure. Pointing to NATO spending criteria, Trump said "many have not been doing that."

Having taken on more responsibility for fighting international terrorism, NATO is once again relevant, the president said. Before his inauguration, Trump had criticized NATO for what he called its reluctance to engage fully in fights against Daesh and other terrorist groups. "I said NATO was obsolete. It's no longer obsolete," he said, implying that his sharp words led to the alliance's increased participation in the fight against terror.

"A strong NATO is good for Europe, but it is also good for the United States," Stoltenberg declared.

In a "dangerous" world, the US benefits from NATO participation, the NATO secretary said. "We launched NATO's biggest military effort ever in Afghanistan…thousands have served shoulder-to-shoulder with American troops," he added.

He said NATO's contribution to the fight in Afghanistan represents NATO's commitment to fighting terrorism, but did not mention Syria or Iraq. The duo had a "major" discussion on "burden-sharing" in the alliance during their Wednesday discussions. "It is about spending more on defense. It is about providing the capabilities we need…this means cash, capabilities, and contributions," Stoltenberg said.

He added that there has been significant "momentum" to boost spending among NATO continues, adding "we know we need to pay our fair share."  He said chemical attacks "cannot go unanswered" in Syria but did not lay out a NATO strategy for how the military alliance would move forward in Syria.

"I think Tillerson had a very successful meeting in Russia," Trump said, "maybe better than anticipated," but it's less about discussions and more about accomplishing goals. Tillerson and Russian Foreign Minister Sergei Lavrov said that a working group would be created to solve low-level issues between Washington and Moscow.

"Putin is the leader of Russia. Russia is a strong country," Trump said, saying NATO should look to improve relations with Moscow.

"It would be a fantastic thing if we got along with Putin, with Russia … I would like to get along with everyone … by the time I'm finished [the world] will be a much better place," Trump vowed. He said that Washington would like to cooperate with Beijing in the Korean Peninsula, but that the US would "go it alone, but going in alone means going in with other nations."

"Burden sharing has been my top priority," Stoltenberg said. "Things are starting to move in the right direction," but there is still more work to do, Stoltenberg said. There was a 3.8 percent "real increase" in Europe and Canada last year, he said. "There's a lot of money that hasn't come back over the years, and we'll be talking about that too," Trump said.

"I think it's wonderful that [China] abstained" on the UN Security Council resolution condemning Syria.

"We have to find ways to avoid a cold war, a new arms race" Stoltenberg said. This should be done by deterrence, which entails increased defense spending and keeping a stable alliance.

Trump said "hopefully [Europeans] will have nothing to fear" from Russia as he seeks to de-escalate tensions. "There won't be fear of anybody. That's the way it should be," he said, adding a bold vow to solve all the world's security conflicts by the end of his term.