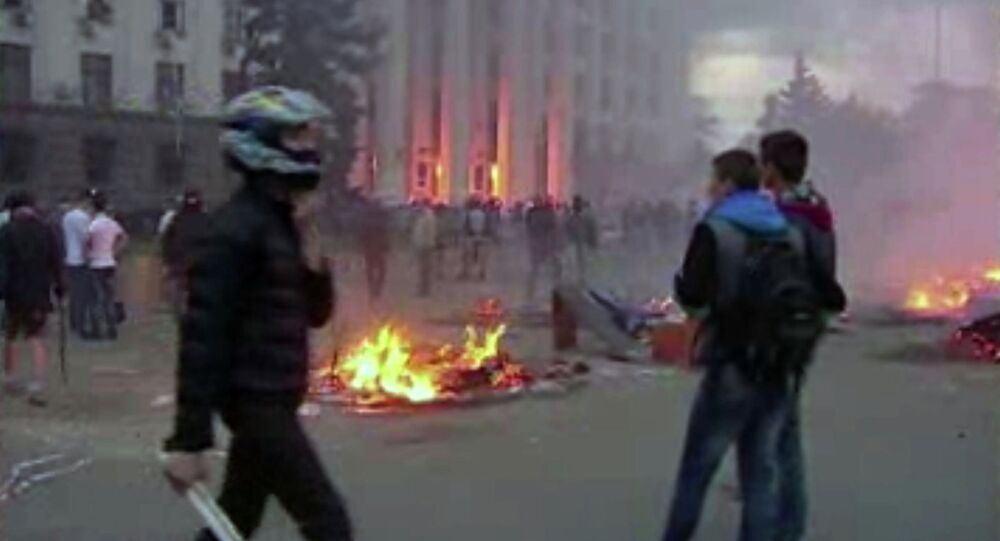 The International Day of Solidarity with the People of Odessa on Monday will include activities in 19 cities of 12 countries where, according to organizers from the US-based Odessa Solidarity Campaign, activists will protest against "the increasing political repression in the city of Odessa, Ukraine, by that country’s federal government."

MOSCOW (Sputnik) — The activists of Odessa Solidarity Campaign will visit Ukrainian embassies and consulates in France, Germany, Greece, Hungary, Ireland, Italy, Poland, Sweden, Switzerland, the United Kingdom and the United States to deliver a letter calling on Ukrainian President Petro Poroshenko to release all political prisoners and stop the current repression in Odessa against the relatives of about 50 victims of the arson at the House of Trade Unions that took place in May 2014.

© AP Photo / Vadim Ghirda
One Year After Odessa Massacre in Ukraine: How Tragedy Unfolded (VIDEO 18+)
The event will be coincided with the 73rd anniversary of the liberation of Odessa from the Nazi occupation. After delivering the letter, the activists are expected to hold rallies in front of embassies.

On May 2, 2014, radical supporters of the new government in Kiev, which came to power after a coup in February 2014, blocked anti-government protesters in Odessa's House of Trade Unions and set the building on fire by hurling Molotov cocktails inside. The tragic incident left some 50 people dead while the overall number of casualties exceeded 250.