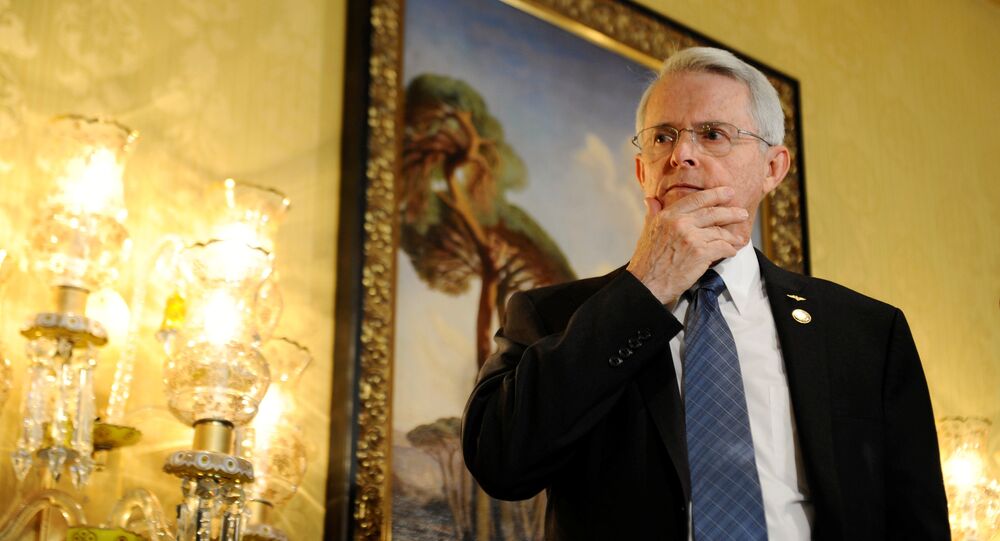 State Senator from Virginia Richard Black in an interview to Sputnik told about the possible reasons of the recent US strike on Syria and US foreign policy crusades.

© Sputnik / Mikhail Voskresenskiy
Syria Settlement Impossible Without Russia-US Cooperation - Russian Lawmaker
WASHINGTON (Sputnik) — US President Donald Trump must recognize the US public is tired of the country fighting wars for foreign states such as Saudi Arabia and Turkey like it is doing currently in Syria, State Senator from Virginia Richard Black told Sputnik.

“It’s very important that Trump understand quite quickly that the American people are sick and tired of being lead like sheep to the slaughter in order to fight wars for Saudi Arabia, for Turkey, for all of these vial, aggressive nations," Black said on Friday.

Black claims the United States started the war in Syria because Saudi Arabia and Qatar wanted to run an oil and gas pipeline across the country into Turkey.

“Part of the timing of this it is possible… had something to do with blocking a successful peace agreement, and in that case it was the rebels who wanted to stop the peace process because they are so weak right now and the Syrian government is so strong,” Black said on Friday.

© AP Photo / Ford Williams/U.S. Navy
US Attack in Syria 'Praised Throughout the Globe' - White House
There is no question, Black continued, that the Syrian rebels possessed sarin gas, the type of which the government was accused of using in an alleged attack earlier in the week.

“I don’t have proof but we know that the Syrian airforce did fire, they did drop some bombs on a warehouse. My guess is the warehouse contained sarin gas mines, artillery shells, that were held by the rebels for later use,” Black explained.

Black said he guessed that by bombing the warehouse, some of those shells were compromised and leakage probably killed some civilians in the vicinity.

Black also claimed that the peace process is “dead” at the moment but hopefully it will return in another couple months.On Thursday night, the United States launched 59 Tomahawk cruise missiles at the Syrian military airfield in Ash Sha’irat, located about 25 miles from the city of Homs. Trump said the attack was a response to the alleged chemical weapon use in Syria's Idlib on Tuesday, which Washington blames on the Syrian government.

© AFP 2020 / SAUL LOEB
US Envoy to UN on Syria Attack: 'We Are Prepared to Do More'
The US missile attack claimed the lives of 10 people, an officer of the Syrian Armed Forces told Sputnik. The Russian Defense Ministry said that the attack left two Syrian servicemen missing, four killed, and six suffering severe injuries from the fire. Homs Governor Talal Barazi said earlier on Friday that at least two civilians from a nearby village and five Syrian servicemen were killed.

Black is the elected representative for Loudoun County, Virginia, who personally met with President Bashar Assad during a visit to Syria in April 2016.