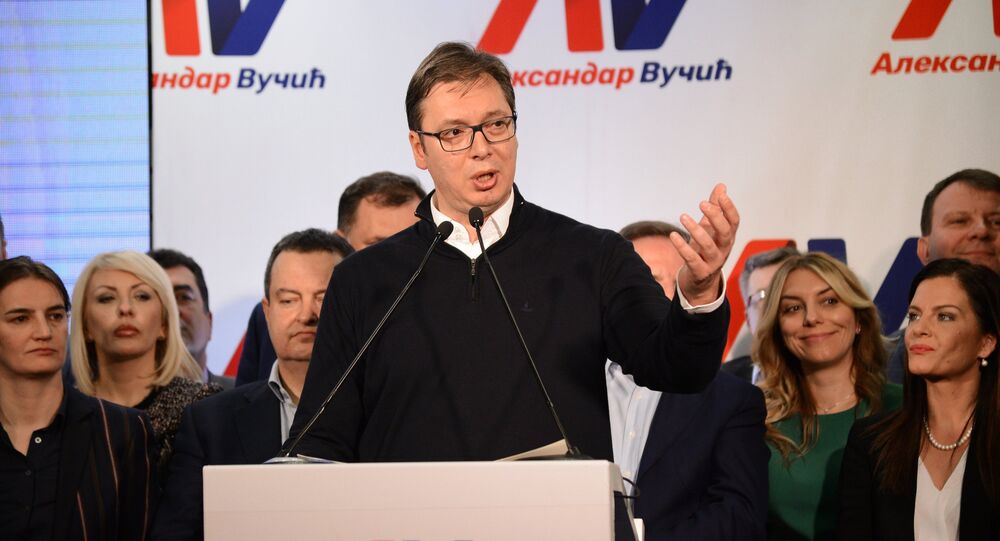 Belgrade's drive to continue its course towards closer integration with the EU while maintaining its friendship with Russia and China underscores the multi-vector nature of Serbian policy, Russian expert Alexander Pivovarenko told Sputnik.

© Photo : Srdjan Popovic
Brothers-in-Arms: Russia Helps Serbia to Modernize Its Air Force Fleet
In an interview with Sputnik, Russian expert Alexander Pivovarenko specifically pointed to the multi-vector nature of Serbian policy, which he said can be seen in Belgrade's push to adhere to its European course while continuing to maintain a friendship with Russia and China.

Earlier in the day, Serbian Prime Minister Aleksandar Vucic, who is a favorite in the presidential election that took place on Sunday, said that his country will continue its pro-European policy but is going to maintain friendly relations with Russia and China.

According to him, Serbia's simultaneous cooperation with the EU, Moscow and Beijing is fully in line with Serbia's foreign policy.

He recalled that "this, in general, is in sync with the current Serbian foreign policy line, which is called — the "doctrine of the four pillars."

"Serbia believes that it can build constructive and working relations with Brussels, Moscow, Washington, and Beijing. In general, Serbian policy is a multi-vector one, with Turkish and Arab investments also being in place in this policy. In other words, Serbia is at the crossroads of many vectors," Pivovarenko concluded.

According to the Serbain Central Election Commission, Vucic is winning the presidential election with 59.79 percent of votes after the processing of more than 10 percent of the ballots. The prime minister has already claimed victory in the election.

The second round of election is scheduled for April 16, provided that none of the hopefuls gets 50 percent of votes or more.