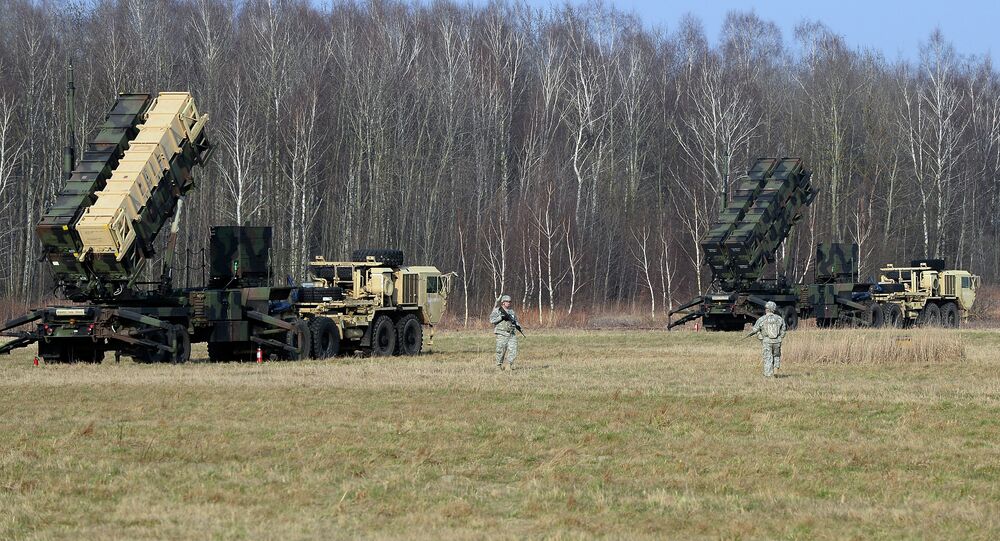 Russia to Take Countermeasures in Response to US Missile Defense System

Russia has been forced to take measures in response to the US plans of deployment a global missile defense system, first deputy chief of the General Staff's Main Operational Department, Lt. Gen. Viktor Poznikhir said.

MOSCOW (Sputnik) — The United States has never provided Russia with data that would refute Moscow's concerns about the US plans to deploy a global missile defense system, and Russia is forced to take appropriate retaliatory measures, while at the same time being ready to discuss the issue, Poznikhir said.

© AFP 2021 / IAKOVOS HATZISTAVROU
Vigilance Test: What's Behind NATO Jet Flights Near Russia's Border
The situation with the missile defense system is one of the key international security issues, which directly affects strategic stability in the post-Cold War world. In 1972, the Soviet Union and the United States signed the Anti-Ballistic Missile (ABM) Treaty. In 2002, the United States withdrew from the treaty, citing Iranian and North Korean missile threats.

During the Conference on Disarmament in Geneva, Poznikhir noted that the elements of the US missile defense system were currently deployed in the continental part of the United States, in Europe and the Asia-Pacific region.

He stressed that the missile defense system being created by the United States provoked a new arms race in the world.

"The missile defense system is a symbol of missile capacity building in the world, which in turn triggers a new arms race," Poznikhir said.

The US is aiming at zeroing the nuclear missile potential of states, which are considered by the US as the most powerful potential adversaries.

Poznikhir said that the existence of the US global missile defense system lowered the threshold of nuclear arms use, because it gave the United States an illusion of impunity.

"The existence of a global missile defense system lowers the threshold of nuclear arms use, because the illusion of impunity of a sudden use of strategic nuclear weapons under an umbrella of a missile defense is being created in the Unites States," he said.

© REUTERS / KCNA/Handout
North Korea May Be 'in Final Stages' of Preparations for Another Nuke Test
Poznikhir stressed that under the pretext of countering the North Korean and Iranian missile threats, the US was deploying a strategic system designed to destroy Russian and Chinese ballistic missiles.

"The US missile defense system already has a potential to intercept Chinese and Russian ballistic missiles and poses a threat to strategic nuclear forces of Russia and China, and these capabilities will only grow," he said.

CALCULATIONS BASED ON CLEAR DATA

"We presented our calculations to our colleagues with the use of models and clear technical data. Unfortunately, we have never been provided with data that could disprove our calculations," he said.

© REUTERS / USFK/Yonhap
Russia Extends Ties With China Amid US THAAD Deployment in S Korea – Moscow
He added that Russia is ready discuss all issues relating to the US missile defense system at the security conference in Moscow scheduled to be held on April 26.

Poznikhir said that the US missile defense system is disproportionate to the North Korean and Iranian threats.

"Thousands of interceptors against several limited-capability missiles of Iran and North Korea is too much," he stressed.

Poznikhir estimated at the Conference on Disarmament in Geneva that the number of US missile defense interceptors is expected to exceed 1,000 by 2022, potentially exceeding the number of warheads deployed on Russian intercontinental ballistic missiles in the future.

Poznikhir said that the United States' long-range radars in Alaska, Romania and Poland increase its ability to intercept Russian missiles.

"The US missile defense system's information and reconnaissance assets are already providing not only detection of the launch of Russian ballistic missiles, their tracking on the flight trajectory, but also the delivery of target designations to combat systems to intercept the ballistic missiles' warheads," he said said.

Poznikhir said that the US radars' information capabilities are expected to grow with the "buildup of a low-orbit ballistic missile detection and tracking system."

"The deployment of mobile sea-based radar near Alaska, stations in Romania and Poland, as well as missile defense information systems significantly improve the speed and accuracy of target designation of Russian intercontinental ballistic missiles, and hence the possibility of their interception," he stressed.

The presence of the US anti-missile bases in Europe, missile defense systems in the seas and oceans close to the Russian territory, creates a powerful secretive potential for the possible sudden nuclear missile strike against Russia.

Poznikhir said that uncertainty over what type of weapons were loaded onto the United States' Navy ships patrolling the Black Sea and the Baltic Sea posed a potential threat to Russia.

© AFP 2021 / IAKOVOS HATZISTAVROU
Vigilance Test: What's Behind NATO Jet Flights Near Russia's Border
"Ballistic missile defense ships patrolling the Black and Baltic seas are a threat to the facilities of the European part of Russia because there is uncertainty over which weapons are currently loaded onto launchers: interceptor missiles or cruise missiles," he said.

"An equally serious threat to Russian and Chinese security is the strike potential of ballistic missile defense groups. US Navy cruisers and destroyers equipped with interceptor missiles are simultaneously carriers of Tomahawk cruise missiles with a range of up to 2,500 kilometers," he stressed.

Poznikhir said that the US missile defense capabilities were a threat to almost all low earth orbiting spacecraft and destroying space activities of countries, including Russia and China.

"Almost all low earth orbiting spacecraft located in the damage area of missile defense systems are under threat. Taking into the account the global nature of missile defense vessels, space activities of all countries, including Russia and China, are under a threat," he said.

Poznikhir said that the United States continued to ignore Russia's arguments of threats to global security in the deployment of its missile defense system.

"Russian representatives repeatedly and at various levels drew attention of the US side to the danger posed by the global missile defense system to the strategic balance of forces in the world," he said.

Poznikhir said that "the arguments are not being perceived, obvious facts are ignored."

The Conference on Disarmament is taking place in Geneva between March 27 and March 31.