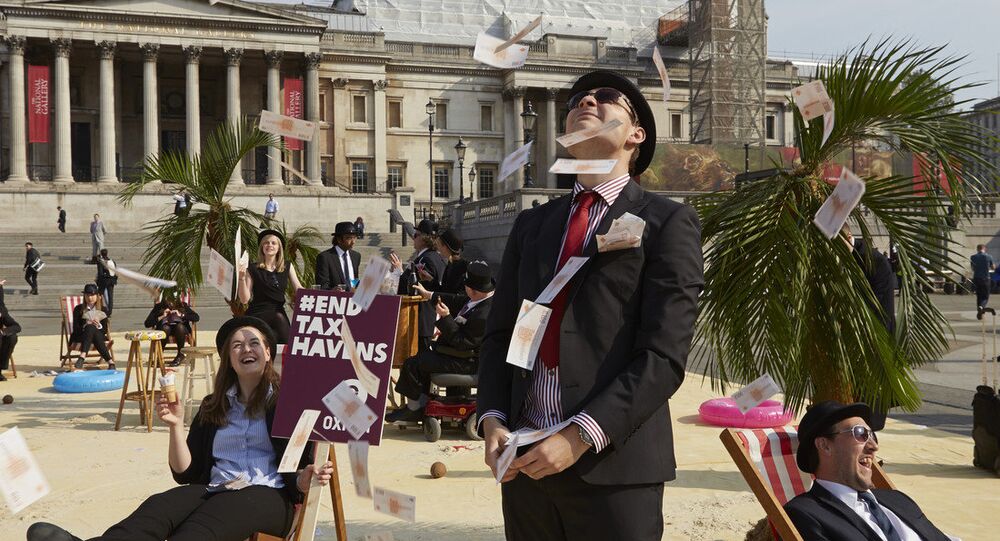 According to reports, the 20 largest banks in Europe are registering approximately a quarter of their profits in tax havens to avoid paying their fair share of taxes or to facilitate tax dodging for their clients.

© Photo : Andy Hall/Oxfam
Crackdown on Tax Havens Would Risk UK 'Crime-Busting Capability'
MOSCOW (Sputnik) – The 20 largest banks in Europe are registering approximately a quarter of their profits (over $27 billion) in tax havens to avoid paying their fair share of taxes or to facilitate tax dodging for their clients, a new report by Oxfam, a confederation of charity organizations alleviating poverty, revealed on Monday.

"The 20 biggest European banks register around one in every four euros of their profits in tax havens, an estimated total of €25bn [$27 billion] in 2015. The business conducted by banks in low-tax jurisdictions is clearly disproportionate to the 1 percent of the world population and the 5 percent of the world’s GDP that these tax haven countries account for," the report dubbed "Opening the vaults: the use of tax havens by Europe's biggest banks" said.

Oxfam pointed out that tax evasion leaded to discrepancies between the profits made by banks in tax havens and the level of real economic activity they undertake in those countries. The report showed, in particular, that for every $108 of activities banks could make some $46 of profit in tax havens, while the global average amounted to around $21.

For instance, Barclays bank, which is the fifth largest bank in Europe, registered about $605 million of profit in Luxembourg and paid just over $1 million in taxes in 2015, meaning the effective tax rate amounted to 0.2 percent.

"At the same time, a number of these banks are registering losses in countries where they operate. Deutsche Bank, for example, registered a loss in Germany while booking profits of €1,897m in tax havens," the report said.

According to Oxfam, Ireland and Luxembourg are the most popular tax haven destinations, with the top 20 European banks making 8.4 percent of their profit from tax havens in those countries in 2015.

Oxfam urged the governments that oversee their respective banks to take action so as to increase transparency, support the use of progressive taxation and spending to reduce inequality and poverty. It also called for the establishment of a clear list of tax havens and to introduce controlling mechanisms.