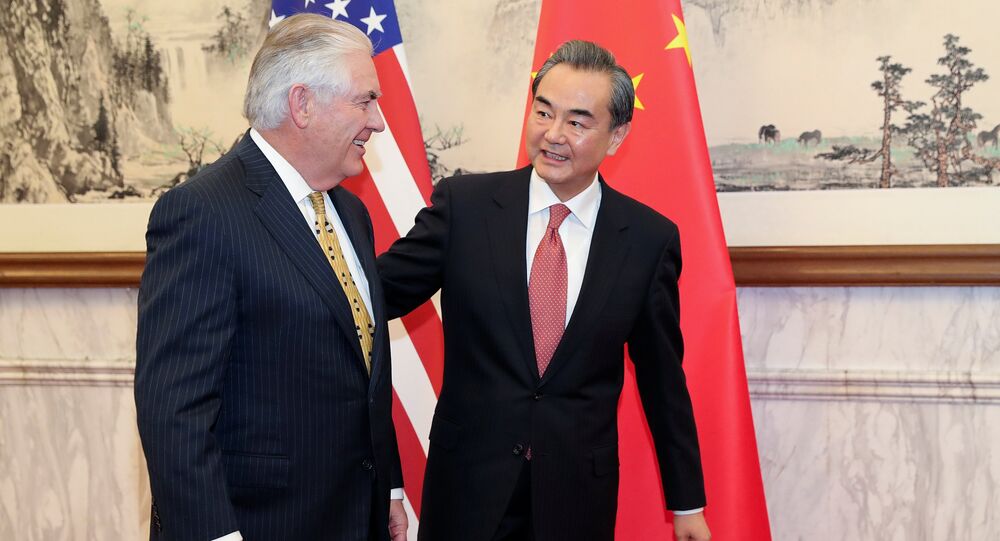 On Saturday, United States Secretary of State Rex Tillerson arrived in China. In particular, Tillerson and his Chinese counterpart Wang Yi discussed security challenges in northeastern Asia and the Asia-Pacific region, including the North Korean problem.

© Sputnik / Maria Sidibe
Tillerson: US Seeks No Conflict With N Korea but Broader Sanctions Possible
According to Tillerson, Washington and Beijing will work together in order to ease tensions on the Korean Peninsula and convince Pyongyang to change its policy.

"We will work together to see if we can bring the government in Pyongyang to a place, where they want to make a different course, make a course correction and move away from their development of the nuclear weapons. But it is with the certain sense of urgency that we both feel, because of the current situation that we have on the peninsula," the US State Secretary said at a press conference in Beijing.

North Korea declared itself a nuclear power in 2005. The US, Japan and South Korea, as well as Russia and China, took part in talks with Pyongyang between 2003 and 2009 on denuclearizing the Korean peninsula, but North Korea withdrew from the talks. Since the beginning of 2016, Pyongyang has conducted a series of missile launches and nuclear tests.

© REUTERS / Hyungwon Kang
Trump Hopes to Meet Xi Soon to 'Chart the Course for Future US-China Relations'
In an interview with Sputnik China, Wang Xiaofeng, an expert of the Center for American Studies at the Fudan University, said that Tillerson’s visit showed that Washington needs cooperation with Beijing in order to influence the North Korean government.

"The US is still looking for assistance from China, in order to implement the denuclearization of the Korean Peninsula. Washington wants to resolve the problem via negotiations, by placing responsibility on China. I don’t think the US will use military force. Diplomacy is much more likely to be engaged," Wang pointed out.

During the talks in Beijing, Tillerson underscored that US President Donald Trump and his administration are looking for new options to overcome the stalemate on the North Korean nuclear problem.

According to the expert, looking for cooperation scenarios with China should be the key factor for Washington.

© AFP 2021 / Ed Jones
US Would Consider Military Action Against N Korea - State Secretary Tillerson
During his recent visit to South Korea, Tillerson said, in addition to diplomatic, economic and security measures, that the military option on the North Korean problem is also on the table if "they elevate the threat of their weapons program to a level that we believe requires action."

Wang suggested that Tillerson’s remark on a "military option" is aimed at convincing China to resolve the problem on its own.

"This statement was addressed directly to China and North Korea. According to Beijing, North Korea should provide security guarantees while the US and South Korea should end their military drills. The US does not agree with that. Washington hopes that China will use its influence and will manage to pressure North Korea," the expert said.

Toby Dalton, co-director of the Nuclear Policy Program at the Carnegie Endowment, told Sputnik China that the main goal of Tillerson’s trip to Asia was to reaffirm Washington’s security commitments in the region.

"Among the most important tasks for Secretary Tillerson in Asia is to reassure nervous US allies about the durability and credibility of the US security commitment. Statements made by then-candidate Trump during the 2016 US presidential campaign exacerbated long-standing fears of US retrenchment. Faced with a more assertive China and a growing nuclear threat from North Korea, South Korea and Japan need to hear that the United States will stand by them, come what may," Dalton explained.

'Too Much Dissent': Why the US Should Cross Its Fingers for Tillerson in China

Tillerson’s Asia Visit: Could US Change Stance on N. Korea Even If It Wanted To?